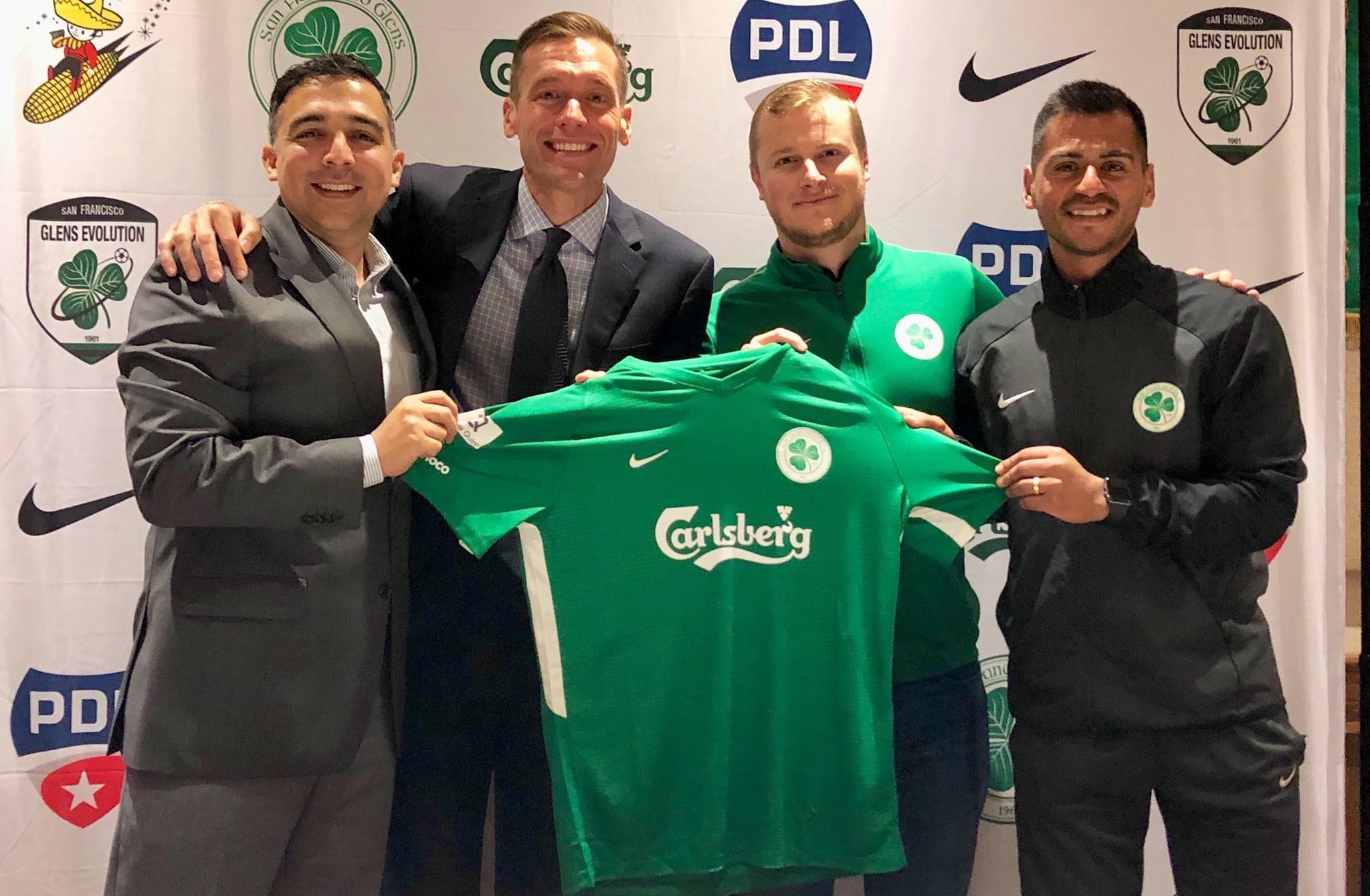 Everywhere Jimmy Conrad has gone he has won. So it's only logical that when the San Francisco Glens had the opportunity to bring the former Major League Soccer defender to their USL League Two organization, they did just that.

Conrad's accolades as a player are extensive and impressive, boasting an MLS Cup in 2001 with the San Jose Earthquakes, MLS Defender of the Year honors in 2005 and 27 caps with the U.S. Men's National Team to go along with an appearance at the 2006 World Cup in Germany. Those are just some of his highlights.

What's even more impressive though is how Conrad became the successful player and public figure that he currently is.

And for that very reason is why Conrad was hired by the Glens. As he'll tell you, he can relate to "every single player" he comes in contact with that aspires to be a pro, an asset that makes him the ideal candidate to groom the club moving forward.

“I won’t try and be the alpha male in the room, but I don’t think there’s going to be much push back when I tell my guys about my experiences and showing them how they can get where I’ve been as a player," Conrad told USLPDL.com. "I’ve lived these things, so I have the experience necessary to get these guys to that point."

“I think what I bring to the table is that I can relate to every single player on team because I was a walk on in college, so I had to fight for that. After school, I wasn’t drafted so I had to go down to the A-League in a bunch of games, which was the USL equivalent at the time. You learned how to be a pro even without making that much money. I was only doing it because I love the game and I was seeing if I was good enough to do it.

"I knew the money would come if I worked hard and I did things right. It took some time, but I got into MLS after I signed a one-year contract. Then I became a spot starter before I started earning more minutes. And then I became a starter, an All Star and eventually Defender of the Year, on top of reaching the U.S. Men’s National Team.

“That’s on a professional level, but then there’s a bunch of things that happen to you personally as well, and it’s just something that I think I am able to relate to these guys and ultimately make a really good impact for them and help them progress to whatever they aspire to be.”

Conrad has a witty personality, one that has made him a social media star across BeIN Sports, Twitch, YouTube and other social and digital platforms. And while he certainly gives off that same persona behind the scenes, he possesses a knowledge of soccer that makes him a huge asset to the Glens.

Conrad is the first to admit that he's done a lot of finger pointing at the things U.S. Soccer, MLS and individuals clubs have done wrong over the years, however, his new endeavor in San Francisco is his opportunity to take action and set a new standard for how clubs should be run through his vision.

“But when it comes to knowing the game and breaking down soccer, and basically being a soccer nerd, I’m your guy. I could talk for hours and hours about how the game should be played and all these sorts of philosophies that I would incorporate in the game, not mention the best ways for us to develop young players. Honestly though, the thing that stuck with me most though was being a part of the Premier Development League. It’s right there in the name, even if it’s not what the league is officially called anymore. We’re here to develop players. We’re here to make them better. And I want to absolutely be a part of that.

“I would be foolish or naive or I’d be lying if I didn’t say that when I do something I’m jumping in with both feet. If I want to be a coach and a technical director, I’m going to be the best coach and technical director possible. I have ambitions, and so do the Glens. We’ve really been aligned in a lot of different ways. Since they got a youth academy beneath them with a strong base of players, not just within the Glens but in the San Francisco Bay area, it really spoke to me and I knew I wanted to figure out a way to work with the Glens.”

A learning curve as a player, coach or any sort of role is always a tricky one, but Conrad has already embraced that and recognized that he won't know everything immediately when he begins the 2019 League Two season.

In particular, with Conrad balancing duties as technical director and associate head coach.

“In Year 1 for me it’s all about learning," Conrad said. "I think there’s a lot going on in this country, and at times it feels fractured so I am excited that the USL is trying to get everybody under the same umbrella and make it more cohesive. I’m excited to be involved with this league and our Glens club as we both continue to evolve. I know that I’m not going to know everything, and I’m definitely not going to pretend that I do.

“Honestly I believe that is one of our biggest issues, especially at the youth level, when you’ve got teams competing because they believe they know more than the other one and there’s only one right way to do things. That’s obviously a generalization and only one example, but it feels like sometimes we only care about protecting our own egos, and in turn, that makes us more territorial and we lose our main focus which should be developing our players.

“For example, I’m not saying this is going to be happen, but I would be open to if we had a talented player with the Glens and we saw a situation where another team could potentially give him a better opportunity to play around better players, a coach with more experience or a more established club, I want us to be more open to sharing players and maybe letting that player go because that’s what is best for that player. I want to create an environment and a culture where we’re working with each other because that’s what will help players and help the sport in this country.”

Conrad also believes that his job should include assessing what's in the best interest of a player and what their future may hold once they are done playing.

As he pointed out, only a small percentage of any athletes in their respective sports go on to play a high level, so life after their career has ended should be something seriously discussed.

“You can see at 15 or 16 years old which players have an eye for detail and would make a good coach or technical director or potentially have some sort of role in a team when their playing career is over," Conrad said. "What about refereeing? Or this kid has a great eye for scouting. I want to make sure that when we see that type of talent that we don’t ignore it and we’re able to foster it.

“To take it one step further, I would like all of our older players to be involved in our coaching our younger teams because when you get that perspective of what it means to coach and how to communicate then you receive things better from your own coach. I also want kids to referee because even though it’s easy to throw blame in the direction of a ref in the heat of the moment, the fact of the matter is that it’s a very difficult job. I want these guys to know what it’s like to make a split-second decision. These are the types of little things that we want to implement so that we can build well-rounded players and human beings that are going to strengthen our club and community.”

The beauty of the soccer, and something that Conrad also acknowledges, is that the game goes beyond the players and club staff members. It's about the community and fan base as well.

Conrad's publicity is another asset that makes him a right guy to help grow the Glens' brand and help propel the West Coast side to the next level.

“This was another one of my selling points in how I can bring brand awareness to the Glens," Conrad said. "I can talk about them. I can get some people to buy jerseys and ultimately build a following. We’d love to get our own supporters’ club that comes out to matches with drums and makes some noise, and I am going to do my best in helping play a role in that. We have partnerships with YouTube and Twitch as well, which I think gives us a wide scope of opportunities as to how we go about promoting the club.”