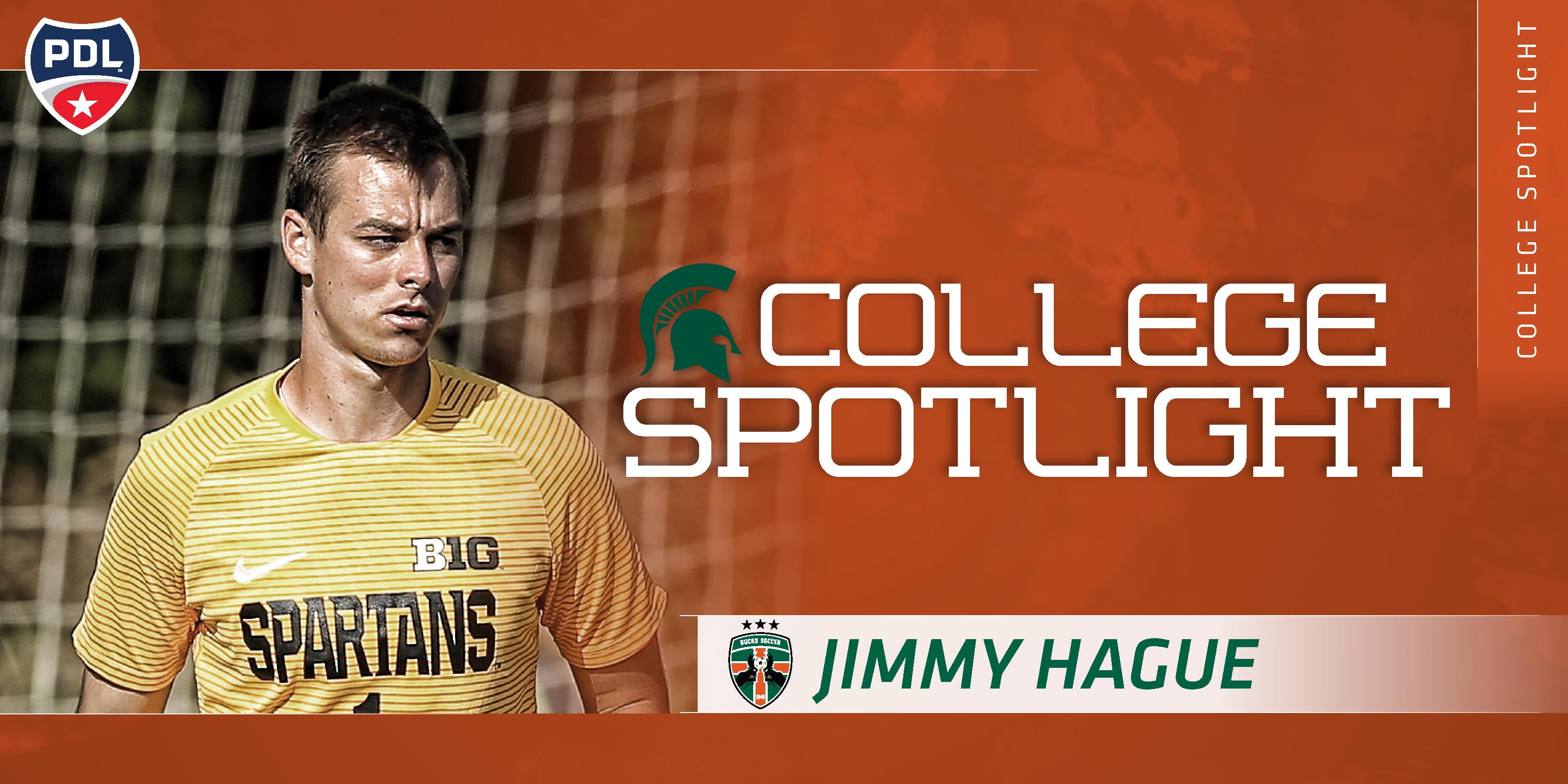 The Michigan Bucks are one of the most consistent producers of professional-level talent in the Premier Development League, sending numerous players to the professional ranks while being perennial PDL Championship contenders.

Playing with the Bucks this summer - after featuring for their in-state rivals Lansing United previously - goalkeeper Jimmy Hague seeks to become another success story in the Bucks' long legacy. While the 2018 season was a rare off-year for the Bucks - the club missed the playoffs for just the third time in its 23 year history - the club gave a good account of itself after a slow start and made a late playoff push that just fell short. It also never lost sight of its goal - developing top-level talent, including Hague.

For his part, Hague was a valuable member of the Bucks in his first season with the team. He appeared in nine matches in net, allowing just 10 goals for a 1.11 goals-against average, while saving 74.4 percent of the 29 shots he faced. In his nine appearances, the club was a strong 5-2-2 and earned three clean sheets. It also picked up some silverware this summer, winning the USASA Hank Steinbrecher Cup over the 2017 PDL Champion Charlotte Eagles, becoming the first back-to-back winners in the tournament's history.

Now Hague returns to Michigan State for his redshirt senior season, where he's improved every single year. In his most recent campaign, Hague earned first team All-Big Ten honors and was named Big Ten goalkeeper of the year, with 11 shutouts in 18 matches while allowing just 13 goals. He's continued to improve by starting his 2018 season on the right foot, shutting out South Florida and Tulsa in the team's first two matches.

Hague recently spoke with USLPDL.com on how the league helped him remain fit and ready for the collegiate season and helped prepare him for the jump to the next level.

PDL: You were strong in goal for the Michigan Bucks this PDL season, with a 1.1 goals-against average in nine starts. What allowed you to perform at such a high level?

Jimmy Hague: I think just working hard, to be the best that I can be, over the years. Staying focused on goals and always being determined to get better.

PDL: You finished the season as the No. 23 PDL Top Prospect and were also named to the Top College Prospects list heading into the fall. What does that recognition mean to you?

JH: It is an honor to be recognized on that list and humbles me. It shows that the hard work in training has been paying off and encourages me to work harder to reach that next level.

PDL: You’ve started your collegiate season with Michigan State on the right foot, posting two shutouts in the team’s first two matches, how did the PDL help contribute to your hot start?

JH: The PDL allowed me to stay fresh over summer and train at a high level. It allows you to play with new players and coaches, to learn and expand your knowledge of the game. Training every day, I could work on weaknesses and improve my game for the fall season. A new environment with different coaches made me see different opportunities to get better and learn new tactics.

JH: I believe the improvements every year show how hard I have worked. I want to keep improving individually, which in return will make our team better. As a team, I would like to win the Big 10 regular season title and make a deep run into the tournament this year. MSU has been to the elite eight round twice since I have been here, so taking it one step further and getting a chance at the title would be a pretty special for the school.

PDL: Being from Michigan and competing at a Michigan college, what are some of the positives of having a PDL club (now two with your former club, Lansing United, having joined) so close to home?

JH: I think it is a huge positive. It gives Michigan State players two great places, close to campus, to train and improve over the summers. It also allows young players more opportunities to watch high-level soccer and expand their love for the game.