TAMPA, Fla. — Ahead of Saturday’s PDL Championship between Reading United AC and Calgary Foothills FC, the 2018 Premier Development League All-League Team and Awards have been revealed.

Among the selection are seven players from the most recent edition of the 2018 PDL Top Prospects list. Also included are two players from Calgary Foothills FC - goalkeeper Marco Carducci and forward and No. 50 prospect Moses Danto - and one from Reading United AC - midfielder and No. 1 prospect Aaron Molloy - who will compete against one another in Saturday’s PDL Championship at Gurski Stadium in Reading, Pennsylvania, kicking off at 7 p.m. ET (WATCH: USLPDL.com) 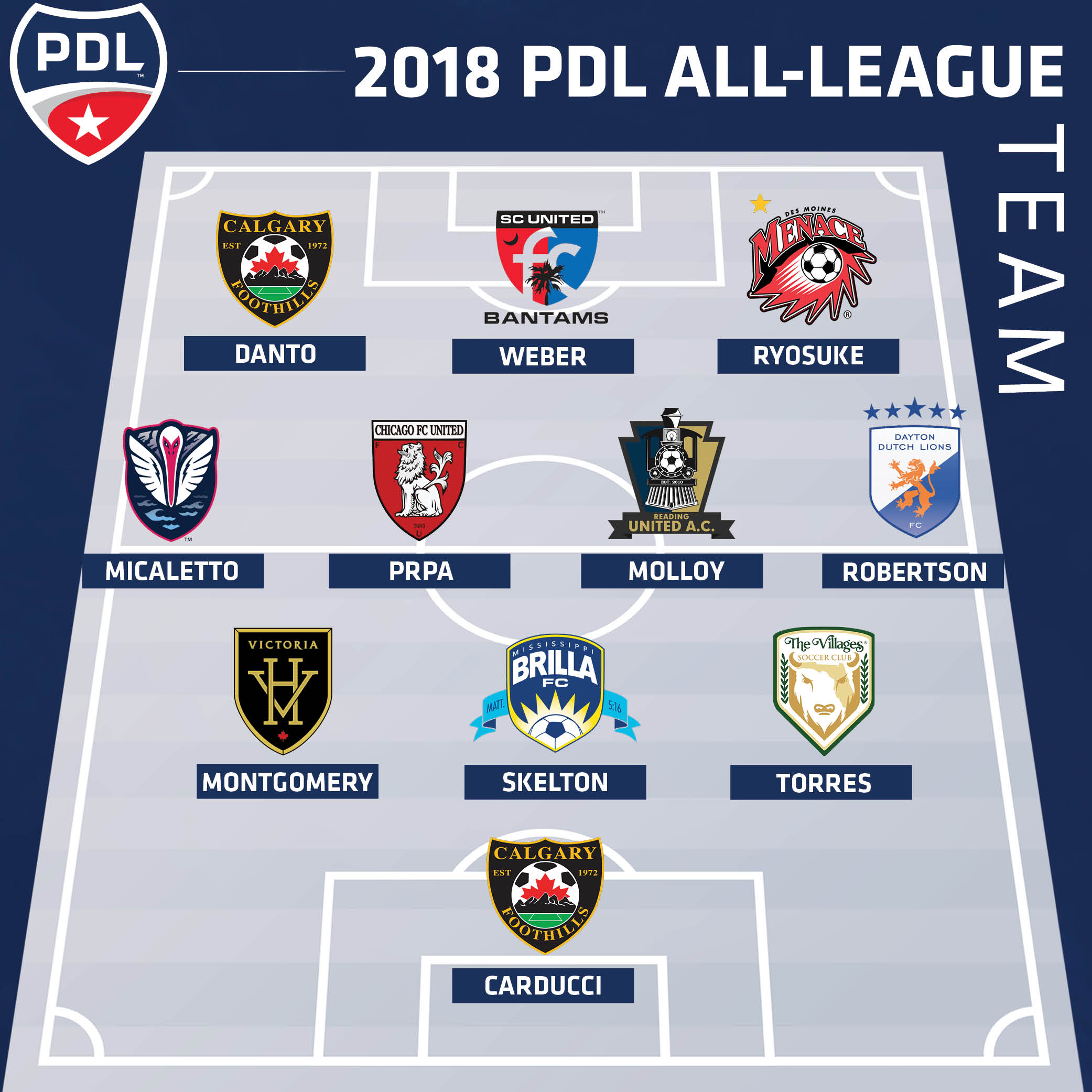 GK - Marco Carducci, Calgary Foothills FC: Appearing in 13 matches (945 minutes) for Foothills FC this season, Carducci was phenomenal in net, allowing just five goals for a 0.48 goals-against average. He also recorded a save percentage of 85.3 and made 29 total stops on the season.
D - Jordan Skelton, Mississippi Brilla FC: An absolute rock for Brilla FC in the back, Skelton played every single minute of all 14 matches this season (1,260 minutes). Along the way, the rising senior at Lander University and No. 6 prospect league-wide collected four clean sheets, three goals and one assist.
D - Gabriel Torres, The Villages SC: In his second season with The Villages SC, Torres’ solid defensive work helped the club return to the playoffs after an absence in 2017. In his 13 appearances (1,058 minutes), Torres also recorded three assists, continuing a consistent offensive theme in the rising junior from the University of D.C.’s career.
D - Callum Montgomery, Victoria Highlanders FC: Montgomery took part in 10 matches for Highlanders FC this season (882 minutes), scoring two goals while helping the defense to two clean sheets. The No. 19 prospect league-wide returns for his senior season at Charlotte this fall.
M - Aaron Molloy, Reading United AC: The No. 1 PDL Top Prospect - and 2017 Young Player of the Year - earned that placement in 2018, recording four goals and a team-leading four assists across 13 appearances (1,037 minutes). His play as a holding midfielder dictated the vast majority of Reading’s matches, and will likely do so for Penn State this fall.
M - Tate Robertson, Dayton Dutch Lions: The No. 32 prospect league-wide, Robertson appeared in 13 matches for Dayton (1,104 minutes) and was the team-leader in assists with seven, while also contributing six goals as the Dutch Lions won the Great Lakes Division for the first time. He will spend his senior season back at Bowling Green this fall.
M - Luka Prpa, Chicago FC United: The No. 34 prospect league-wide, Prpa appeared in 12 matches for Chicago FC United (949 minutes), scoring two goals and recording an assist while helping marshal the midfield to four clean sheets. Prpa returns this fall to Marquette University for his junior season.
M - Marco Micaletto, South Georgia Tormenta FC: Appearing in 11 matches (803 minutes) for the unbeaten Tormenta FC, Micaletto was the team-leader in goals with four, while also tallying two assists. The rising senior and No. 24 prospect league-wide will transfer to Akron for his senior season.
F - Kinoshita Ryosuke, Des Moines Menace: Appearing in all 14 matches and leading the team with 1,211 minutes, Ryosuke was one of the stars of the season for the Menace. The rising senior - transferring to Louisville this fall - recorded 17 goals, second-best league-wide, and three assists while helping his club win the Heartland Division and finish as PDL Regular Season Champions.
F - Marek Weber, SC United Bantams: Appearing in all 14 matches for the SC United Bantams (1,091 minutes), Weber’s 18 goals were good for best in the entire PDL, and he added an assist on that as well. The Le Moyne graduate student scored more than half of his team’s total goals this season.
F - Moses Danto, Calgary Foothills FC: Appearing in 10 matches (787 minutes) for Foothills FC, Danto led the team in goals with 11, and racked up two assists as well. The No. 50 prospect league-wide had a standout match on June 17 against the TSS FC Rovers saw him record four goals and one assist while being named PDL Player of the Week.