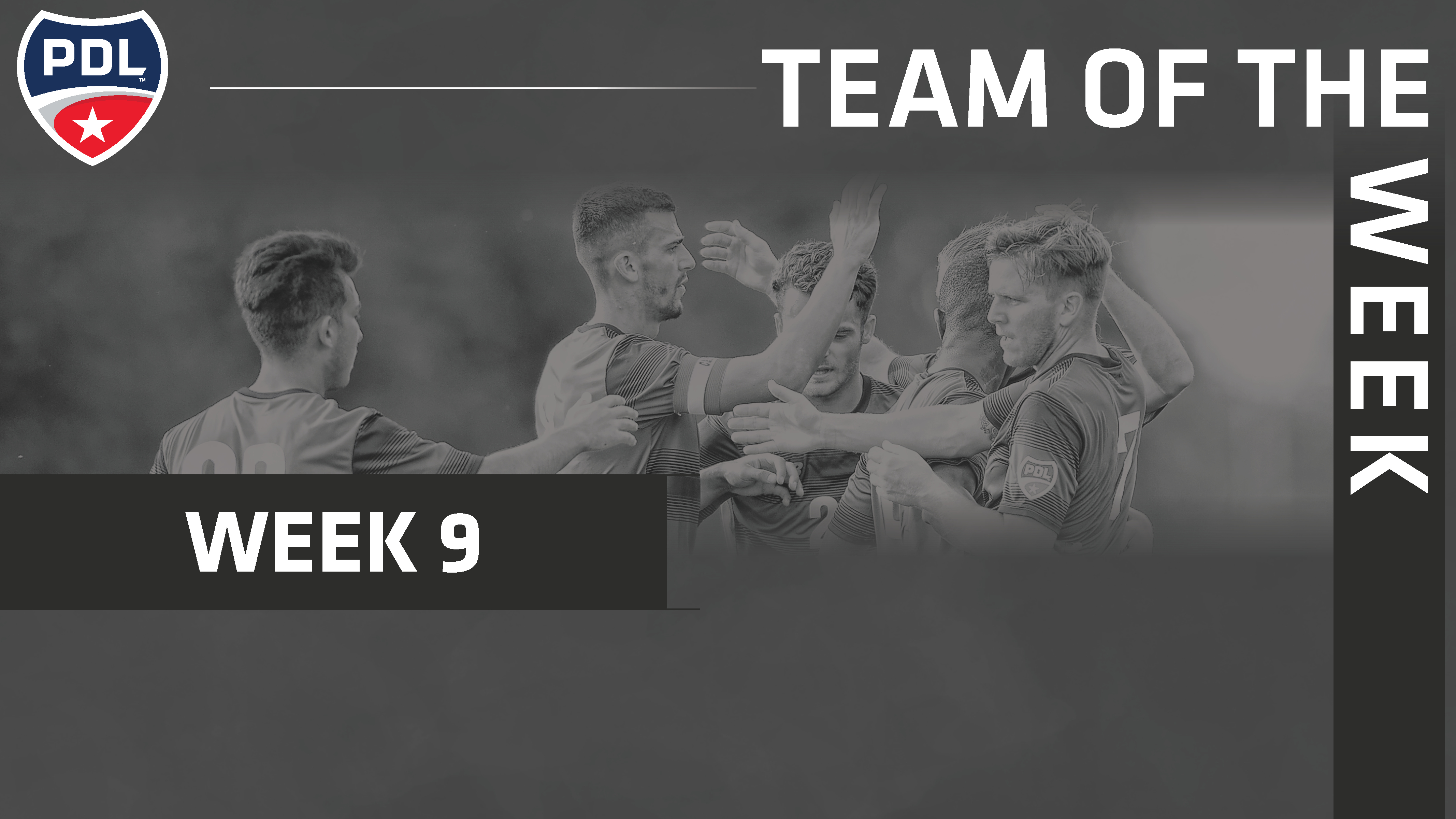 In a huge week for Brazos Cavalry F.C. that saw the club move to the top of the Mid South Division standings, nobody had a better week than forward Brandon Guhl.

In the team's midweek 3-0 shutout of the AHFC Royals, Guhl scored his first two goals of the week, including the game-winner. He followed that up with a three goal, two assist performance in Brazos Valley's 8-1 blowout of FC Cleburne for a total of five goals and two assists on the week.

Here's a look at the full PDL National Team of the Week in Week 9. 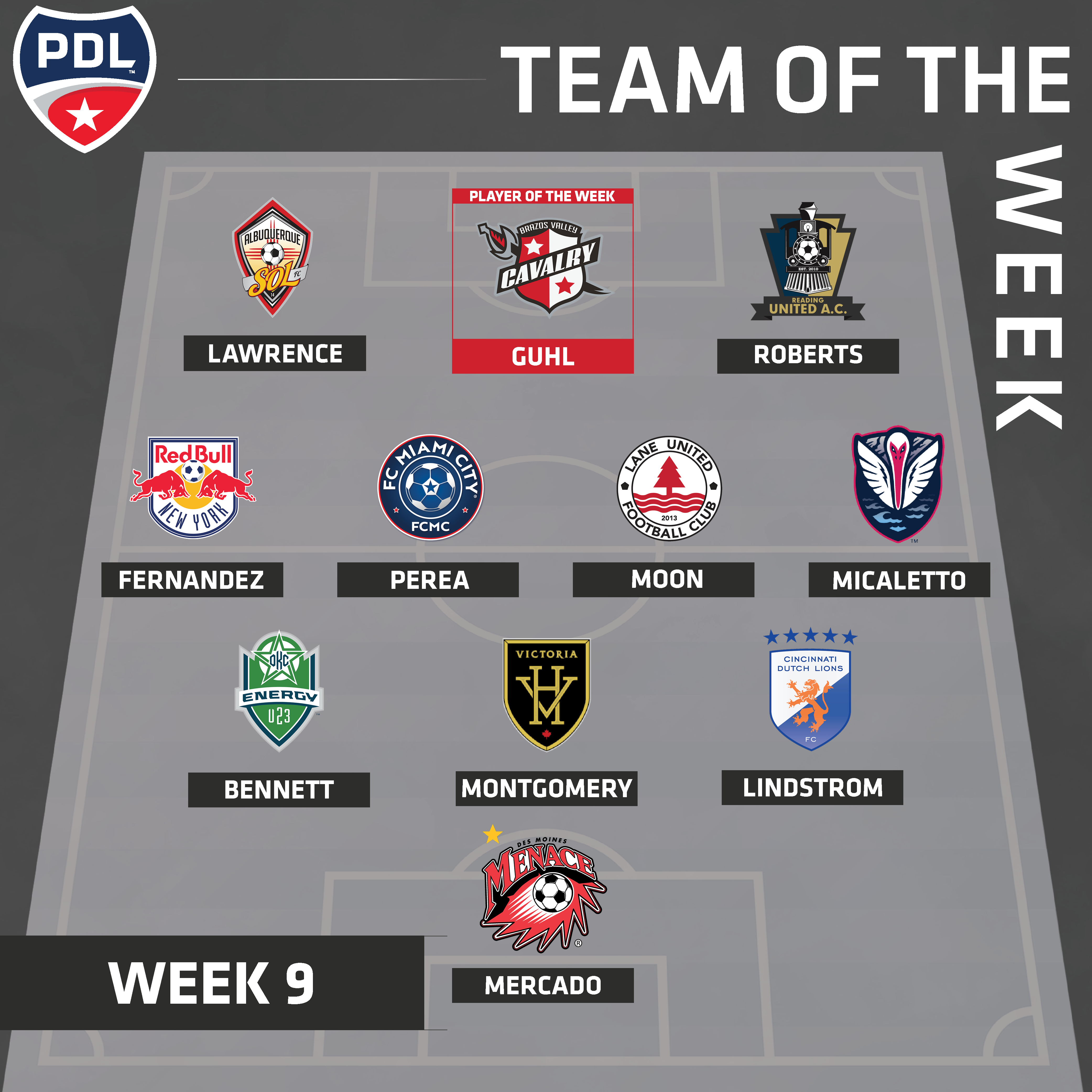 GK - Carlos Mercado, Des Moines Menace: In the week in which the Menace secured the 2018 Heartland Division title, Mercado was stellar in goal again, shutting out Kaw Valley FC.
D - Mark Da Silva Lindstrom, Cincinnati Dutch Lions: The Cincinnati Dutch Lions picked up a pair of wins last week over Lansing United and the Derby City Rovers, with the former being a shutout thanks to good defensive work from Lindstrom.
D - Callum Montgomery, Victoria Highlanders FC: Montgomery went the full 90 minutes in Highlanders FC's two matches last week, providing rock solid defense and generating several offensive opportunities as well.
D - Louis Bennett, OKC Energy U23: After a tough midweek loss for the Energy U23, the club bounced back for a 5-2 weekend win over Corpus Christi FC, in which Bennett assisted three of the teams goals on the offensive end.
M - Marco Micaletto, South Georgia Tormenta FC: As Tormenta FC continued their now nine-match win streak, Micaletto scored once and had two assists in the team's two wins over SC United Bantams and the Charlotte Eagles.
M - Nick Moon, Lane United FC: In Lane United FC's five-goal shutout win over the Timbers U23, Moon contributed to three of his team's scoring efforts, striking twice himself and assisting another of his teammates in-between.
M - Bryan Perea, FC Miami City: While FC Miami City picked up two big wins last week, Perea contributed to the closer of the two contests by scoring a late equalizer before assisting the game-winner minutes later over Weston FC.
M - Omir Fernandez, New York Red Bulls U23: While the Red Bulls U23 exploded for 11 goals in two wins last week, Fernandez was a crucial part of the offensive movement, scoring three goals and picking up an assist across both matches.
F - Kieran Roberts, Reading United AC: While helping take Reading United to the cusp of a Mid Atlantic Division title, Roberts shined in the team's 6-1 win over Evergreen FC, burying four goals himself to take the team lead on the season.
F - Brandon Guhl, Brazos Valley Cavalry F.C.: Nobody had a better week nationwide than Guhl and Cavalry F.C., as the forward struck five times and assisted two others in a pair of huge wins that boosted the club to the top of the Mid South Division.
F - Luke Lawrence, Albuquerque Sol FC: While Sol FC were taking four of six points off the division-leading Rapids U23, Lawrence was getting it done in front of goal striking four times - once in the draw and picking up a hat-trick in the win.