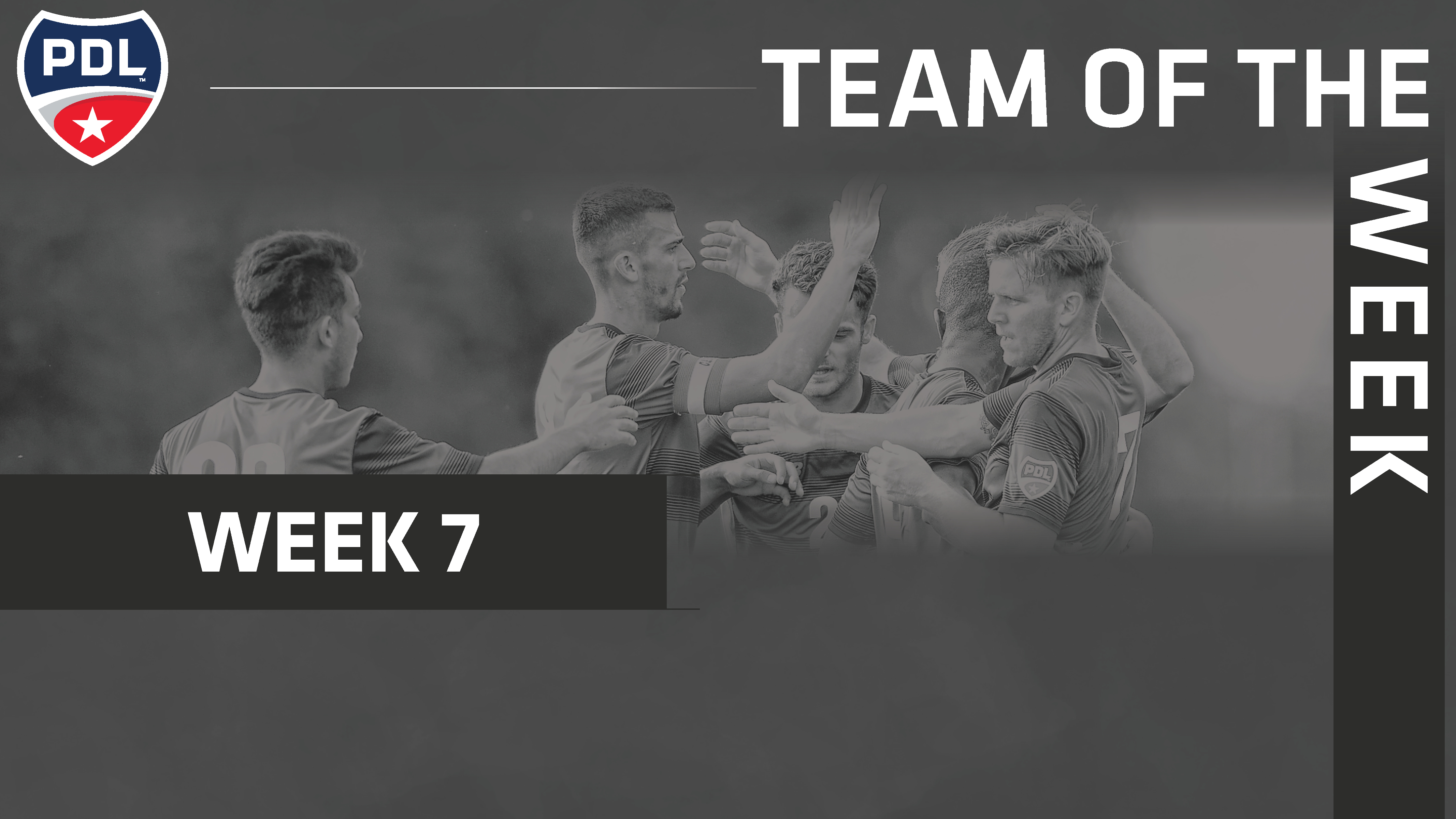 In a week where the Myrtle Beach Mutiny secured two wins while scoring 11 goals, midfielder Romario Piggott struck for five of those himself to earn the nod as PDL Player of the Week in Week 7.

In the team’s midweek, 6-0 shutout against the Charlotte Eagles, Piggott bagged a hat-trick within the span of 17 minutes before adding a fourth later in the second half.  He followed that up by adding a fifth goal on the week in the team’s 5-3 comeback win against the Carolina Dynamo.

Here’s a look at the full PDL National Team of the Week in Week 7. 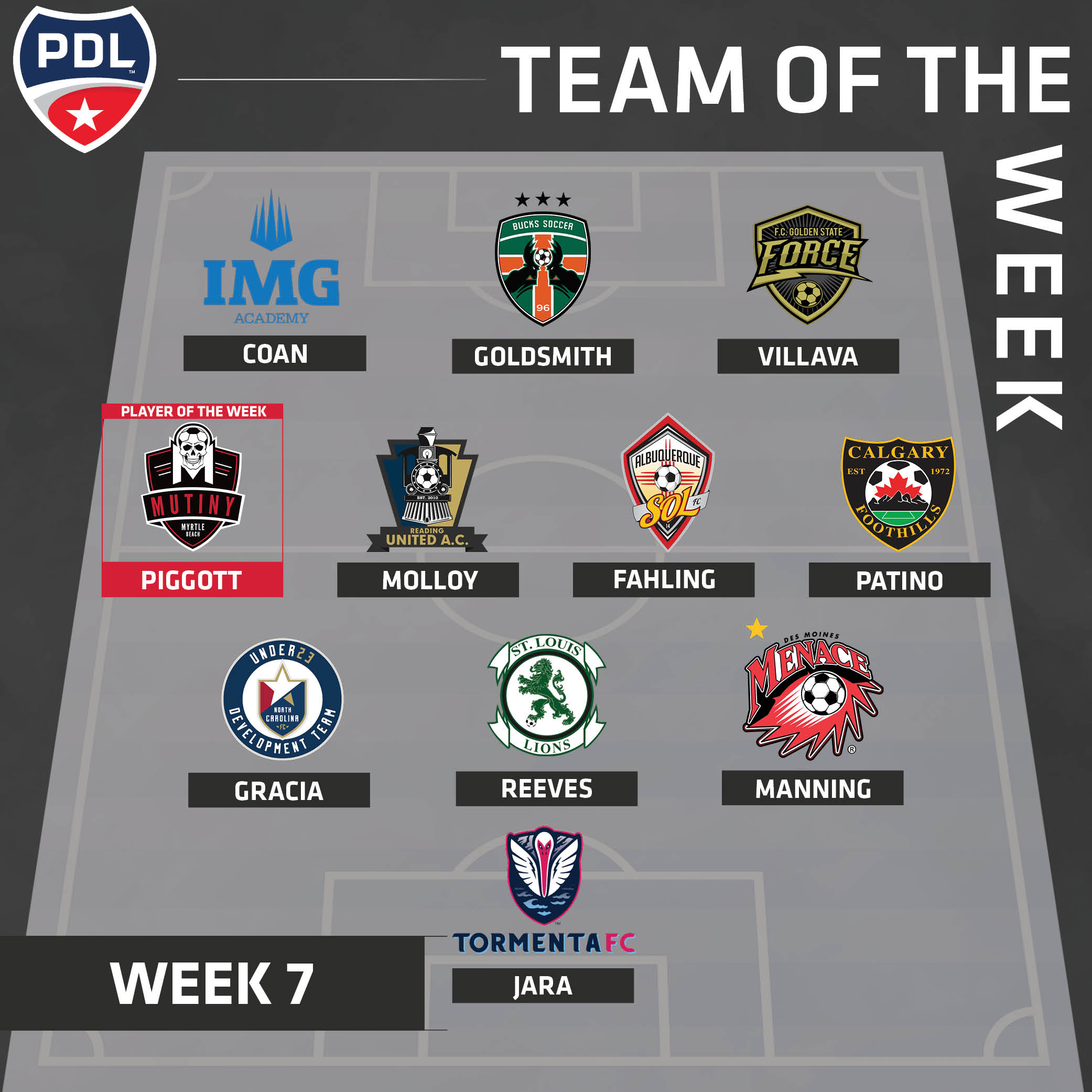 GK - Pablo Jara, South Georgia Tormenta FC: A pair of shutouts against Peachtree City MOBA and Memphis City FC makes it three straight for Jara and Tormenta FC, and five in their last six.
D - Anthony Manning, Des Moines Menace: Manning and the menacing Menace defense recorded a 1-0 shutout against the Thunder Bay Chill, with Manning also knocking in the game-winning goal.
D - Troy Reeves, St. Louis Lions: In the Lions’ upset victory over Chicago FC United, Reeves was not only valuable in defense, but also found the back of the net with the game-winner at the hour mark.
D - Jamil Gracia, North Carolina FC U23: In NCFC U23’s bounce-back shutout win over Lionsbridge FC on the road, Gracia was incredibly valuable in defense and picked up an assist.
M - Carlos Patino, Calgary Foothills FC: In a three-win week on the road, the Foothills FC defense was massive, allowing just one goal. Patino also contributed offensively with a pair of assist in the third match of the week.
M - Quinn Fahling, Albuquerque Sol FC: In Sol FC’s massive victory over rivals FC Tucson, Fahling picked up both an assist and the game-winning goal in the first 45 minutes.
M - Aaron Molloy, Reading United AC: As Reading United continues to roll, still unbeaten, Molloy has picked up the pace, scoring three goals in a pair of wins over the Nor’easters and Lehigh Valley.
M - Romario Piggott, Myrtle Beach Mutiny: Nobody had a better week that Piggott and the Mutiny. The midfielder scored five of his team’s 11 goals in a pair of wins, including four in the first of those two.
F - Samuel ‘Goni’ Villava, FC Golden State Force: Another pair of wins for the Force and another trio of goals from Villava, who further cements himself as a legitimate Golden Boot contender.
F - David Goldsmith, Michigan Bucks: After a tough midweek result, the Bucks finally found their footing in a 6-0 thrashing of the Derby City Rovers, particularly Goldsmith with one goal and three assists on the day.
F - Josh Coan, IMG Academy: The men from Bradenton picked up a big road win over Weston FC, with Coan the primary driving force, as his hat-trick secured the 3-2 result.