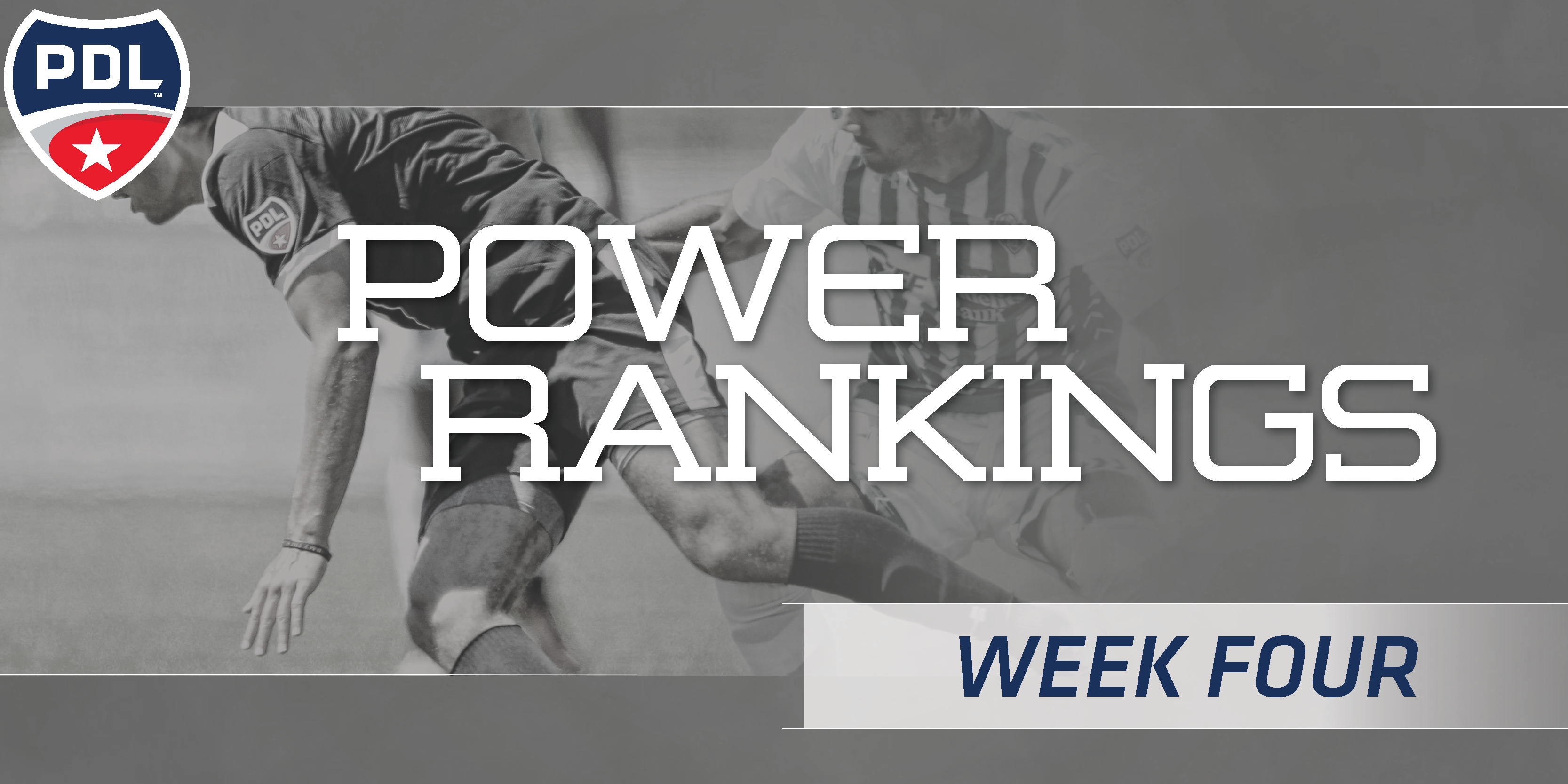 Three of the four conference-leading clubs did enough to hold onto their top spots in Week 4 of PDL action, but beyond that it was free reign, with eight teams making their power rankings debut.

Here’s a look at the power rankings for Week 4.

Reading United AC hangs on to the top spot out East, earning yet another 2-0 victory over FA Euro New York, their third consecutively to start the season. Their perfect defensive record narrowly edges out the Long Island Rough Riders, who are also 3-0-0 to begin their 2018 campaign after a 1-0 win over FA Euro. The Charlotte Eagles also boast a perfect 2-0-0 record, defeating the formerly unbeaten Tobacco Road FC, 2-1, last week to rise from fourth to third. Making their power rankings debut are the Boston Bolts, who’s win over the Seacoast United Phantoms this week leaves them with wins over the top two Northeast Division finishers from 2017. The New York Red Bulls U23 round out the top five, making their return with a third-consecutive win, 4-0, over the Ocean City Nor’easters.

Lansing United have emerged as the top contender in the Central Conference, earning a surprising 1-0 win on the road over the perennial PDL powerhouse Michigan Bucks. The Dayton Dutch Lions follow closely, blasting from fifth to second this week after two big wins on the road over the Michigan Bucks and at home over the Derby City Rovers, 5-1. The Des Moines Menace sit in third, making their return to the top five, after opening their season with a pair of wins over WSA Winnipeg and on the road against the St. Louis Lions. Kaw Valley FC’s first two wins in team history over WSA Winnipeg earn them an inaugural rankings appearance, while the West Virginia Chaos remain unbeaten at 1-0-2 after a draw with Tri-Cities Otters and a win over the Cincinnati Dutch Lions.

In the Southern Conference, Texas United continued their remarkable start to the season with a 4-2 win over Corpus Christi FC, moving into the top spot while averaging four goals per match through three games. SIMA Aguilas have bounced back from a season-opening draw with three straight wins, including two this week on the road against FC Miami City and at home over IMG Academy, rising all the way to second. The Lakeland Tropics settled for a high-scoring draw against North County United and slipped to third, while South Georgia Tormenta FC’s 1-0 win over SC United Bantams bumps them into the top five at fourth. Rounding out the group is The Villages SC, who opened their season with a pair of wins over Weston FC and Next Academy Palm Beach on the road.

Out West, the FC Golden State Force lost their first match of the year on the road against Orange County SC, but bounced back with a big win over Fresno FC U23 to remain at number one. Nipping at their heels is Calgary Foothills FC, who earned a win and a draw against the Portland Timbers U23, rising one spot to second while remaining unbeaten. The Colorado Rapids U23 enjoyed a week off and sit in third, still perfect at 2-0-0, while the Ventura County Fusion won twice over the Southern California Seahorses and Fresno FC U23 to rise to fourth. Santa Cruz Breakers FC narrowly hold on to the fifth spot after a draw against San Diego Zest FC.