Lansing, Reading rise to the top of their respective conferences 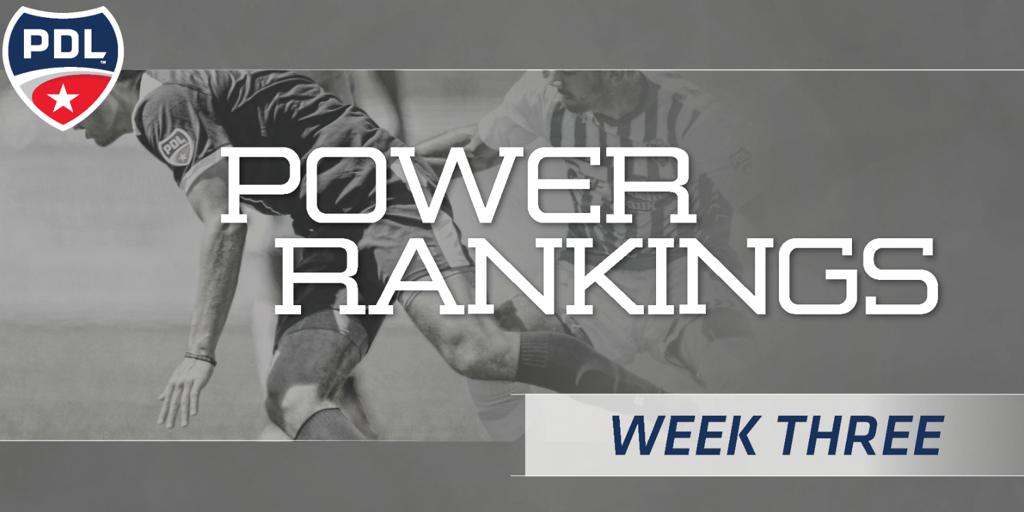 While two teams held onto their pole positions, the Eastern and Central Conferences feature new leaders in Week Three of PDL Power Rankings.

Here’s a look at the power rankings for Week Three.

Reading United AC picked up their second win of the season - both coming in shutout fashion - over Evergreen FC this past week, marking its rise to the top of the leaderboard from second last week. Following closely behind and rising one spot from two to three are the Long Island Rough Riders, who also claimed their second victory in two matches this year. Tobacco Road FC rounds out the two-win unbeaten teams, sitting third after their 3-1 win over North Carolina FC U23. The Charlotte Eagles sit fourth at 1-0-0 after a rainout, while Lionsbridge FC rounds out the top five with a huge 5-1 win over Evergreen.

The Central Conference also has a new leader, as Lansing United picked up a pair of victories this week over the Derby City Rovers and Cincinnati Dutch Lions, each in shutout fashion, to rise to 2-0-1 on the year. The Michigan Bucks swap spots with their in-state rivals, winning their one match against the Derby City Rovers, and have a chance to turn the tables at home this weekend against Lansing. The West Virginia Chaos, St. Louis Lions and Dayton Dutch Lions all picked up season-opening draws this past week, with the Chaos and Dutch Lions doing so on the road.

The Lakeland Tropics continue to lead the Southern Conference, picking up a 3-2 road win over 2017 playoff team FC Miami City to start 2-0-0 this year. The Mid South Division follows closely with a pair of representatives in second and third. Texas United opened their season in stunning fashion, earning a 5-0 derby win over FC Cleburne before going to Oklahoma City and stealing three points from the defending division champions OKC Energy U23. The AHFC Royals picked up their second win of the year in a derby victory over Houston FC, staying perfect through two matches. Corpus Christi FC bounced back after last week’s loss to the Royals, sitting fourth after beating FC Cleburne, and Mississippi Brilla FC sit fifth after defeating Memphis City FC, 2-0.

The FC Golden State Force remain unbeaten and untouched in defense, 3-0-0 after three shutouts, and stay in the top slot after a bye week. Fresno FC U23 are making a run at the leaders, however, with three shutout wins of their own to start the year and now sit in second. Calgary Foothills FC remain third after a bye week, still sitting with a pair of wins over the Victoria Highlanders to start the season. The Colorado Rapids U23 make a jump into the rankings at fourth after two local wins over new member club Colorado Pride Switchbacks U23, while Santa Cruz Breakers FC slip to fifth after falling to the aforementioned Fresno.