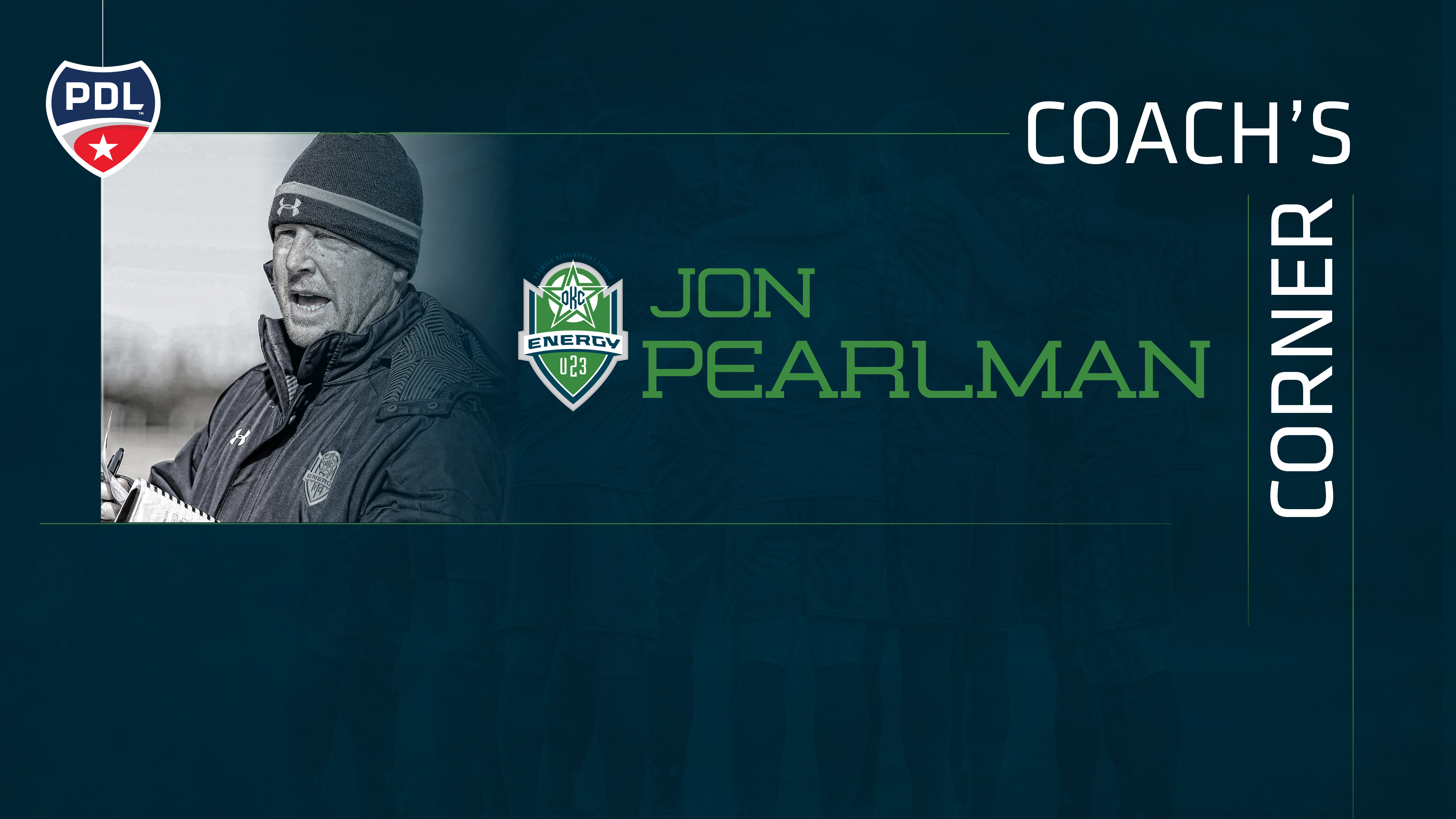 Under head coach Jon Pearlman, FC Tucson won the Mountain Division title in 2017. In taking over Mid South Division Champion OKC Energy U23, Pearlman moves from strength to strength in 2018 and hopes to continue on his new club’s recent success.

While guiding FC Tucson to a 9-2-3 record in 2017, Pearlman worked with several players who would go on to become 2018 MLS SuperDraft selections, including No. 5 overall pick Jon Bakero of the Chicago Fire, Danny Musovski and Kevin Partida of the San Jose Earthquakes, Thomas Olsen of the Colorado Rapids and Afonso Pinheiro of D.C. United. Meanwhile, the Energy U23 had their own successes in 2017, winning the Mid South Division with a joint league-best 12-1-1 record and seeing three of their own players taken in the SuperDraft, led by No. 13 overall selection Eric Dick of Sporting Kansas City. Now, Pearlman seeks to expand both his own coaching experience, as well as the already-successful platform of the Energy FC organization.

Serving as both an assistant coach for the first team as well as making a return to the PDL as lead man for the Energy U23, Pearlman hopes to instill an even more concrete pathway from Energy FC’s youth organization, up through the PDL level and into the USL. As he’s begun establishing himself at the club, Pearlman has been impressed by the growing community integration Energy FC has built, and spoke with USLPDL.com to discuss the club’s deep USL roots and what he envisions for it moving forward.

Read more from Pearlman below in this week’s Coach’s Corner. 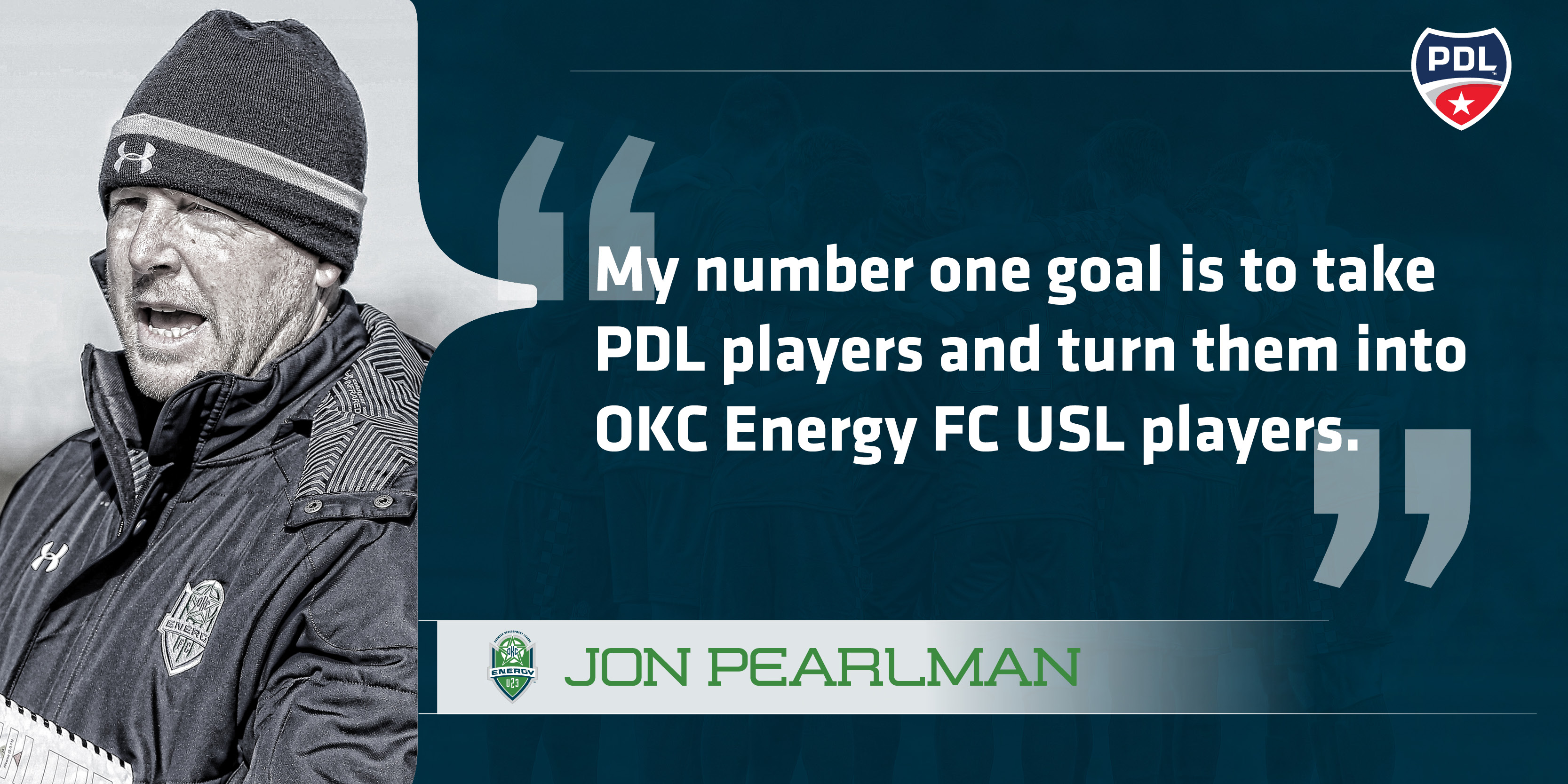 PDL: You had a very successful season with FC Tucson in 2017, winning the Mountain Division with an impressive 9-2-3 record. What made the team so strong this year?

Jon Pearlman: “Certainly the quality of the players. We’ve consistently brought in high-level players that have really made a difference on the field. We had a really hard-working group with good chemistry. As soon as we got settled in during the season, we had a nine-game unbeaten run that I think was key for us closing the season. There was a great sense of purpose within the group to get better and improve themselves both as a team and individually. That turned into positive results on the field.”

PDL: You’ve worked with a number of high draft picks in the MLS SuperDraft, most recently No. 5 overall selection in 2017, Jon Bakero. How do you help players like that prepare for the next level?

JP: “It’s a really great experience. If you look at Afonso [Pinheiro] and Jon, you find yourself with players who arrive early, workout on their own, and stay late to get extra work in. Players like that are receptive to coaching feedback. The truth is, they have enough talent on their own to be successful, but they realize that if they want to push to the next level, there are some things to learn about positional play and working within a system, understanding that the style of play they experience throughout their making the team they’re on better while still improving themselves. Sometimes you get players who get to college and think they’ve already arrived, they’re not as open to suggestion or trying something different, but it wasn’t the case with those two players. I’d say that’s true for all players we had drafted, they’re open to trying new things and different spots to improve their opportunities.”

PDL: You’ve recently taken over as an assistant coach with the USL’s OKC Energy FC, and will be in charge of the U23s there in the PDL. What prompted your move to OKC?

PDL: What are you most looking forward to in your new role with Energy FC?

JP: “I’m already enjoying myself here, along with the challenges of improving a franchise and putting our own vision on it. Steve has done an incredible job of coming here and taking an already fantastic franchise, a top-rated USL and PDL franchise, and seeing how we can take what has already been done and add to it. I’m contributing some of the things I’ve learned as a GM for FC Tucson from an operational and budgetary perspective, anything we can do to help this franchise get better. While I’m most excited to get on the field and watch this team play, because that’s really always the end product, I love all the work and grind that gets you to that point. I’m happy here in OKC and really enjoying it.

PDL: OKC Energy FC are heavily invested into the USL infrastructure, with the first team, a PDL club and teams in the Super Y League. How important is it for teams to pursue that top-to-bottom academy structure in the USL?

JP: “We think it’s very important. In the USL, for long-term success, there needs to be an integration into the local community and a commitment to where your franchise is and building soccer in that area. You can’t just be focused solely on your first team, you should be contributing all the way through the youth levels. The great thing about Energy FC is that we already have that set-up, but we’re still looking to grow soccer overall. Not every player is going to be an Energy FC player, but we want to give every player in Oklahoma, in our community, the opportunity to play at the best level possible. We want to give them a sense of connection to the club as their hometown team. Without growing up playing in a system that you feel connected to because they contributed to your development personally and as a player, I think it’s hard for communities to have a real buy-in to that first team. So we’re committed to supporting the community and the USL itself. If we want our league to be great, we need to be good partners. We'd love to see every team in the USL have some type of youth set-up. The more integrated they can be within that structure, the more it’ll help soccer grow in this country, up through the PDL to the USL levels, right to the very top.”

PDL: You take over a very successful team in the Energy U23s, who won the Mid South Division in 2017 with a joint league-best 12-1-1 record. What are your goals heading into 2018 with the club?

JP: “Well, a 12-1-1 record is so impressive, I think it equaled the best record in the PDL last season. Our direction right now is to get our PDL players playing into our first team at some point, getting more players involved from Oklahoma who have come through our youth set-up and PDL club. For us, it’s a developmental model. While we definitely want to win as many games as we can and compete for a PDL Championship, the real focus is finding players who maybe slipped through the cracks who would fit into our first team at the USL level, possibly event at the conclusion of the PDL season. Another focus is taking our local players, including any younger ones in our youth club, and get them into better competition and challenge them where they can’t just solve problems physically, but need to improve their decision-making and tactical understanding of the game at the higher levels. We want to mix them in with some players we bring in who are top prospects so they can work with those players and see the level to which they are aspiring, whereas at FC Tucson we were trying to bring in the best players in the country, though that was changing there with Phoenix Rising FC taking over as the USL parent club. So my number one goal is to take PDL players and turn them into OKC Energy FC USL players, and to accomplish that, we want to make sure we’re targeting players that want to be OKC Energy FC players.”