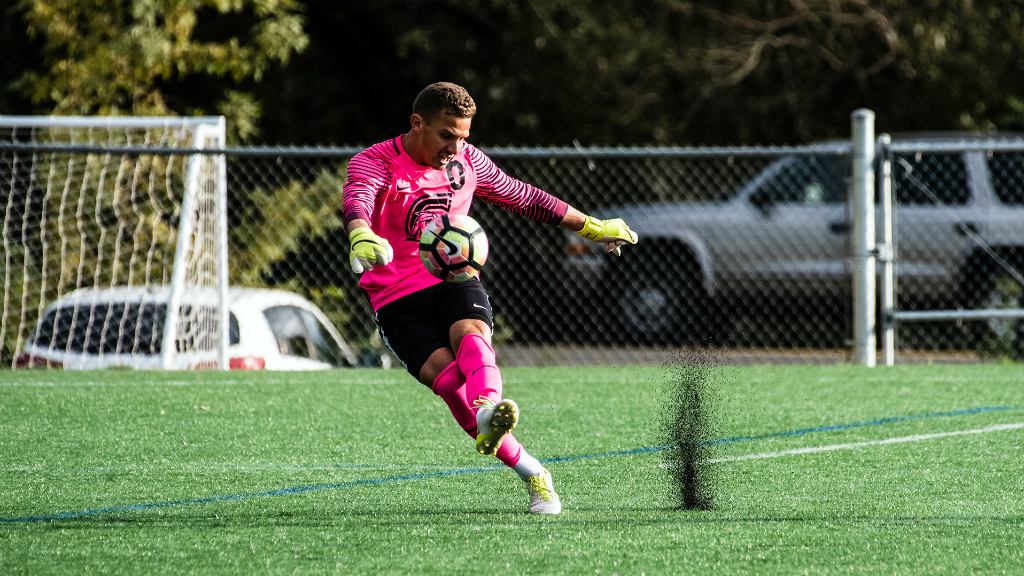 It's a heavy dose of NAIA and NCAA DII action this weekend, with a side-helping of NCAA DI matches as the must-watch games.

Friday opens the weekend slate with a trio of matches, including two big-time ACC showdowns. First, it's an inter-Carolina clash when Duke takes on Clemson with PDL Players to Watch on both sides of the field. They're followed up by a second thrilling ACC contest between Louisville and North Carolina just half an hour later. Finally, it's a bit of NAIA action as Corban takes the field against a top conference challenger in Rocky Mountain College.

The remaining three must-watch matches all take place in NCAA DII and all occur on Saturday. First, the University of D.C. and LIU Post clash in the early afternoon with three PDL players split between the two teams. In the mid-afternoon, Adelphi will take on Merrimack with both teams unbeaten in their conference. Finally, Young Harris and Lander close things out with a top-25 clash.

The first match of the weekend kicks off Friday with a big ACC clash in NCAA DI between Duke and Clemson.

The Blue Devils enter Friday night with a strong 10-2-1 record this season, but have struggled in ACC play with a 3-2-0 mark after losses to Louisville and North Carolina, who play slightly later on Friday. With three of their last four matches taking place in-conference, the Blue Devils have a chance to reassert themselves in the ACC starting with a win against Clemson. Leading the way for Duke will be a pair of New York Red Bulls U23 players, with defender Markus Fjortoft and forward Brian White hoping to lead the way to a victory.

The Tigers sit slightly behind the Blue Devils with a 9-3-0 mark and 2-3-0 record in ACC play, but close out their schedule with three straight ACC matches and could rebound. That begins with taking a win from Duke on the road. Led by Nashville SC U23 defender Tanner Dieterich and SIMA Aguilas midfielder Malick Sarr Mbaye, the Tigers will hope to bounce back from losses in two of their last three, to Notre Dame and Wake Forest, to get things back on a winning track.

The Cardinals enter Friday’s showdown with a 9-1-2 record this season, including an impressive 4-1-0 in the crushing ACC, and have won three straight including a 1-0 victory over No. 12-ranked Duke in recent weeks. Those three wins have come via three straight shutouts, as the Cardinals defense has kept opponents off the scoreboard while the offense, led by FC Tucson forward Tate Schmitt, has scored seven goals.

North Carolina boast a similarly impressive 11-2-0 record this season, including a matching 4-1-0 ACC record, putting the Tar Heels on equal footing with Louisville. Led from the back by Charlotte Eagles goalkeeper James Pyle and Carolina Dynamo net-minder Alec Smir, the Tar Heels boast an additional trio of PDL Players to Watch in the form of Wilmington Hammerheads FC midfielder Cameron Lindley, North Carolina FC U23 forward Alexander Rose and Tobacco Road FC forward Alan Winn. Unfortunately, the Tar Heels enter on the heels of one of their two losses this season, as they were taken down by Wake Forest last time out.

Friday concludes with a big-time clash between two NAIA powers in the CCC as Corban take on Rocky Mountain College.

The Warriors have been untouchable this season, boasting an impressive 10-0-2 record overall, with a matching 6-0-1 conference record as well, and aim to keep it that way at home on Friday. The Warriors are coming off one of their two draws this year, a scoreless match against Northwest Christian, but won six straight prior to that. Led from the rear by Portland Timbers U23 goalkeeper Jordan Farr, Corban hasn’t allowed a goal in 315 minutes, a mark they’ll hope to keep going while putting at least one in on the offensive end.

Rocky Mountain College have been beaten this year, but sit neck-and-neck at the top of the CCC with Corban regardless. The Battlin’ Bears boast a very impressive 10-1-0 record, just shy of Corban’s mark, and similarly have a 6-1-0 record in conference play. Rocky Mountain enters Friday’s match on a six-match winning streak and, again similar to Corban, haven’t allowed a goal in four straight matches. With two staunch defenses on the field, each team will need to be at their best to break down the opposition.

A bit of NCAA DII action leads us into the weekend proper as a clash between the University of D.C. and LIU Post starts Saturday’s action.

The University of D.C. has enjoyed a stellar season so far, coasting to a 10-3-0 record, including a 4-1-0 record in conference play. Though they recently fell to NYIT in a closely-contested battle, they bounced back quickly with a pair of 2-0 wins over Bridgeport and Seton Hill and will try to make it three straight against a very difficult opponent in LIU Post. Leading the charge offensively for the Firebirds has been The Villages SC midfielder Gabriel Torres, who tops the team with a stunning 14 goals and six assists.

On the other side of the field, LIU Post has been arguably even more impressive. With a 9-0-2 record, 3-0-1 in conference play, the Pioneers still remain unbeaten in the 2017 season. However, they are coming off a recent 1-1 draw with Queens College, their first less-than-perfect result since their season opener against Adelphi, and will need to find their form again quickly in a tough match with the UDC Firebirds. A big part of that falls at the feet of FA Euro midfielder Charlie Ledula, who scored a hat-trick in the team’s subsequent 3-1 victory over Philadelphia, and Jersey Express midfielder Harry Pearse, who picked up an assist in that match.

Saturday continues with another NCAA DII kick-off when Adelphi takes on Merrimack in NE10 play.

The Panthers have been stellar in 2017, with an unbeaten 9-0-2 record, including a dominant 7-0-2 conference mark. Though they battled to a tough scoreless draw with Southern Connecticut State last time out, the Panthers had previously recorded nine straight victories in the build-up to this weekend’s showdown. Led by Mississippi Brilla FC forward Andre De Giorgi, Adelphi will hope to keep their unbeaten record intact on Saturday.

Unfortunately for the Panthers, that won’t be easy against a very difficult Merrimack team. The Warriors boast their own 10-1-1, 7-0-1 in-conference record, and have only suffered a loss to No. 9-ranked LIU Post. Since then, the team has been unbeaten in its last nine matches, with four straight victories by a total 8-1 margin over their past four matches. The match will be huge in both the NE10 and NAIA-at-large, with serious implications for the post-season.

Finally, the weekend’s action comes to a close Saturday night as Young Harris takes on Lander in a top-level NCAA DII battle.

The Mountain Lions boast a 10-1-1 record, including a 4-0-0 conference mark, in 2017, making them a formidable foe. Adding to their difficulty is the fact that the team is on an eight-match winning streak that has now lasted for over a month. During that streak, they took down No. 7 Limestone, No. 21 Carson-Newman, and will try to make it nine in a row against No. 17 Lander on Senior Night. Leading that effort will be Reading United AC forward Marco Micaletto, who has been a rock up front for the Mountain Lions.

Lander, however, are no slouches and will prove to be a tough opponent for the Mountain Lions. The Bearcats boast their own winning streak, now sitting at six matches and sitting just shy of a month, and will try to upset their streaking opponents. If they do so, they’ll earn their 10th win of the season as they currently sit at 9-2-0, with a flawless 5-0-0 conference record. One thing not in Lander’s favor, however, is playing this match away from home, where they’ve been perfect, and instead go on the road where they’ve suffered both of their losses this season.