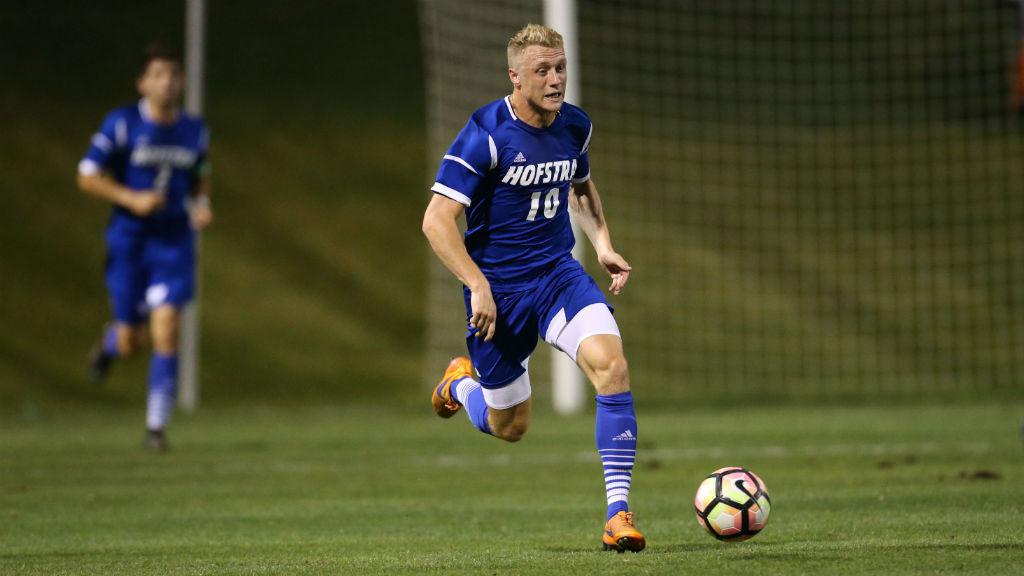 After an illustrious career at Hofstra University and three strong seasons in the Premier Development League, Joe Holland is eager to make his mark at the 2016 adidas Major League Soccer Player Combine in Los Angeles from Jan. 8-12.

Holland, who was recognized on the Top PDL Midfielders in college list, was one of 34 PDL players offered an invitation to attend the combine.

“It’s an honor. It’s something I’ve worked very, very hard for – to kind of be recognized to the extent that I’m invited to something like this,” Holland told the PDL, “but, at the same time, it sounds cliché, but it means nothing yet. If I go to the combine and don’t play well and don’t impress teams, there’s no point.

“So I’m very happy I’ve been invited, but as soon as I saw my name on the list, all it did was serve as motivation for the next few weeks going into the combine.”

That drive is nothing new for Holland, who has played in the PDL for the past three summers while shining at the collegiate level.

In his first two PDL seasons, Holland played for the Long Island Rough Riders, where a lot of his university teammates and program alumni have competed. Holland was a key player for the franchise those two years, scoring seven goals and recording 11 assists in 18 games.

“At the fundamental level, I just can’t stop myself from playing,” Holland said. “I always want to play, I always want to train, so I could never really have a summer where I didn’t train full-time. The first year I played for the Rough Riders, but I was in England for the first three weeks just training and competing, but if I could train and play every day in a professional setup in America and enjoy that and get some exposure, then I prefer that than training by myself in England every day. Either way, I’m going to train and play every day, so I thought I may as well do it in a professional setup in America and enjoy my summer at the same time.

“PDL exposure has also proven to be helpful for me to get my name around, so that’s also a reason why I played as well.”

Holland, a native of London, England, first made his mark in America at the Dr Pepper Dallas Cup in the Under-19 division during 2012. Playing with Lewisham College, Holland scored four goals in three games to lead his side. His talent was noticed by college scouts in attendance, and Holland – who had never considered a potential playing career in the U.S. – began looking at the possibility of a college career Stateside.

“I picked up and left when I was 18,” Holland said. “I look back on it now, and it seems like a crazy decision, but it’s the best thing I’ve ever done. I’ve thoroughly enjoyed my three-and-a-half years here. It’s been fantastic, and I wouldn’t change it for the world.”

The talented midfielder joined Hofstra in 2012 and went on to be named Colonial Athletic Association Rookie of the Year.

However, Holland recorded his breakout season in 2015. After scoring five goals and providing eight assists for the Rough Riders in the PDL, the 5-foot-10 midfielder netted eight goals and provided nine assists for the Pride in the fall. He was subsequently named CAA Player of the Year and was also named to the National Soccer Coaches' Association All-American Second Team.

Looking to build on his impressive junior year, Holland looked west for a different and challenging experience. He joined the Ventura County Fusion for the 2016 regular season and shined, scoring seven goals in 11 games. Holland then scored three goals and recorded eight assists for the Pride.

“Having a California summer was a very special experience,” Holland said. “I like LA a lot; I went there whenever I could, and Ventura, itself, is a nice place. It’s a kind of beach town we really don’t have on the East Coast.

“The soccer was great. I met some really, really good guys there – a lot of friends that I’m going to have for a long time. The setup was good, the way they run the team is very professional, and they take it seriously in especially the quality of the players. Overall, it was just an overall very enjoyable experience, partially because of the geography but also because of the way the program is run and the people that I met there.”