Young Harris College Head Coach Mark McKeever knows that having his players compete in the PDL during the summer months is important for the success of a fall college campaign, and that is because he is also the Head Coach of PDL side Mississippi Brilla FC.

McKeever, named Brilla FC Head Coach ahead of the 2015 PDL season, has enjoyed a huge amount of success at Young Harris College, guiding the program to a 128-50-10 record in his time there. A majority of those wins have been earned since 2011, as the team has secured a remarkable 76-17-4 record in the past five years. In that time, especially in recent seasons, many of his team’s best players took part and excelled in the PDL.

Young Harris College talent Lewis Hilton finished fourth in the 2015 PDL Top Prospects list, and the midfielder has scored three goals and provided three assists in 22 games for the USL’s Charlotte Independence in 2016. Defender Macauley King, a rising sophomore at Young Harris, finished the 2016 PDL season ranked 13th in the PDL Top Prospects list and is expected to be a big part of McKeever’s plans this fall.

“We put a huge priority on our players playing PDL in the summer, just for the balance of the professional lifestyle,” McKeever said. “Obviously, with the college game, it can be very short and very intense in the fall and then less intense in the spring with a lot of focus on strength and conditioning, mobility, the physical aspects of the game, but the intensity of the games in the spring is just not there, so the match fitness goes away. The opportunity for the players to go and get 10 to 12 games in the PDL at a very, very high level is absolutely huge.

“We’re trying to get players to the next level – players who are capable of it,” McKeever added. “So those players playing in that environment is huge for their balance and lifestyle.” 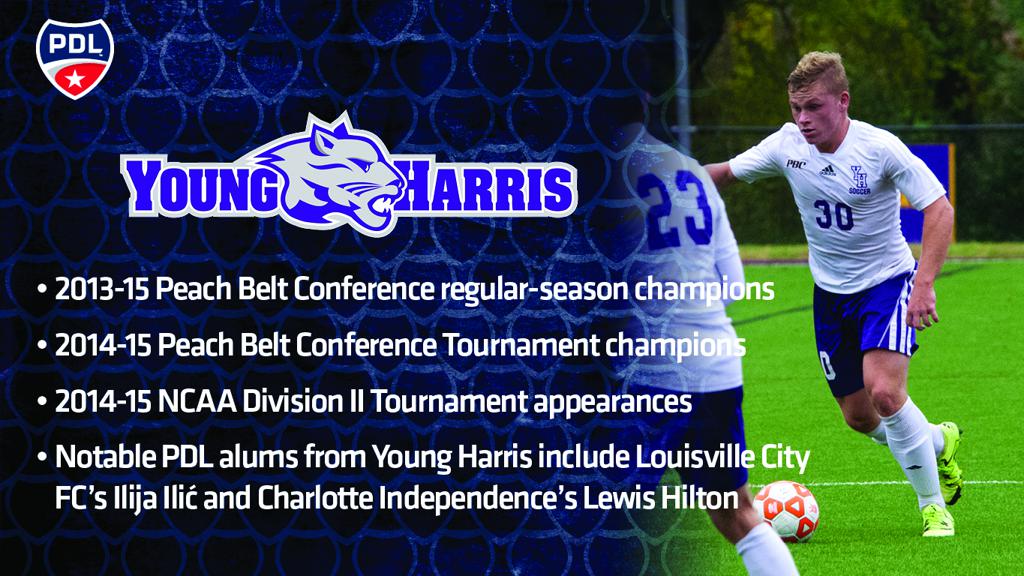 A part of McKeever’s plan was to have some of his top performers playing together during the 2016 PDL season, and he was able to accomplish that by having King, Marco Micaletto and Jonathan Denton all compete for the Charlotte Eagles during the 2016 PDL regular season.

King, who scored one goal and provided one assist in 12 regular-season matches, led the Eagles to nine shutouts. Micaletto, a rising sophomore at Young Harris College, was a key attacker for the Eagles, scoring five goals and providing four assists in 13 games.

“The kid [King] has a lot of talent – huge expectations for him,” McKeever said. “I think he has the core potential; there’s no shadow of a doubt. Both Marco and Macauley, they have huge potential to step up to the next level, but there’s still aspects of their game that need development. There’s aspects of their character that need development as well. They’re not there just yet, but as they go through the process here at Young Harris College, I feel very, very comfortable that they are two that could make an impact at the next level.”

Young Harris College kicks off its 2016 season against Saint Leo at 7 p.m. ET on Friday. Along with King, Micaletto and Denton, PDL players Sam Choi, Carl Brannstrom, Ramin Varnhorn and Anton Viden are all set to take part in Young Harris’ next campaign. Success and a third consecutive NCAA Division II Tournament berth is once again the aim for McKeever and the program, but so too is having players fulfill their potential.

“We’re constantly trying to focus on the professional lifestyle with our players, and we want to give the opportunities for our players to get the exposure to get to the next level. So, a huge focus on what we are trying to do here is to get kids to live like professionals, to give them the best chance to be a professional,” McKeever said.

“Within the program, there are certain aspects of development that we focus on. The three main aspects would be: 1. Awareness 2. Choices 3. Speed of play. Obviously, all of these aspects are connected – if you have a good awareness then usually you’ll make better choices. And if you’re making better choices, then the speed of your game is a little bit quicker. We try to train at the highest level of intensity, so it gives the kids the opportunity to reach their potential. That’s a philosophy here – is to have all of players reach potential.”