Georgetown University Head Coach Brian Wiese is eager to see how many of his players return to campus in good form and high spirits from the 2016 PDL season.

Now entering his 11th season in charge of the Hoyas, Wiese has turned the men’s soccer program into a college powerhouse. Many of his best performers in recent years have competed in the PDL, including MLS rookies Keegan Rosenberry, Brandon Allen and Alex Muyl.

“We’re thrilled for [Rosenberry] and all of our guys who moved on into the MLS ranks,” Wiese said. “Keegan is a really good example of when things work right in the system, and for what I mean in a system, it’s how all of the pieces of U.S. soccer fit together – where you have a high school system, a club system, a developmental academy system all hopefully working together up into the college ranks.

“Keegan is a great example of someone that really progressed well through his college years to a point where he was as professional of a player as you’re going to get before he became a professional. That meant, he was training really well with us. Whenever school was in session here, he was playing, and whenever school wasn’t in session in the summers, he was really with Reading [United AC] in a very professional environment.” 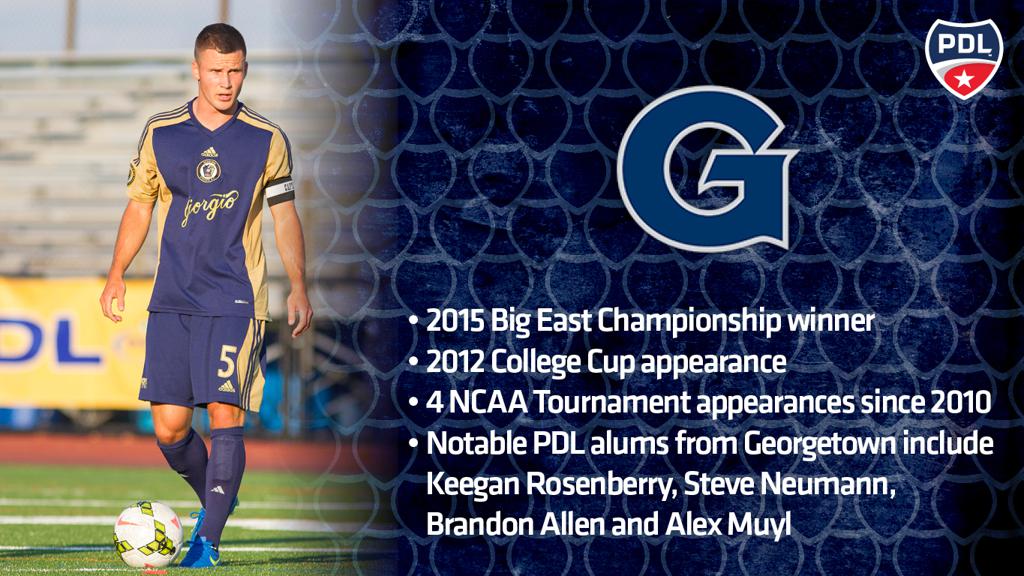 This year is no different. The Hoyas had nine players compete in the 2016 PDL regular season, including PDL Top Prospect Arun Basuljevic and United States Under-20 Men’s National Team goalkeeper JT Marcinkowski. Christopher Lema, Kyle Zajec, Ethan Lochner, Edson Martinez, Brett Campbell, Patrick Koscher and Ifunanyachi Achara are the other seven players to represent the Hoyas during the season.

“When they go to these environments, I think one of the things that can’t be undervalued is … they’re good environments to play in with other very high-level players,” Wiese said. “They’re playing with other players who are very serious about what they are doing for preparation, but it puts them in a different environment for that window.

“In JT’s case, he’s got Burlingame [Dragons FC] playing with different players. When he’s in with the U-20s, that’s a whole different kettle of fish. These are great experiences that they are still able to build on. They’re not stagnant during the summer.

“With Arun’s situation playing with the Red Bulls [U23], he’s playing maybe some of his best soccer right now over the summer, and I think he’s just a confident kid. He’s in a setting, and I think he recognizes he’s doing really well. He’s coming into preseason with a full steam of confidence in his game.”

The PDL campaign is to thank for Basuljevic's form, Wiese says, as the dynamic midfielder scored eight goals and provided five assists in eight games. He was also named to the 2016 All-Eastern Conference Team.

“The big argument against college soccer developmentally is: you don’t play enough,” Wiese said. “If you actually go through, a college player does. They play as much as a pro does. The beginning of August, they're playing six days a week through into early December break, which they need at that time. Then they come back in mid-January, and their playing five-to-six days a week starting mid-January. Their working through May, and they go straight to the PDL. A lot of the PDL teams, their frequency of training and games is no different. They really get a week-or-two break before they’re right back at it in August.

“The PDL piece in how it fits in with college soccer, I think, from our point of view and from a developmental point of view for the rest of the country is vital as any other piece out there for the continued development of all of the individuals out there.”