PDL Sides Gear Up for Open Cup’s First Round 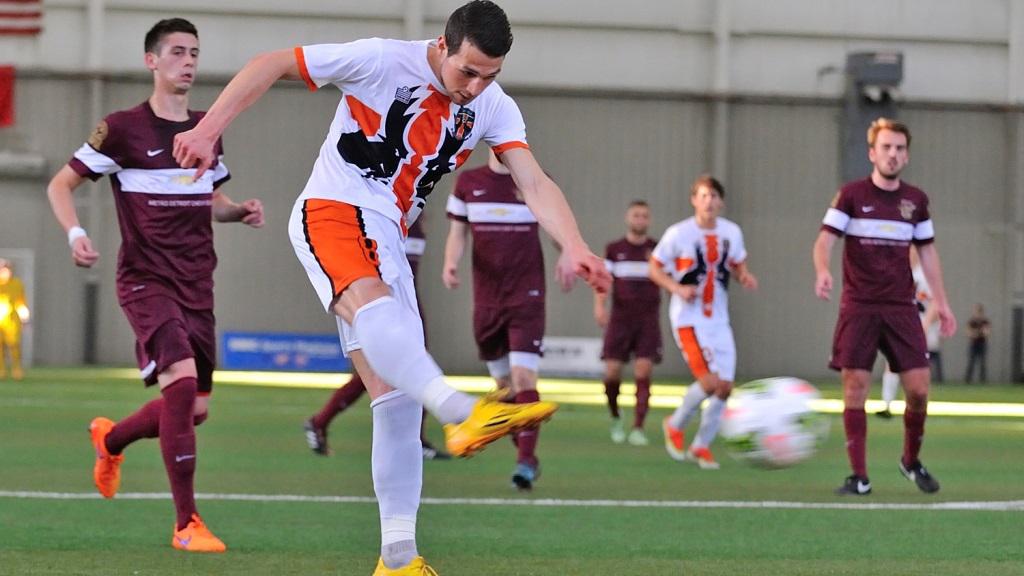 A total of 20 PDL sides are involved in the tournament as the Kitsap Pumas – the top points-percentage team in the PDL in 2015 – were awarded a bye to the Second Round to host the winner of either the PDL’s Sounders FC U-23 or the USASA’s Outbreak FC. The bye stemmed from U.S. Soccer ruling that the United Soccer League’s Rio Grande Valley FC – a hybrid affiliate of Major League Soccer’s Houston Dynamo – was not eligible.

San Francisco City FC qualified for the tournament before it became a member of the PDL this season. San Francisco hosts CD Aguiluchos USA on Wednesday.

This marks the 103rd year of the competition and features a tiered-bracket and single-game knockout format. The winners will advance to the Second Round on Wednesday, May 18, when the USL teams and the PDL’s Pumas join the field.

Clarkstown SC Eagles (NPSL) vs. Jersey Express (PDL), 7 p.m. ET, Torne Valley Sports Complex in Hillburn, N.Y.: Jersey Express enjoyed a good 2015 run in the Open Cup that featured a 1-0 victory against the USL’s New York Red Bulls II in the Second Round. The Express fell in Round 3 to the New York Cosmos. This year is Jersey’s third consecutive appearance in the tournament.

Charlotte Eagles (PDL) vs. Myrtle Beach Mutiny (NPSL), 7 p.m. ET, Charlotte Christian School in Charlotte, N.C.: The Eagles return to the Open Cup after not playing in the 2015 tournament. This is also their first as a PDL side. Charlotte made 11 consecutive appearances from 2004-14 when it was part of the USL. The club’s best run was an appearance in the 2012 quarterfinals that included a 2-0 victory against MLS’s FC Dallas in the Third Round and a 2-1 overtime win against the San Antonio Scorpions in the Fourth Round. (WATCH LIVE)

Reading United AC (PDL) vs. Atlanta Silverbacks Reserves (NPSL), 7 p.m. ET, John Gurski Stadium in West Lawn, Pa.: Reading is competing in its eighth consecutive U.S. Open Cup. The club advanced to the Second Round in 2015 after opening with a 1-0 win against Maryland Bays, but then fell to the USL’s Harrisburg City Islanders 3-0. (WATCH LIVE)

Long Island Rough Riders (PDL) vs. Lansdowne Bhoys FC (USASA), 7:30 p.m. ET, St. Anthony’s H.S. in South Huntington, N.Y.: The Rough Riders look forward to their fifth Open Cup since joining the PDL in 2007. They posted a 3-1 win against the Brooklyn Italians to open the 2015 tournament and then dropped a 1-0 decision to the USL’s Real Monarchs SLC in the Second Round.

New York Pancyprian-Freedoms (USASA) vs. New York Red Bulls U-23 (PDL), 7:30 p.m. ET, Belson Stadium in Jamaica, N.Y.: Before joining the PDL in 2015 and posting an impressive run to compete for the PDL Championship against eventual winner K-W United FC, the Red Bulls U-23s had been a part of the Open Cup in two other instances. The competed in the 2013 and 2014 editions of the tournament and advanced to the Second Round in 2014.

Michigan Bucks (PDL) vs. Detroit City FC (NPSL), 7:30 p.m. ET, Oakland University in Rochester, Mich.: The Bucks own the distinction as the first amateur side to eliminate an MLS team in the tournament, defeating the New England Revolution 1-0 during the 2000 U.S. Open Cup. They also ousted the Chicago Fire 3-2 during the 2012 tournament. In total, Michigan has defeated professional clubs nine times in its 12 Open Cup tournament appearances. During last year’s tournament, the Bucks advanced to the Second Round but then fell to the USL’s Portland Timbers 2 by a 2-0 margin. (USSoccer.com: Detroit Clash Highlights U.S. Open Cup First Round)

Southie FC (USASA) vs. Seacoast United Phantoms (PDL), 8 p.m. ET, Harry Della Russo Stadium in Rever, Mass.: Seacoast salvaged a tough situation in the First Round of the 2015 Open Cup, falling behind and then playing down a man against GPS Massachusetts, only to rally with back-to-back goals in the final 20 minutes for a 2-1 win. The Phantoms bowed out of the tournament with a 1-0 loss to the USL’s Tulsa Roughnecks FC, but overall they left a lasting impression in their first tournament after an eight-year drought.

AFC Cleveland (NPSL) vs. GPS Portland Phoenix (PDL), 8 p.m. ET, Deering H.S. in Portland, Maine: GPS is headed to its third Open Cup in four years. The club missed out on the 2015 tournament. Its most successful stint was in 2013 when Portland defeated Mass Premier 2-0 in the First Round that included a shorthanded goal in the final minute.

CENTRAL TIME ZONE MATCHES:
Mississippi Brilla (PDL) vs. CD Motagua of New Orleans (USASA), 7 p.m. CT, Traceway Park in Clinton, Miss.: Mississippi qualified for its third Open Cup and first since 2012. The club also participated in the 2009 tournament but has yet to advance past the First Round. (WATCH LIVE)

FC Wichita (NPSL) vs. Des Moines Menace (PDL), 7:05 p.m. CT, Stryker Soccer Complex in Wichita, Kan.: The Menace have been a regular fixture in the Open Cup as this year’s tournament marks their 10th appearance. In 2015, Des Moines topped the Madison Fire 2-1 in the First Round, then took the USL’s Saint Louis FC to extra time, only to fall on the road 2-1. (WATCH LIVE)

MOUNTAIN TIME ZONE MATCHES:
Albuquerque Sol FC (PDL) vs. Harpo’s FC (USSSA), 6:30 p.m. MT, St. Puis X H.S. in Albuquerque, N.M.: The 2016 U.S. Open Cup is the Sol’s first appearance in the tournament, while it faces a Harpo’s side that is headed to its second straight Open Cup. (WATCH LIVE)

ARIZONA TIME ZONE MATCH:
FC Tucson (PDL) vs. San Nicolas FC (USASA), 7:30 p.m. AT, Kino North Stadium in Tucson, Ariz.: Tucson is competing in its third Open Cup in four years and looks to play a more complete First Round game compared to 2015. FC Tucson was on its way to a 1-0 victory against Chulsa Fusta FC, only to give up an equalizer in the final 10 minutes of regulation and then one more in overtime for a 2-1 loss.

PACIFIC TIME ZONE MATCHES:
Sacramento Gold (NPSL) vs. Burlingame Dragons FC (PDL), 7 p.m. PT, Capital Christian in Sacramento, Calif.: The Dragons made their Open Cup debut last year but fell 2-1 in overtime to the Sonoma County Sol in the First Round. It was a match that Burlingame was within inches of winning, but the club allowed a stoppage-time equalizer and then another tally seven minutes into overtime.

San Francisco City FC (US Club Soccer) vs. CD Aguiluchos USA (NPSL), 7 p.m. PT, Beach Chalet #4 in San Francisco, Calif.: San Francisco, a new member of the PDL this season, qualified for this stage of the tournament before joining the league. This is their second appearance in the Open Cup. (WATCH LIVE)

Ventura County Fusion (PDL) vs. L.A. Wolves FC (USASA), 7 p.m. PT, Ventura College Sportsplex in Ventura, Calif.: The Fusion were one of the strongest PDL sides during the 2015 edition of the tournament, advancing to the Third Round after posting a 2-1 victory against the USL’s LA Galaxy II. Ventura County had an early scare last year, playing Cal FC to a 3-3 draw through regulation and overtime in the First Round and then eventually earning a 6-5 win during a shootout.

Sounders FC U-23 (PDL) vs. Outbreak FC (USASA), 7:30 p.m. PT, Panther Stadium in Bonney Lake, Wash.: Seattle preps for its second Open Cup appearance and first since 2013. Sounders FC U-23 defeated Doxa Italia 5-1 that year in the First Round, followed by a 3-0 loss to former USL side the Charlotte Eagles in Round 2.