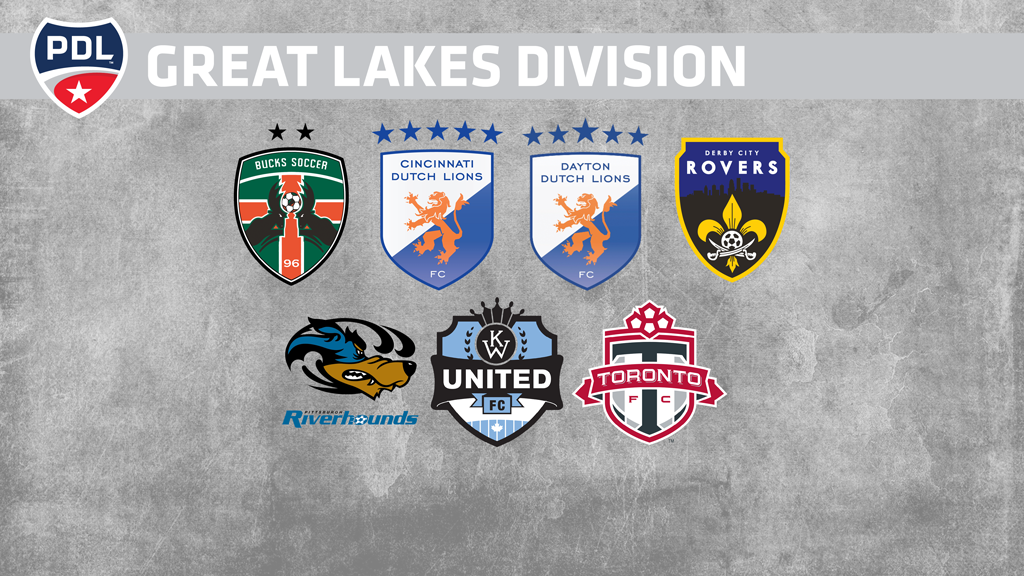 The Great Lakes Division includes every returning club from a season ago, as well as the divisional move by the Cincinnati Dutch Lions, formerly in the South Atlantic. The defending 2015 PDL champion, K-W United FC and defending division champions the Michigan Bucks headline this group.

Great Lakes Division Breakdown:
Cincinnati Dutch Lions: After two seasons in the South Atlantic, Cincinnati joins the Great Lakes for its third campaign. Cincinnati earned its first PDL postseason berth in 2015 after posting an 8-5-1 record and second-place finish. The Dutch Lions bowed out of the postseason with a 3-2 loss to the Charlotte Eagles in a South Atlantic Division qualifier. Significant alumni: Alejandro Garcia (Orlando City B), Kyle Smith (Louisville City FC).

Dayton Dutch Lions: Dayton returned to the PDL a year ago after the organization spent four years in the USL from 2011-14. Dayton was also a 2010 PDL side, so the upcoming year is the club’s third in the league. Dayton finished fifth in the Great Lakes in 2015 with a 3-9-2 record. Significant alumni: Chris Froschauer (Colorado Rapids).

Derby City Rovers: Derby City prepares for its sixth PDL season and looks to rebound from its 2015 showing, when the club posted a 2-9-3 record to finish seventh in the Great Lakes.

K-W United FC: K-W’s rise in the PDL reached a peak moment last season, winning the 2015 PDL Championship. The club, which joined the league in 2011, enjoyed its best campaign a year ago with a second-place finish in the Great Lakes and then a run to the title, defeating the New York Red Bulls U-23 by a 4-3 score in the championship. Along the way, K-W earned some big victories against the Des Moines Menace, fellow Great Lakes side the Michigan Bucks and then host Seattle Sounders FC U-23 in the PDL Championship’s semifinal stage. Significant alumni: Julian Buescher (D.C. United), Nathan Ingham, Ben Polk (Portland Timbers).

Pittsburgh Riverhounds U23: The Riverhounds are set for their third campaign in the PDL. In 2015, the club went 3-9-2 and finished sixth in the Great Lakes Division. During the offseason, the Riverhounds appointed James McCaig as the PDL side’s head coach for 2016.

Who will win the Great Lakes Division?