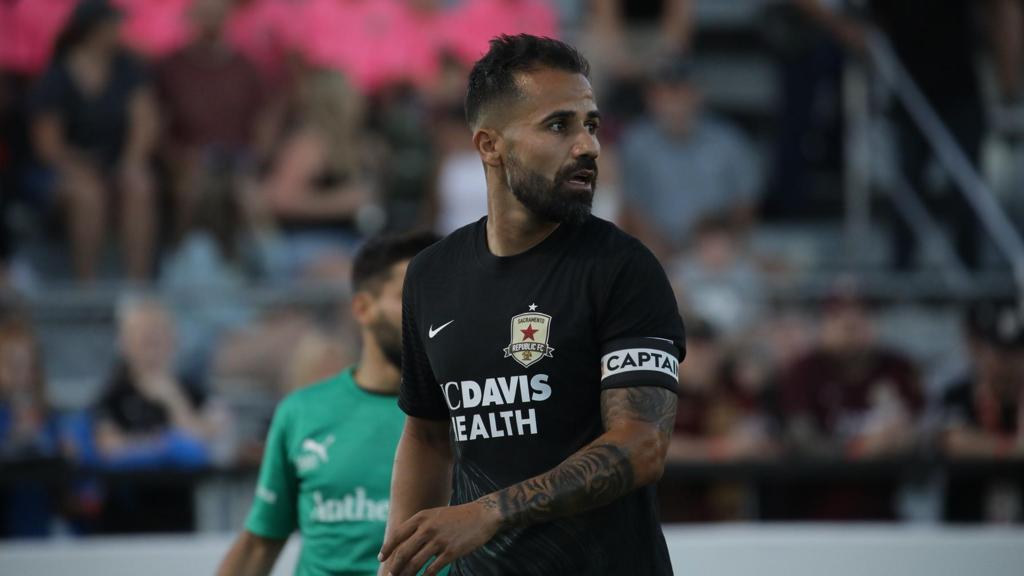 As Ventura County Fusion and Long Island Rough Riders prepare for their Playoff Final matchup on August 6th, they can take inspiration from those that came before them. These are two storied clubs, with long histories that help weave the tale of American soccer. As a result, both clubs have had extremely high level soccer players pass through their systems, growing to bright professional careers elsewhere.

Compare the all-time rosters of these two clubs, put together by the USL League Two staff. If these were the squads headed into the final, who would be taking the trophy home?

One caveat – from 1996 until 2007, Long Island Rough Riders were a professional club. They saw incredible talents walk through their doors, like Gary Ablett – a two-time English league champion with Liverpool FC. For this exercise, we’ve only included players that played for Long Island Rough Riders since their start of pre-professional USL participation in 2007. Both squads have been placed in a wide 4-2-3-1 formation.

GK: Earl Edwards Jr. (2012, 2014) – Edwards is currently playing for New England Revolution II, after making 8 MLS appearances since leaving Ventura County Fusion in 2014. He was named First Team All PAC-12 twice during his time with the UCLA Bruins, complemented by his time in League Two. He gave the Fusion several dependable performances between the sticks.

LB: Daniel Steres (2011-12) – Steres is an MLS lifer. As soon as he departed from League Two, last playing with the Wilmington Hammerheads, he became a permanent fixture in LA Galaxy’s system for the next seven years. Amassing 189 appearances between Los Dos and the Galaxy, Steres is one of the great League Two success stories. In his 21 matches with Ventura County, Steres helped them win the Southwest Division and led them to a Conference Finals appearance.

CB: Brad Rusin (2007) – Rusin is the first retired player on our list, joining Ventura County Fusion just after their 2006 inception. As a professional, most of his appearances came for Carolina Railhawks (now named North Carolina FC) and HB Koge, a club that was caught between the Danish first and second divisions during Rusin’s time there. He was a part of Ventura’s early success, helping lay the foundation that led to deep playoff runs several times in the club’s first six years.

CB: Nick DePuy (2014-15) – DePuy didn’t have to show too much off in Ventura County, but he did anyway. Coming from the Real Colorado academy, the Irvine native needed only five games to prove his worth to professional clubs. Nowadays, DePuy spends time in the LA Galaxy system, with 86 combined appearances between the Galaxy and Los Dos since 2019.

RB: Tony Alfaro (2014) – Alfaro is entering the prime of his career, with 34 appearances for MLS side D.C. United since his arrival in 2021. He’s a consistent squad player that may continue to work himself into their rotation as a staunch defender. Alfaro scored three goals in his lone Ventura County season, helping lead them to another Southwest Division Title.

CDM: Matt LaGrassa (2013-2015) – The run of Ventura County talent between 2009 and 2014 is some of the best for any club in League Two history. LaGrassa is a recently acquired piece (for the second time) for USL Championship’s Sacramento Republic, who are currently on a major tournament run of their own. He’s spent most of his professional career as a player for Nashville SC, and was one of the players to bridge the gap between the USL Championship and MLS squads.

CAM: Rodrigo Lopez (2008-09, 2012) - Lopez is unafraid of the limelight, as the current captain of USL Championship's Sacramento Republic, he's on a long playoff run of his own, helping mow through three different MLS clubs en route to the Lamar Hunt US Open Cup Final. One of Ventura's greatest success stories.

LW: Abu Danladi (2015-16) – Danladi is one of the most efficient scorers in Ventura County history, and professional clubs took notice. Danladi scored six times in just eleven games for the Fusion, before joining Minnesota United for the next three seasons. After trips to Forward Madison and Nashville SC, Danladi has just returned to Minnesota United to recreate some of that early-career production. At only 26 years old, there’s still much in store for the Ghanaian.

RW: Thomaz (2010) – Thomaz grew up in the academies of massive clubs like Sao Paulo, Corinthians, Juventus and Internacional. In 2010, he agreed to a loan move to Ventura County, and lit up League Two. In 13 appearances, he put across six goals from an attacking midfielder position before returning to South America to continue his professional pursuits. He even made his way back to Sao Paulo’s first team in 2017, and appeared 19 times in the next three seasons.

ST: Gyasi Zardes (2011-12) – It couldn’t really have been anyone else, could it have been? Zardes scored 10 times in 12 Ventura County matches, proving his readiness for the next level. Over the next ten years, Zardes put up 241 MLS appearances for LA Galaxy and Columbus Crew, scoring a blistering 54 goals in 110 matches for the latter. He’s earned 67 caps for the United States Men’s National Team, scoring 14 times in international matches, including the semifinal match winner against Qatar in the 2021 CONCACAF Gold Cup. 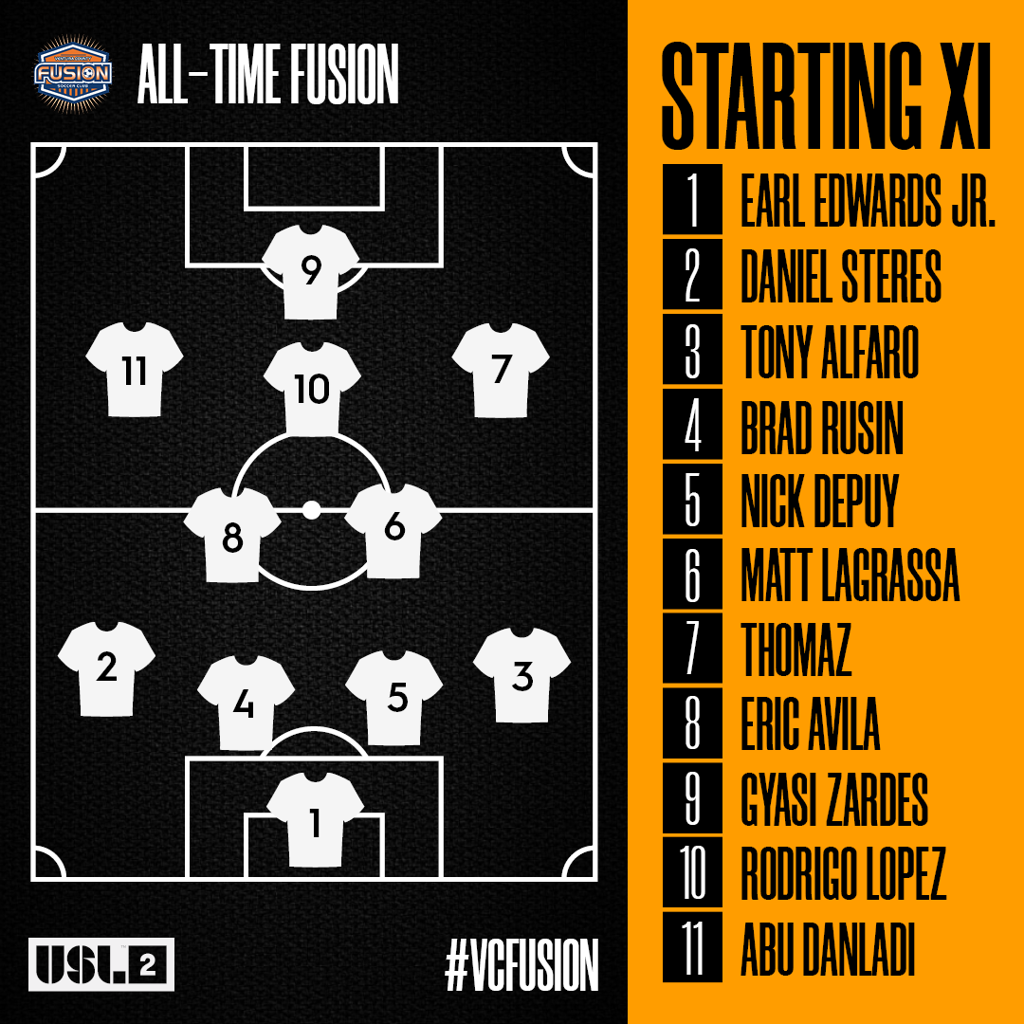 GK: Tim Melia (2007) – With 63 clean sheets in 270 appearances for MLS side Sporting Kansas City, there was really no other choice. He’s been named the MLS Goalkeeper of the Year and Comeback Player of the Year, as well as earning a spot on the MLS Best XI in 2017. The seasoned professional keeper played in Long Island’s first pre-professional season in the 21st century.

LB: Stefan Mueller (2018) – 26-year-old Mueller is rising in the ranks of professional soccer. After a stint with USL League One’s South Georgia Tormenta, he signed earlier this year with Rio Grande Valley Toros in USL Championship. He scored four goals as a member of Tormenta, and has just taken another step to the big time.

CB: Kevin Garcia (2010-13) – One of the greatest defenders in Rough Riders history, Garcia was a constant presence in Long Island. After leaving USL League Two, Garcia played professionally in Sweden and Ireland before returning to the states to compete in USL Championship, where he’s amassed 80 appearances since his return to the States. He also was a member of MLS’s Houston Dynamo, picking up more than 30 appearances between 2016 and 2019.

CB: Steve Jolley (2007) – While many talents in League Two start their careers there, that’s not the only path our talented players take. Jolley played the last year of his playing career in Long Island after a nine-year MLS career that saw him appear more than 200 times for LA Galaxy, FC Dallas and New York Red Bulls. He was a constant fixture in his MLS defenses, and played just as well for a very good Rough Riders squad.

RB: Dylan Nealis (2017-19) – Nealis is only 24, and is a squad player for New York Red Bulls in the MLS. He recently enjoyed stints with Inter Miami CF and Nashville SC before making his leap, and he’s still carving out his role in the American top flight. He’s appeared 19 times for Red Bulls since joining in 2021.

CM: Daniel Bedoya (2017-18) – Bedoya scored 4 goals from the midfield in his 21 Rough Riders appearances, and that earned him a spot with New York City FC. He currently plays for USL League One’s FC Tuscon, where he’s picked up three goals in 27 matches.

CM: Dakota Barnathan (2012-13) – Barnathan is the second League One midfielder that comes from the Rough Riders, as he plays for Richmond Kickers now. After leaving Long Island, he had professional spells with Pittsburgh Riverhounds and FC Tuscon before finding his way to Richmond.

LW: Mike Grella (2007-08) – In the two seasons he was with the Rough Riders, Grella scored 10 goals in just 17 matches. His efforts eventually got him a deal in 2009 with then English League One team Leeds United. He appeared in 29 matches for Leeds between 2009 and 2011, and after that contract was up, signed a deal with Brentford. His longest stint was with New York Red Bulls, where he appeared 73 times, scoring 16 goals from the wing. He retired in 2018.

CAM: Mike Palacio (2007, 2009) – Palacio had two extremely successful Long Island seasons that bookended a short stint with New York Red Bulls. In his 26 USL League Two appearances, Palacio scored eight goals from the midfield. He played professionally in Serbia before coming back to America to finish his career with the club now known as North Carolina FC.

RW: Jared Gilbey (2022) – Gilbey is now an alumnus of Long Island Rough Riders because he’s signed to go play professionally in Denmark after impressing scouts in the 2022 USL League Two season. He was named to the May Team of the Month in the season, racking up assists left and right for an extremely strong Long Island side. He has his whole professional career ahead of him.

ST: Matthew Vowinkel (2022) – Vowinkel is the team’s leading scorer, one of the leading scorers in these playoffs, and one of the most productive forwards in Long Island history. His constant pressure up top has forced a lot of the action that’s put the Rough Riders through. He was taken in the 2019 MLS SuperDraft by FC Cincinnati, and is ready to start his professional future after taking on League Two. 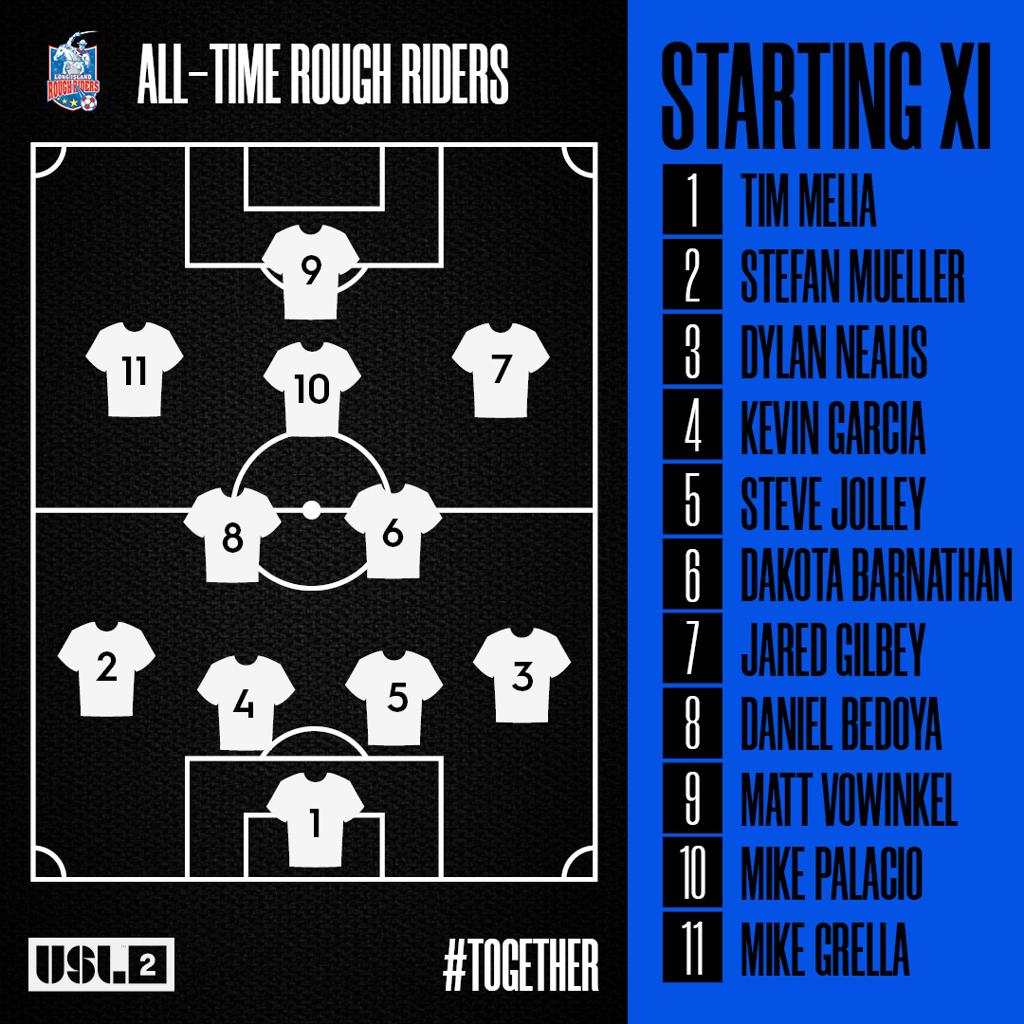