Alexandria, KY (June 30, 2022) - Kings Hammer FC look to finish the season on a high note as the home finale will close out the 2022 USL W League season at the Mustang Athletic Complex. Racing Louisville stands in the way, as they pursue the top spot in the Great Lakes Division and a postseason bid. Racing sits five points back from Indy Eleven, but still could make their way into the postseason. The last outing at the MAC had KHFC take a 2-1 win against Flint City AFC. Kickoff for Thursday night's match is at 7:00pm in Alexandria, Kentucky.

Racing Louisville took the first matchup with a resounding 6-0 win. That match was in the middle of the club's three-match win streak and helped them maintain a top-two spot all season. In the second half of the season, so far, Racing has only notched one win in four matches. If the club continues to aim for a postseason appearance, it will potentially require winning both of their last two matches.

Coming off a win and a draw, Kings Hammer FC will look to finish the home schedule with another positive result. Spoiling a postseason chance is a bonus, but a point or three at the MAC will show the Club's positive trajectory. Summer Denigan tallied two goals in the last match, a win and a Goal of the Week nomination. The club has a lot more to accomplish with three matches remaining.

The next KHFC match is scheduled for Saturday July 9 at Kalamazoo FC. A potential match with Midwest United FC to makeup a previously postponed event may be scheduled after the Kalamazoo match.

Notable players:
Summer Denigan (KHFC) - A clutch performance in the last outing (W 2-1) saw Denigan notch two of her three goals on the season and the Club's first-ever win. Both goals were scored on free kicks, but the first was also a Goal of the Week nominee.

Annie Greene (KHFC) - The Northern Kentucky University forward is second on the team in goals scored (2), tied for third in shots (8), and leads the team in minutes played (675).

Autumn Weeks (RL) - Few players have played as many minutes as Weeks has in the first USLW season. A transfer to the University of Louisville for 2022, Weeks ranks at the top of the League for minutes (860). Averaging 86 minutes played per game, Weeks has added seven shots in her 10 games played.

Kings Hammer FC staff and players thank you for your support during the inaugural 2022 USL W League season and hope to see you next season. Find us on Facebook, Twitter, Instagram, and YouTube to keep updated on everything Kings Hammer FC. Contact the the Club for any questions or appearances. 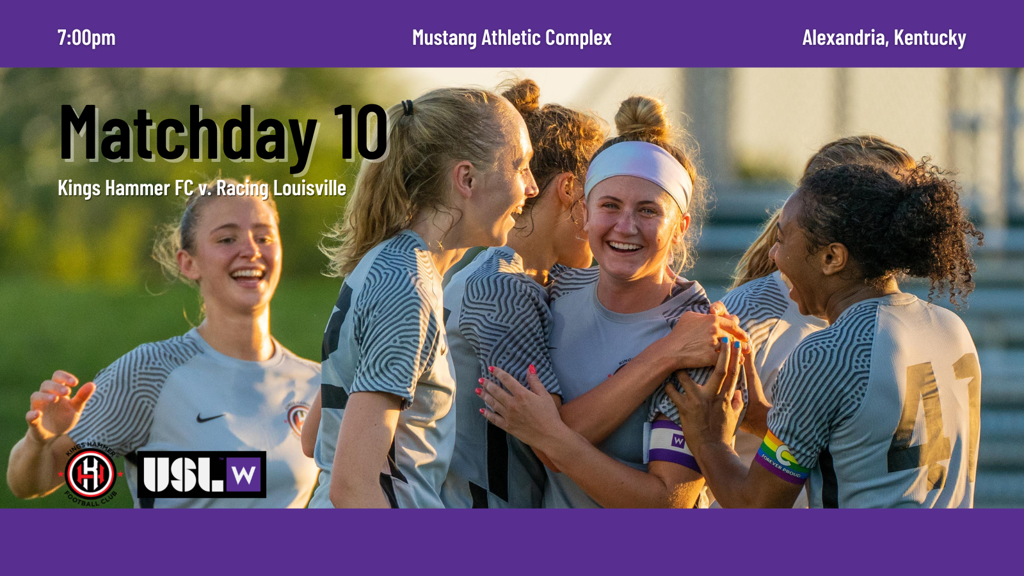