Covington, KY (June 7, 2022) - The first week of June was a busy week for Kings Hammer FC. Three away trips, with all being over three hours away each trip, is how the Club opened up the month. While the first trip was not as pleasant, the weekend trips helped turn things around for KHFC.

The first matchup between the clubs in USLW started off hot for Flint, as they scored in the 3'. Kings Hammer was able to keep Flint off the scoreboard again, but a late first half goal in the 45' doubled the home team's lead and set KHFC in a bigger hole at 0-2 at half.

A few changes at halftime helped, but two quick goals in five minutes (74' and 79') put Flint up for good and an 0-4 scoreline ended up being final. Flint really brought out a high-powered attack in the match, which tallied 19 shots. Kings Hammer were only able to muster eight shots, three of which from team-leader Jordyn Rhodes. Not much time to dwell on the result, as another trip to Michigan was set for a few days later.

Two clubs right with each other in the Valley Division table and hours from each other on I-75 was the scene for a Saturday afternoon USL2 match in Toledo. The match also marked the first of three between the two for the season, and the first of two away trips to Toledo within 10 days of each other.

It was Toledo who would strike first, against the run of play, when they went up 0-1 in the 13'. Kings Hammer were doing everything they could to equalize and even take the lead, but their shots were blocked by a compact Toledo defensive unit. Toledo held strong and went into the half up 0-1.

The match looked as if Toledo's defending would pay off, until the 66' when Kyle Healy placed a perfect ball to Mikkel Gøling, to equalize and give each other their first assist and goal of the season. Shortly following the equalizer, a throw-in from Ethan Garvey landed on the head of Marcello Jones and found its way into the back post to put KHFC up 2-1. The match continued to be all KHFC and final whistle blew to break the longest winless streak the Club's had in its two years (two matches).

A busy week and weekend of matches for the Kings Hammer players made for an interesting situation for the second USLW match in four days. Eight new players made the trip to historic Keyworth Stadium for the first and only match between the two clubs this season. Of the eight new players, seven made their debut and four were starting.

It was a debutant-to-debutant connection in the 11' when Kenzie Schneeman put a crafty outside-of-the-right-foot flick to Olga Massombo who just lifted the ball enough to beat the Detroit goalkeeper for a 1-0 KHFC lead. This would mark the first lead in the Club's USLW history. Just a few six minutes later, KHFC would end up doubling their lead off a worldie from Annie Greene, who took Lilly Yordy's throw-in, battled off a defender, and sent a curling shot to the back post that just tucked inside for the 2-0 lead. The remainder of the first half saw little action from either team's attack at goal, and would go into the changing rooms at half 2-0 for KHFC.

A strong Detroit team was bound to keep their rowdy home crowd on their feet, singing, dancing, and drumming away. A 70' goal that took an unfortunate misdirection off a KHFC defender found its way to a Detroit attacker to cut the lead to 2-1. The hosts kept pushing forward and seemingly equalized in the 78', but flag was raised for offside and took the goal off the scoreboard. Late game heroics and phantom whistles plagued the last 10+ minutes of the match, as Detroit rang the crossbar in the 89' to keep the crowd entertained. Then, with the last quick of the game coming from a corner kick, Detroit was able to redirect a header to the backpost to equalize 2-2 in 90+5.

Kings Hammer FC staff and players thank you for your support during the 2022 USL League Two and W League seasons and hope to see you throughout the season. Find us on Facebook, Twitter, Instagram, and YouTube to keep updated on everything Kings Hammer FC. Contact the the Club for any questions or appearances. 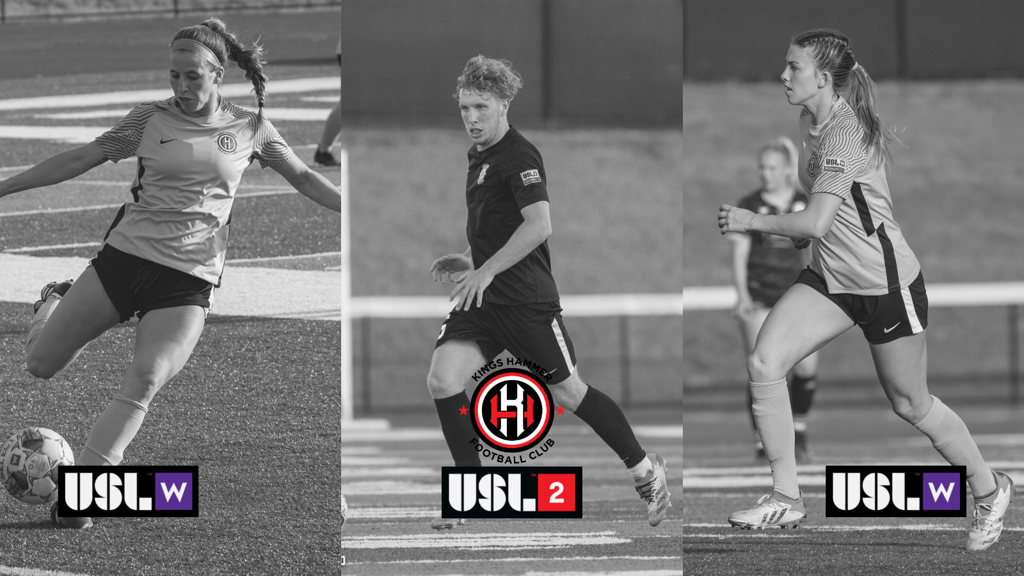