Weekend Roundup: The Matches You May Have Missed 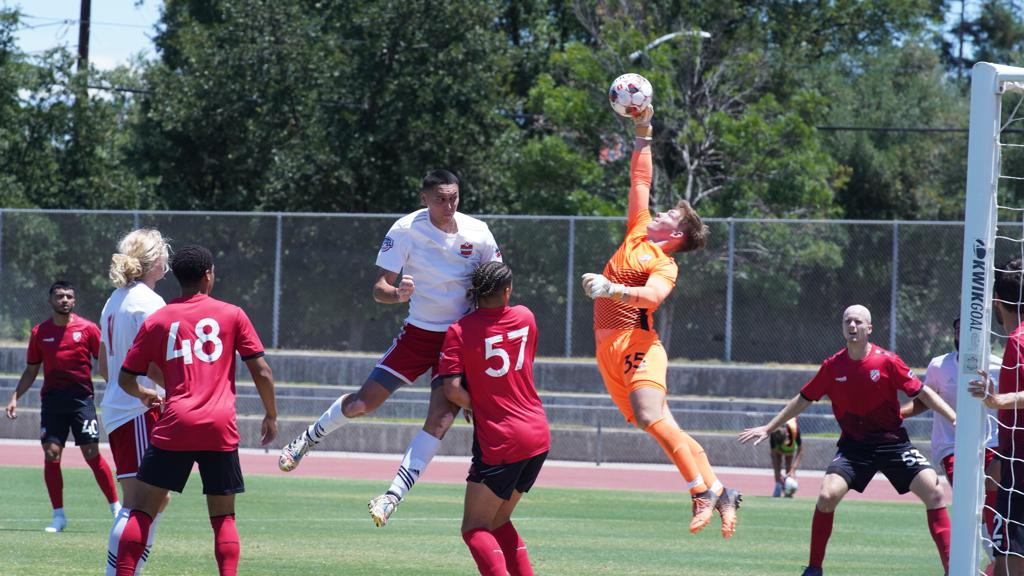 Thrilling comeback wins and an intense matchup between decades-long rivalries marked just a few of the USL League Two games that took place last weekend. From diving headers to crossbar saves, the weekend was full of excellent League Two action.

The Seahorses pulled out a gripping comeback win against a young Project 51O team on Sunday evening after going into an early 2-0 hole. A high-flying header from Luis Saldana assisted by a cross from Beau Leroux put 51O up within the first minute of the game.

Four minutes later, Saldana had another opportunity after the ball was flicked on to him while running to the top of the box. SoCal’s keeper Alexandre Durand decided to come off his line but made a late challenge on the ball, tripping Saldana in the box and earning a yellow card. Gabriel Bracken Serra took the penalty and gave the team their second goal of the game.

The Seahorses got back in the game before the half with a goal from Jesus Vargas. They were unable to convert from a set piece, but maintained possession in their attacking third. Vargas redirected a long cross sent in for an easy finish at the center of the 6-yard box.

Despite multiple yellow cards in the second half, SoCal stayed aggressive to earn the tying goal by a header from Luan Barbosa in a similar fashion to 51O’s first. Osvaldo Santana delivered the service to Barbosa’s perfectly timed run into the box and his height gave him the advantage in the air over 51O’s back line.

SoCal put the dagger in their comeback with a goal in the 88th minute of the game. After stringing together a couple of passes in the densely-packed penalty area, Zach Rivas got the last touch with the outside of his foot to send the ball past the keeper into the net.

Mississippi Brilla also completed a comeback win on Saturday night after conceding an early goal from LA Krewe. Striker Quesi Weston earned a through ball past Mississippi’s back line and slotted the ball on the ground past the keeper for their lone goal of the game in the sixth minute.

Krewe’s lead did not last long, as Brilla tied it up a few minutes later with a penalty kick from Jamie DiLuzio, who finished the game with a brace. His second goal came later in the first half after Peyton Voelker sent in a low cross from the edge of the box. Krewe’s keeper Sami Borchalli made a tough save, but pushed the ball right to DiLuzio’s feet for an easy finish.

Brilla’s third goal of the match came from another ball over the top of the back line. Voelker used his speed to get past his marker and after noticing the keeper came off his line, he took a touch past and followed up into the goal.

Brilla maintained their momentum in the second half and earned their final goal from Miguel Fernandez in the 79th minute. Again, with the keeper coming out, Fernandez takes a touch and finishes off a tough angle for their fourth goal of the night. Brilla’s keeper Chris Morrish came up with a couple of impressive saves to preserve the win.

The scoreline from this game fails to reflect the competition and opportunities that were present on Saturday evening between these long-time rivals. A first half brace from Matt Myers earned the win for the Nor’Easters and the edge in the oldest rivalry record in League Two history (23-22-8).

Ocean City started off the game strong and found the ball in the net in the eighth minute, but the call was overturned for offside. They kept their foot on the gas and got the first official goal of the game one minute later. Myers, with four defenders around him and his back to the goal, spun around and shot off balance into the top right corner.

The Nor’Easters had a few more chances to extend their lead, including a penalty kick that was hit off the crossbar and a free kick where the ball found its way under the wall but was saved by REA’s keeper. They finally earned the second goal off of Myers’ diving header in the 24th minute.

Reading United had multiple good looks in the second half, but between hitting the post and clutch saves from OC’s keeper Felix Schäfer, they were unable to put any away.

Read our Matches to Watch to get ready for the next week of games!