Team of the Month: May 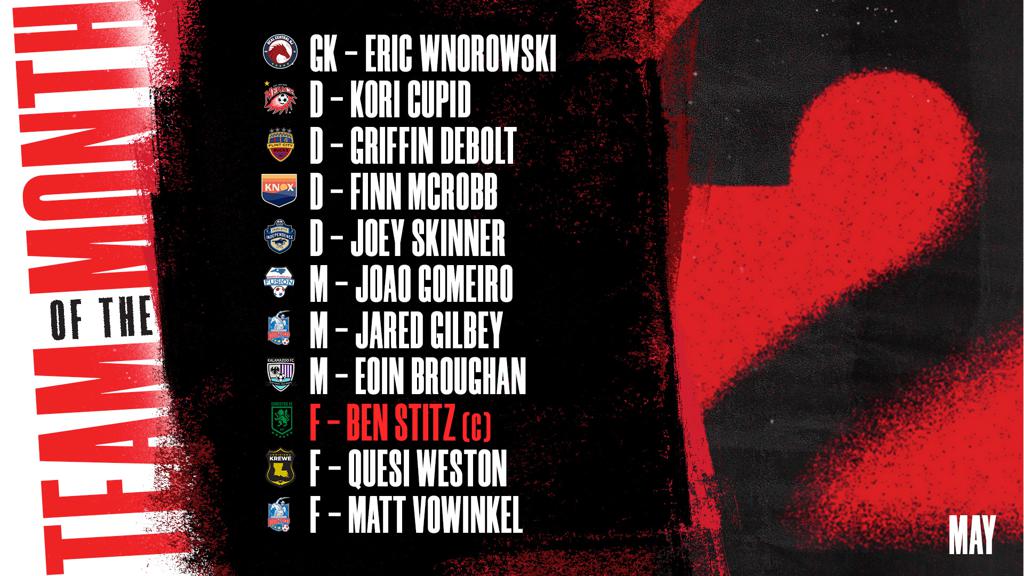 The very best from the first month of League Two

League Two is off to a blistering start, and these superstars have wasted no time hitting their stride. 10 clubs represented across 11 Team of the Month spots, and there's no shortage of talent being showcased right now.

This list was made in conjunction with USL HQ's Sporting department and scouting network.

Real Central NJ have had one of the most difficult schedules to start the season, playing Ocean City Nor'Easters, West Chester United and Reading United in the space of just a week. in the 135 minutes Real Central NJ has played without Wnorowski, they've conceded four goals. In the 225 they've played with him, they've conceded one, and he's stopped 18 attempts at his net, helping to preserve five league points in the month of May.

Cupid has been more prolific in attack than some of the forwards in League Two, scoring a brace in a critical match against Peoria City for the Deep North Division lead, and added an assist in a then-nervy win over St. Croix SC. The Menace are back, and Cupid's a huge part of their return.

Griffin DeBolt and Hugo Bacharach have been massive at the back for Flint City Bucks. With Debolt on the pitch, Flint City's only conceded one goal, and that was to Kalamazoo FC, one of the best teams in League Two. Flint City has left last year's shaky start long behind them, and while they are putting goals across, this return to form has come on the back of their defense.

Finn McRobb is one of the many that have banded together for One Knoxville SC's inaugural League Two season, and he's one of the biggest reasons they're off to a flying start. McRobb scored a critical goal in the club's 3-2 win over South Georgia Tormenta FC 2, and was able to help maintain a clean sheet against a very good Tri-Cities Otters team. With McRobb contributing from the back, the sky's the limit in Tennessee.

In the two games Joey Skinner played for Charlotte Independence II in May, the club only allowed one goal and he peppered the opposing half in the 5-1 win over Tobacco Road FC, getting three shots out at their opponents.

There have been few more prolific scorers in League Two than Joao Gomeiro, and pretty much all of them are also on this list. NC Fusion U-23's number 10 put four goals past Tobacco Road FC and the 80th minute equalizer in their 2-1 win over North Carolina FC U-23. It's impossible to talk about the month of May without talking about Gomeiro.

Gilbey may wear the number 8 shirt, but he passes like a pure 10. In the span of five days - in two games against Hudson Valley Hammers and Cedar Stars Rush - Gilbey compiled two consecutive games with a hat trick of assists, totaling six goal contributions in less than a week. Long Island Rough Riders are on fire, and their maestro in the middle may be the biggest reason why.

We couldn't have this list without giving our CDM's some love. Eoin Broughan caused problems defensively for two very good opponents in Flint City Bucks and AFC Ann Arbor, helping Kalamazoo total four league points out of those two critical matches. They'll be looking for him to continue patrolling the middle to maintain their form as a team.

Ben Stitz captains this team because of the week-in, week-out dominance he's provided for Christos FC. He had only one game of his four in May without a goal contribution, totaling three goals and four assists in the month. Christos have yet to score fewer than three goals in any match they've played, and Stitz is one of the biggest reasons why. He's on fire right now.

The start to LA Krewe's season has been a mixed bag of results, but there's been no question that Quesi Weston will be a massive part of whatever they do this season. He has yet to have a scoreless game, putting up five goals and two assists in three matches in May, including a 2-goal, 2-assist performance in a 9-2 dismantling of cross state rivals LA Parish AC.

And yet, despite excellent performances from all across the league, nobody put more goals across the line in May than Matt Vowinkel. Two hat tricks in May - one against Morris Elite SC, and another against Cedar Stars Rush, giving him six goals in the first month of the season. Long Island Rough Riders may be the best team in the league right now, and they don't get there without Vowinkel's clinical ability in front of goal.