Friday Night at the MAC

Alexandria, KY (May 19, 2022) - Kings Hammer FC get to play hosts to the first-ever Cleveland Force SC USL League Two match. While the two saw each other in action in 2021, that was in USL Academy play, the newly formed in 2022 Valley Division of USL League Two brings the two opponents back together. Friday night's match at Mustang Athletic Complex will be the Force debut, and all the action will be at the MAC for a 7:00pm kickoff.

KHFC will look to continue building off Sunday's away victory over Fort Wayne. Additionally, a rebound home win would be nice for KHFC and send them to first in the Division, although very early on. A lot to play for in the match, as this will be the first of three matches between the two during the 2022 season. Fortunately for KHFC, two of the three matches will be played at Bishop Brossart instead of the trip to Cleveland.

Notable players:
Sam Robinson (KHFC) - The second-year KHFC forward has started the 2022 campaign strong, while only tallying one goal, Robinson also drew a penalty, and leads the team in shots and chances created. One of four KHFC players to play all 180 minutes in the season thus far.

Marcello Jones (KHFC) - Tied with Robinson to lead the team in goals (1). Jones calmly converted a penalty in the 2-1 win over Fort Wayne. Also tied with two others for second in the team in shots (2).

Cleveland Force SC - This will be the debut match for the newest club in the USL League Two Valley Division. A foe of KHFC from 2021's USL Academy season, Force look to make an impression in their first USL2 match ever.

Kings Hammer FC staff and players thank you for your support during the 2022 USL League Two season and hope to see you throughout the season. Find us on Facebook, Twitter, Instagram, and YouTube to keep updated on everything Kings Hammer FC. Contact the the Club for any questions or appearances. 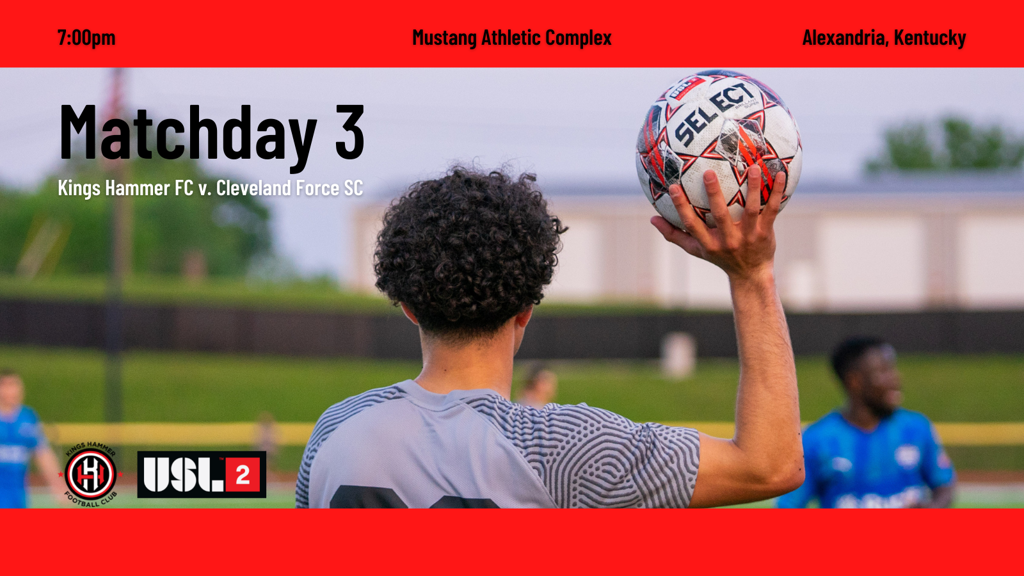