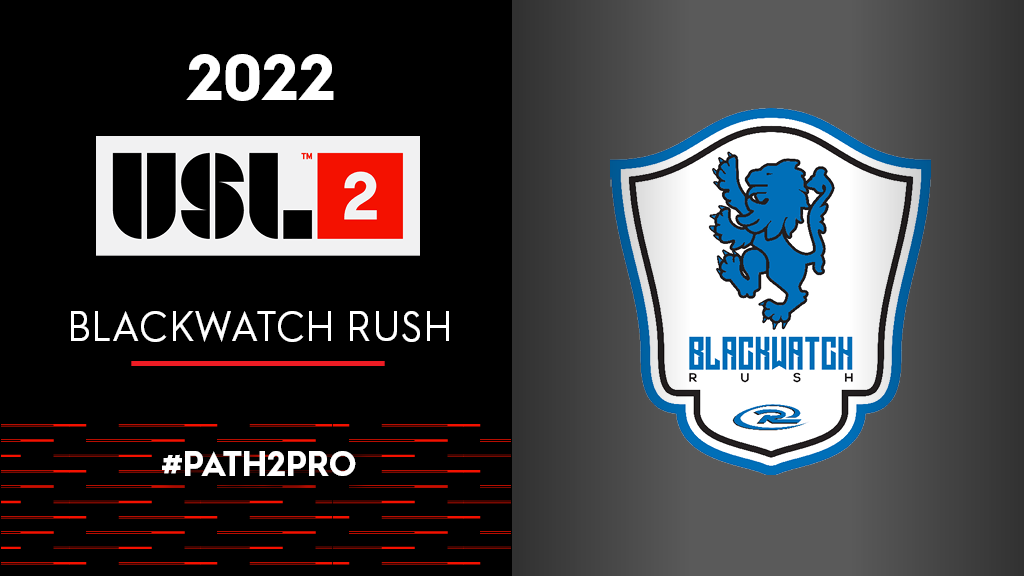 "We are incredibly excited to bring a USL League Two team to the Capital District,” said Brian Gordon, New York Rush General Manager. “As a club, our goal is to offer the best platforms and pathways to our players and this is reflected in our commitment to being part of this quality league. We have a qualified and enthusiastic staff who are intent on providing a pathway for our youth players as they progress into adult soccer."

Blackwatch Rush was founded in 2021 after the merger of two successful New York soccer brands. Founded in 1996, the historic Blackwatch Premier teamed up with the renowned New York Rush to create a dynamic soccer program to serve athletes across the Capital region of New York, providing new soccer pathways to players within the region. With programs in Albany, Syracuse, Rochester, and Buffalo, New York Rush has helped over 250 players compete collegiately while Blackwatch Premier established a historic soccer presence known for its success and progressive approach to the game. The newly founded organization combines the long-standing history of Blackwatch Premier with the on-field success of New York Rush to bring a new chapter of soccer development to Albany and its surrounding areas.

“Re-entering the USL League Two platform is an exciting time for our elite amateur players in our market as well as the region as a whole,” said Steve Freeman, Northeast Rush Academy Director. “The level and standard of play within the USL League Two will be a great opportunity for our players to grow and compete at a regional and national level. Having been fortunate to have had experience coaching in the PDL, now USL League Two, I am extremely excited to lead our efforts at Blackwatch Rush going forward as the head coach. It is a privilege and honor to work with potential future professional players.”

The New York-based club operates on the mission of being a part of a global brand that is committed to providing an unparalleled soccer experience. The club’s player-centered approach, backed with a national-level program and elite-level coaching, provides a positive playing and learning environment that fosters long-term player development and personal growth. Through a progressive, ambitious and comprehensive understanding of the game, Blackwatch Rush hopes to establish growth pathways for its players, coaches and staff to reach the highest levels of their soccer careers.

Through membership in League Two, Blackwatch Rush will be able to continue its mission of player growth by giving its members access to a proven pathway toward a career in professional soccer. The club’s collective membership will also see the benefits of joining League Two as the USL provides pathways for coaches, executives, club staff and communities to continue their growth within the game.

“We are thrilled to welcome Blackwatch Rush to League Two for the 2022 season,” said Joel Nash, Vice President of Youth & Pre-Professional. “The club’s new era speaks to the dedication of its leadership in providing opportunities to the players of the Albany community. Not only will entrance into League Two provide a tried and tested pathway to the pros for Blackwatch Rush players, it will also give players the opportunity to test their skills against the very best competition in the nation. We look forward to watching the club step onto the pitch next season.”