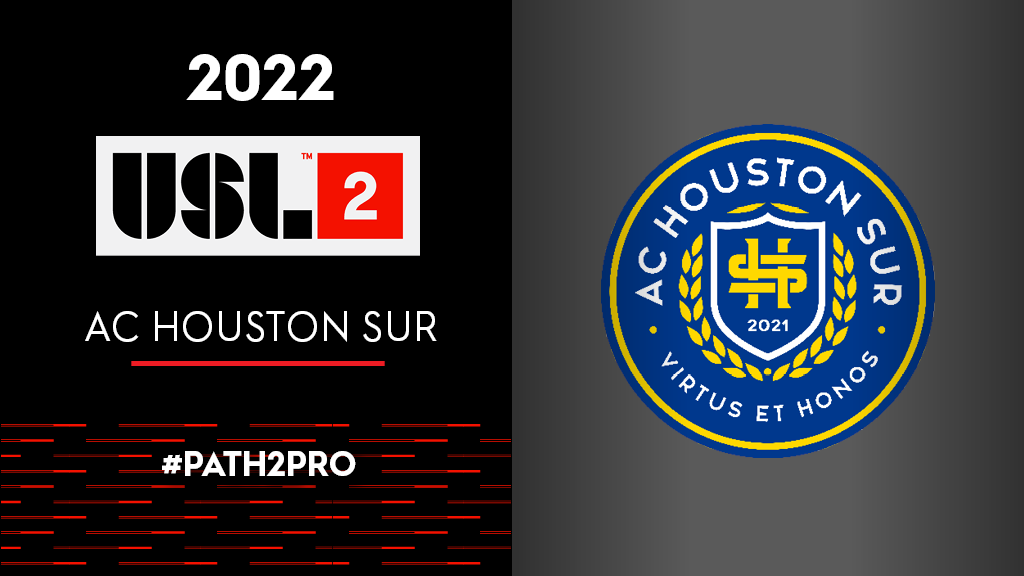 “Houston, as the fourth largest city in the U.S., thrives with an expanding multicultural and integrated social fabric,” said Scot Fraser, President of AC Houston Sur. “At the very core of this is the participation, growth and development of soccer from grassroots participation via club academies to both women’s and men’s professional teams. As president of AC Houston Sur, we are delighted to be the next addition to the growth of the game and development of talent in the greater Pearland community in south Houston. We are proud and delighted to have been recognized by the USL League Two leadership with the confirmation of our membership to the League commencing in March 2022.”

Founded in 2021, AC Houston Sur was established to provide quality soccer programming for elite athletes in the greater Houston community. The Texas-based club prides itself on its holistic player development model and will use its programming to create growth pathways for athletes in and around the Pearland community.

“We are very excited to be launching a new USL League Two team in south Houston, primarily for the residents of Brazoria and Galveston counties,” said Amr Neamatalla, General Manager of AC Houston Sur. “The soccer community in Houston has been keen to see increased attention to young talents with a proper pathway to the pro model and AC Houston Sur was established to do just that.”

AC Houston Sur’s motto of “Virtus et Honos”, a phrase that translates to strength and honor, signifies the value the club places on teaching character excellence both on and off the pitch. In fostering an environment of strength and honor, the club aims to develop its players to their highest potential within the game while providing a platform that enables players to fulfill their own career aspirations.

“Our values as an organization are expressed in our club motto “Virtus et Honos” (Strength and Honor), which expresses our commitment to the code of conduct of players, staff and officials who represent our organization,” said Fraser. “We understand our responsibility to the League and to the Pearland community to sustain and grow our reputation with inclusive participation, respect for all and most of all enjoyment by excelling at this standard. We look forward to this partnership with USL League Two.”

Beyond player development, AC Houston Sur takes great pride in the personal growth of its membership. The club dedicates its time to finding its players local employment and encourages players to enroll in trade schools to better position themselves for a career after the pitch. In addition, AC Houston Sur has consciously partnered with United Way to assist its membership in finding resources for counseling programs, advice and help as needed.

Through membership in League Two, AC Houston Sur will be able to continue its mission of player growth by giving its players access to a proven pathway toward a career in professional soccer. The club’s coaches and community will also see the benefits of membership in League Two as the USL provides pathways for coaches, executives, club staff and communities to continue their growth within the game.

“We are thrilled to welcome AC Houston Sur to League Two for the 2022 season,” said Joel Nash, Vice President of Youth & Pre-Professional. “By establishing a tried and tested pathway to the professional level through membership in League Two, AC Houston Sur has committed to providing more opportunities for Texas-based players to pursue careers in the men’s pre-professional space. We look forward to seeing all that this club will accomplish in its inaugural season with the league.”