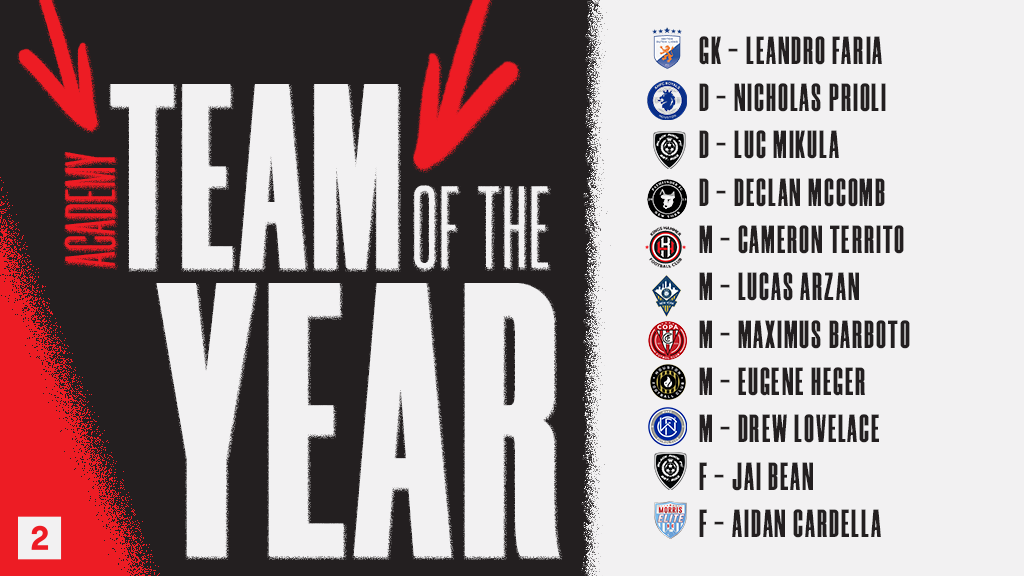 Selections for the 2021 USL League Two x Academy League Team of the Year were determined by the USL scouting network. Players were selected based on regular season performances in both the League Two and Academy League seasons.

Born in 1999, Faria showed off his talent in goal this season playing in four matches for the Dayton Dutch Lions while simultaneously competing with the Dutch Lions’ USL Academy League team. In his 284 minutes in goal, Faria made 19 total saves.

18-year-old Prioli played in 12 of 14 matches for the AHFC Royals this summer, recording a total of 599 minutes. The young defender helped his defense maintain two clean sheets, contributing to the Royals fourth place standing in the Mid Atlantic Division. In addition, Prioli added one assist to his team this summer and was a standout in the 2021 Academy League season.

Western Illinois University junior, Territo made his mark during the 2021 season playing for both Kings Hammer FC’s League Two and Academy League squads. Territo played in a total of 11 matches in the 2021 League Two season and managed to add two assists to his season record in his 617 minutes on the pitch.

New York native Arzan proved to be a valuable asset to FA Euro’s offensive presence during the 2021 League Two season. In the nine matches he graced the pitch, Arzan contributed one assist and took six total shots on goal, ultimately leading the team to a final record of 4-5-5. The 2021 Path2Pro alum also competed with FA Euro’s USL Academy League team this season.

Born in 2003, Barboto played the 2021 season with both New Jersey Copa FC’s League Two and USL Academy League teams. The New Jersey native played in ten matches during the Path2Pro season for a total of 893 minutes. In his time on the pitch, Barboto assisted his League Two side in maintaining three clean sheets while only conceding 18 goals this season.

Houston FC’s Heger was a leading playmaker this season in a competitive League Two Mid South Division. In the ten matches he played in during the 2021 League Two season. Heger managed to add two assists to his stat line, earning him the title of leader in assists for the Texas-based team. In addition, Heger also played the 2021 season with Houston FC’s USL Academy League team.

18-year-old Lovelace had a phenomenal season with both Wake FC’s League Two and Academy League teams. In just four matches, Lovelace was able to slot home two goals for the North Carolina-based team, earning him a second place finish among goal-scorers on Wake FC’s senior squad.

Hamilton, Bermuda native Bean played in eight Path2Pro matches during the 2021 season in addition to competing with Black Rock FC’s Academy League team. In his 401 minutes on the pitch, the Black Rock FC striker added one goal and one assist to his name. His offensive finesse helped Black Rock FC to a fourth place standing in the Northeast Division.

18-year-old Cardella played in two regular season matches for Morris Elite SC this summer. In his 151 minutes on the pitch, the Morris Elite forward contributed a game winning goal against FC Motown. In addition, Cardella competed on Morris Elite’s USL Academy League team in the 2021 season.