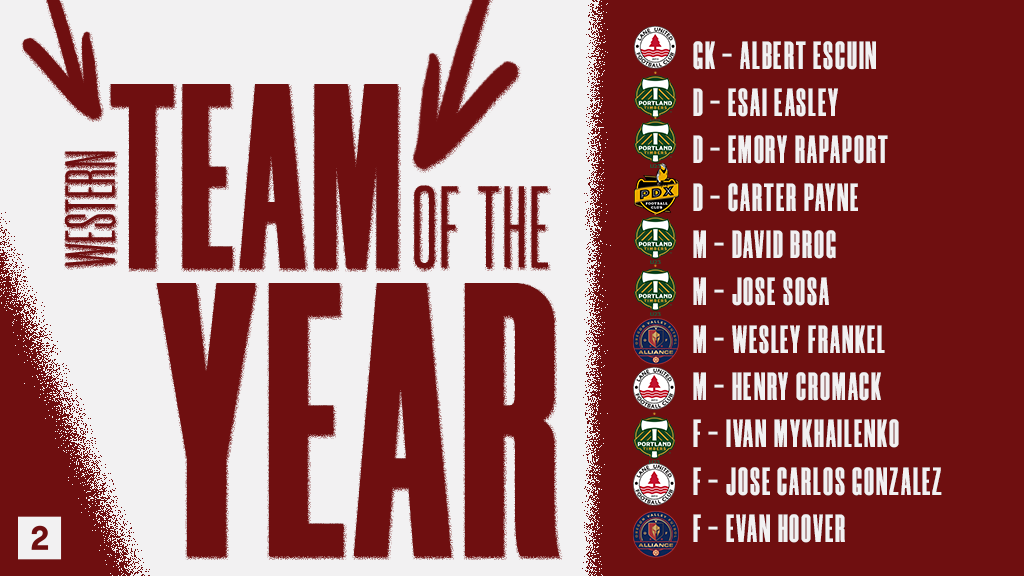 Lane United FC goalkeeper Escuin played in eight matches for the Oregon-based club during the 2021 League Two regular season. In 675 minutes of play, Escuin made a total of 46 saves and recorded one clean sheet this summer, helping the club to a successful 2021 regular season.

League Two Top Prospect Easley was a standout defender in his first Path2Pro season. Easley helped the Portland Timbers U23 to a first place standing in the Northwest Division and a spot in the 2021 League Two National Semifinals. In his 495 minutes on the pitch, the Timbers U23 defender helped his back line to record four clean sheets on top of conceding only 11 goals during the regular season.

Rapaport played in nine regular season matches for the Portland Timbers U23 this summer. In his 539 minutes on the pitch, Rapaport assisted his Timbers U23 defense in recording four clean sheets and conceding only 11 goals, one of the best defensive records in the league this summer. His intensity on the pitch and ability to stifle an offensive drive helped the Timbers U23 to a first place standing in the Northwest Division and a trip to the 2021 League Two National Semifinals.

Payne was one to watch this season as PDX FC took on its inaugural season in League Two. The Path2Pro defender played in seven matches this summer for the Oregon-based club for a total of 585 minutes of play. While on the pitch, Payne helped the PDX defense record one clean sheet and aided the team to a second place standing in the Northwest Division. PDX FC ended the 2021 regular season with a record of 7-4-1.

Brog made the most of every minute he played for the Timbers U23 this summer, helping his team to first place standing in the Northwest Division. During his 550 minutes on the pitch, Brog assisted his defense in recording four clean sheets while only conceding 11 goals this season. On top of his work in the defensive half, Brog also lended a hand in the Timbers U23’s offensive presence and helped the team record 27 goals during the regular season.

Portland Timbers U23 midfielder Sosa cooked up some big plays this year for the Oregon-based team in the attacking half. In 460 minutes of play, Sosa managed to score one goal for the Timbers U23, adding to the team’s 27 goal total at the end of the 2021 regular season. In addition, Sosa’s defensive skills assisted the Timbers U23 in only conceding 11 goals this summer. His presence on the field no doubt was a large factor in the Timbers U23’s first place standing in the Northwest Division and qualification for the 2021 League Two National Semifinals.

Standout midfielder for OVF Alliance, Frankel played in five matches for the Oregon-based team this summer. In 437 minutes of play, Frankel managed to add two goals to OVF’s 16 goal total this season. On top of recording the second highest number of goals for OVF Alliance this summer, Frankel also greatly assisted OVF Alliance to a successful regular season record.

Center mid Cromack was one of Lane United’s top players in the 2021 Path2Pro season. Cromack played in nine matches for Lane United for a total of 608 minutes of play. In his time on the pitch, Cromack recorded one assist and three goals, making him the second highest goal-scorer for Lane United FC this season. His ability to maintain control on both sides of the ball earned Cromack a spot on the most recent edition of the League Two Top Prospects list.

OVF Alliance forward Hoover was a playmaking machine in the 2021 League Two regular season. In his 312 minutes on the pitch, Hoover added two goals to OVF’s 18 goal total and contributed one assist. His tenacity on the pitch helped lead OVF to a third place standing in the Northwest Division.