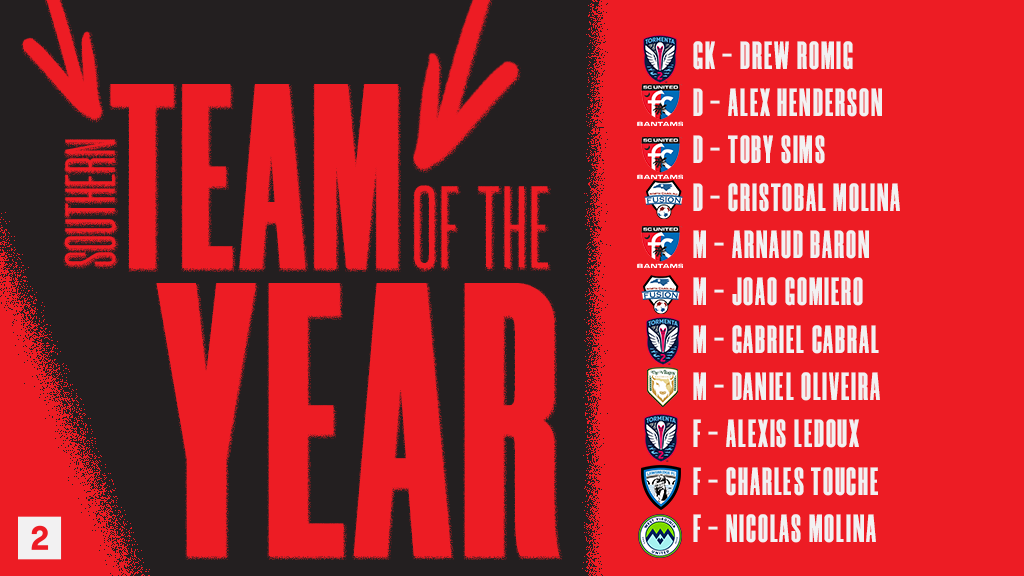 Romig was a solid presence between the sticks this season, playing a total of 876 regular season minutes and ending the summer with a .31 goals against average, while maintaining five clean sheets. The goalkeeper’s ability to read the field and stay light on his feet allowed him to only concede three goals during the regular season and helped Tormenta FC 2 make a run all the way to the 2021 League Two Conference Finals.

No. 5 on the most recent edition of the League Two Top Prospects list, Henderson played in 11 regular season matches for the Bantams this summer. In 738 minutes of play, Henderson assisted the Bantams’ defense in retaining five clean sheets while only allowing 13 goals over the course of the 2021 regular season. Henderson’s standout moment of the year came during the 2021 League Two Playoffs when he punched an equalizer into the back of the net to give the Bantams the momentum they needed to beat West Virginia United in the Conference Quarterfinals.

Sims played an integral part in leading the Bantams to a first place standing in the Deep South Division and a berth in the 2021 League Two Playoffs. The Bantams’ defender recorded 1,108 minutes of play during the regular season and managed to net two goals and one assist. In the 13 matches that Sims was on the pitch, the Bantams conceded only 13 goals, kept five clean sheets and lost just once. Sims’ impressive performances in the defensive half earned him the title of the 2021 League Two Defender of the Year.

As one of the strongest defenders in the league, Molina fought every second of the Path2Pro season to help his team earn a spot in the 2021 League Two Final. In the 792 minutes he was on the pitch, Molina netted two goals and one assist for the North Carolina-based team. On top of his ability to be a playmaker for the Fusion U23 squad, he also helped the Fusion U23’s defense record six clean sheets. His impressive performance during the 2021 season earned Molina a spot on the League Two Top Prospects list, as well as a first place standing for his team in the South Atlantic Division, a Southern Conference title and a trip to the 2021 League Two Final.

With six goals this season, Baron led the Bantams as the top goal-scorer for the South Carolina-based side. On top of his six goals, Baron also contributed three assists in the 2021 regular season and helped lead his team to a berth in the 2021 League Two Playoffs and a first place standing in the Deep South Division. Playing 848 minutes this summer, Baron established himself as one of the top all-around contributors to the Bantams this year.

The quick-minded midfielder was a steady presence for the Fusion U23 squad, playing a total of 794 minutes and scoring six goals while leading the team and the league with eight assists, which earned Gomiero the title of the 2021 League Two Assists Champion. Gomiero was an essential part of the Fusion squad as the team earned the honors of South Atlantic Division title-winners, Southern Conference title-winners, top goal-scorers of the league with 48 goals and a much-deserved spot in the 2021 League Two Final.

Cabral made the most of every minute he played for South Georgia Tormenta FC 2 in the 2021 season, scoring three goals and adding three assists to his name. His persistent offensive efforts paid off and helped earn Tormenta FC 2 a spot in the 2021 League Two Conference Finals. The promising forward was a crucial playmaker for the Georgia-based side, who ended the regular season with a record of 10-3-1.

Oliveira was a standout among Path2Pro midfielders in the 2021 season. In 715 minutes of regular season play, Oliveira netted three goals for The Villages SC and contributed one assist. Through his aggressive offensive presence, Oliveira helped The Villages earn a first place standing in the Southeast Division for a second year in a row as well as a spot in the 2021 League Two Conference Semifinals.

With 10 goals and four assists to his name in the 2021 Path2Pro season, Touche was the top goal-scorer and leader in assists for Lionsbridge FC this summer. In Lionsbridge’s second match of the 2021 season, Touche put up a hat trick, helping his team to a 7-1 victory over North Carolina FC U23. Standing at No. 31 on the League Two Top Prospects list, Touche was no doubt a difference maker in the team’s second place finish in the South Atlantic Division and trip to the 2021 League Two Playoffs

Molina was a terror for opposition defenses this year, contributing to 16 of West Virginia United’s 31 goals in the 2021 season. Molina’s most impressive performance of the year came when West Virginia faced Wake FC and saw the striker put away a whopping four goals in 82 minutes played. Molina’s 16 goals and overall dominating performance earned him the title of 2021 League Two MVP and Golden Boot winner.