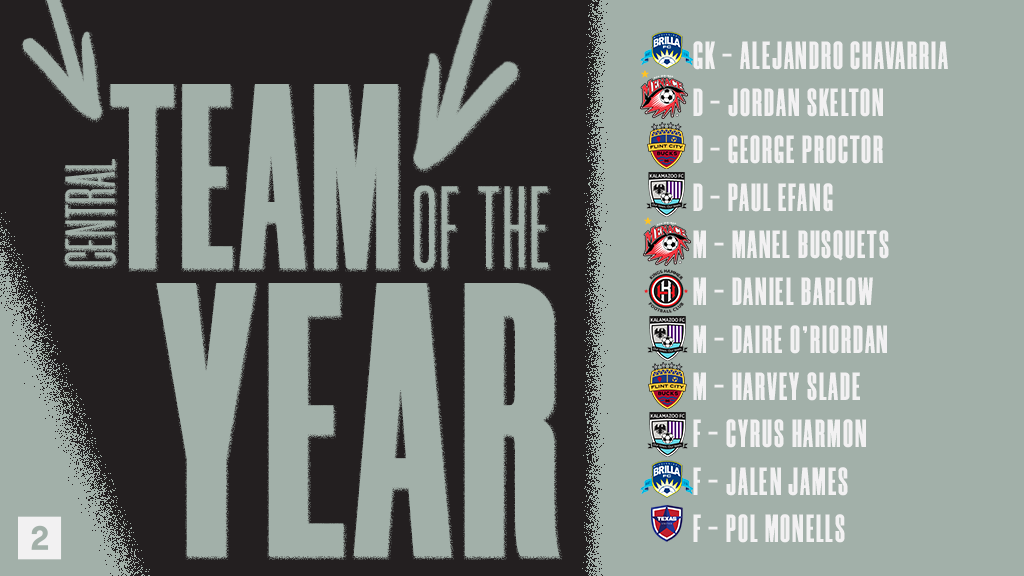 Week 6 Save of the Week winner, Chavarria has been one of the most impressive keepers to watch this season. Over the course of the season, Chavarria played in 10 regular season matches for a total of 900 minutes of play. The talented keeper managed to concede only seven goals while recording a .60 goals against average and keeping four clean sheets. Chavarria’s excellence in goal helped the Mississippi-based team to a first place standing in the Mid South Division as well as a spot in the 2021 League Two Playoffs.

Skelton was a major standout defender during the 2021 League Two regular season playing a total of 842 minutes for the Menace over the course of 12 matches. His outstanding ability to read the field and fiery presence in the defensive half helped the Menace to only concede seven goals all season while recording six clean sheets. Skelton was a key component of the Menace’s incredible run in the 2021 season, which saw the team boast a regular season record of 11-1-0, a Heartland Division title, a Central Conference title and a 2021 League Two title-winning season.

Proctor was a powerhouse defender for the Flint City Bucks in the 2021 season. The Bucks defender played in all but one match for Flint City for a regular season total of 1,052 minutes of play. In his time on the pitch, Proctor was able to contribute one assist to the Bucks and helped the team’s defense in conceding only nine goals. His defensive skills were recognized and rewarded with a spot in the top 20 players of the most recent edition of the League Two Top Prospects list.

Ending the season with a record of 9-1-4, Kalamazoo’s Efang was a major component of the Michigan-based teams defense. In 876 minutes of play, Efang assisted Kalamazoo’s defense in only conceding 13 goals while maintaining three clean sheets. His presence on the back line helped Kalamazoo to a Great Lakes Division title and a spot in the 2021 League Two Central Conference Final.

The 2021 League Two Final MVP, Busquets was the key difference maker in the Des Moines Meance’s title-winning season. The Path2Pro striker scored the lone goal of the League Two Final after beating the Fusion U23 keeper and slyly placing a strike into the bottom left corner of the net. In his 469 minutes of regular season play, Busquets managed to score two goals and contribute two assists to the 2021 League Two title-winners. Busquets’ playmaking ability and consistent performances on the pitch earned him the No. 27 spot on the most recent edition of the League Two Top Prospects list.

Top goal-scorer and leader in assists for Kings Hammer FC, Barlow had a standout season with the new Path2Pro club playing in all but one match this summer for the Ohio-based team. In 1,066 minutes of play, Barlow added four goals and contributed five assists while helping the team qualify for the 2021 League Two Playoffs in its inaugural season. His persistent efforts in the offensive half assisted Kings Hammer in recording a regular season record of 8-2-4.

In 830 minutes of Path2Pro play this season, O’Riordan helped Kalamazoo FC record a final regular season record of 9-1-4 while earning a spot in the 2021 Conference Finals. The talented midfielder was a consistent contributor to Kalamazoo’s offense, putting up four goals and one assist for the Michigan-based side. His ability to maintain control on both sides of the ball was a key factor in Kalamazoo’s success and first place standing in the Great Lakes Division.

Playing in all but one match this summer, Slade logged a total of 1,056 minutes for the Flint City Bucks. The Bucks midfielder exercised his offensive skill on the pitch this year adding three goals and four assists to his team while also helping the Bucks to a season record of 9-3-2 and a trip to the 2021 League Two Conference Semifinals.

The leading goal scorer for Kalamazoo FC, Harmon saw a total of 524 minutes of play in the 2021 regular season. In those 524 minutes, Harmon was able to slot home eight goals for the Michigan-based team. Harmon’s presence in the offensive half was a key element of Kalamazoo’s success in its inaugural season as the team took home a Great Lakes Division title and a spot in the 2021 League Two Playoffs.

No. 14 on the most recent League Two Top Prospects list, James was a main contributor to Mississippi Brilla’s offensive efforts this season. James recorded five goals and two assists in the 11 matches he was on the pitch during the regular season. His goal in the 2021 League Two Conference Quarterfinals helped Brilla advance to the next round of the playoffs where the team fell just short to Kalamazoo FC in penalty kicks. James’ offensive finesse helped Mississippi to a regular season record of 8-2-3.

The leader in goals, assists and minutes for Texas United, Monells was nothing short of incredible this season. The Texas United striker logged a total of 975 minutes during the 2021 regular season and recorded eight goals and five assists for his team. During Texas United’s June 8 match against Round Rock SC, Monells scored a hat trick for his most impressive performance of the season. His ability to create plays was no doubt a major contributing factor of Texas United’s qualification for the 2021 League Two Playoffs.