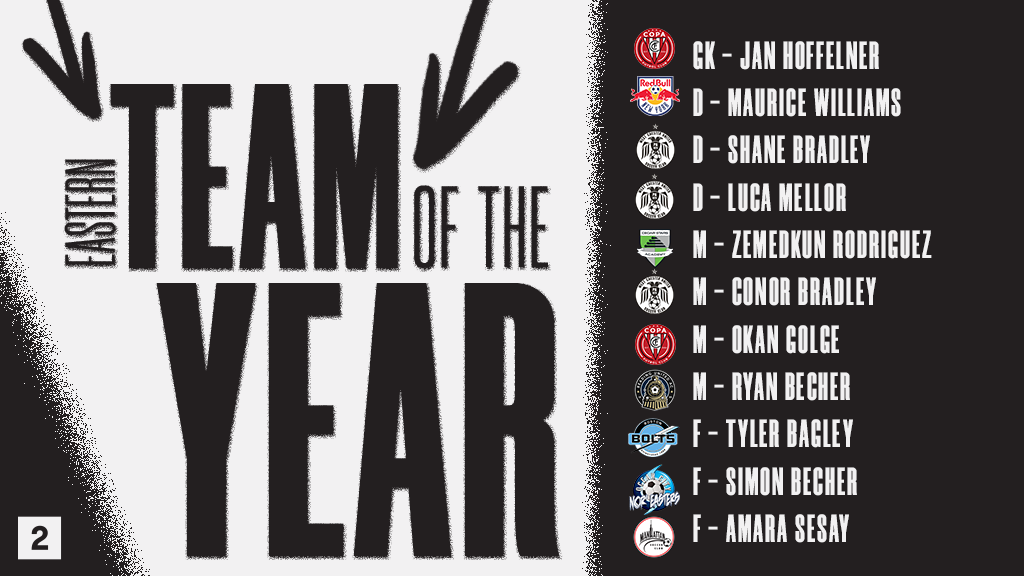 Starting goalkeeper for New Jersey Copa FC, Hoffelner played in nearly every match this season for the New Jersey-based team for a total of 1,087 minutes. In his 12 matches on the pitch, Hoffelner kept three clean sheets and put up a goals against average of 1.08. His calm demeanor and quick reflexes helped his side concede only 13 goals this summer.

Defender Maurice Williams played in 9 of 14 matches for the New York Red Bulls U23 in the 2021 League Two regular season. In 765 minutes of play, Williams contributed one assist to his team while helping his back line record five clean shutouts. Williams and the Red Bulls U23 defense was a force to be reckoned with this summer, conceding only 10 goals in total and leading the team to a final regular season record of 7-3-4.

Recording the second-most number of minutes for West Chester United SC, Bradley played in 12 out of 14 regular season matches for a total of 1,049 minutes in the 2021 season. The Predators defender was one to watch as he helped his team record a whopping 10 clean sheets while conceding only six goals. West Chester United’s defense was one of the strongest in League Two this summer and proved their strength through a qualification in the 2021 League Two Playoffs and a first place standing in the Mid Atlantic Division.

With 1,208 minutes of Path2Pro play under his belt this season, Mellor was a steady contributor to the Predators’ defensive presence in the 2021 season, helping the team to a final record of 11-1-2 and a Mid Atlantic Division title. In the 14 matches Mellor was on the pitch, West Chester managed to concede only six goals, positioning the team as one of the strongest defenses in League Two this season.

Rodriquez has been a major standout in his first year of Path2Pro, consistently landing himself in the top 20 players among League Two’s Top Prospects list. Rodriquez took control of the midfield and helped assist his team to a regular season record of 8-3-3, earning the Cedar Stars Rush a spot in the 2021 League Two Playoffs. Throughout the season, Rodriquez recorded 991 minutes of play in 12 matches and managed to slot home seven goals, earning him the title of top goal-scorer for Cedar Stars Rush and the title of 2021 League Two Young Player of the Year.

Path2Pro midfielder Bradley was a sight to see in the 2021 League Two season. In his 943 minutes of regular season play, Bradley contributed one goal and one assist to the Predators, helping the team to a first place standing in the Mid Atlantic Division. While on the pitch, Bradley also helped contribute to West Chester’s 10 clean sheets and final regular season record of 11-1-2.

Top goal-scorer for New Jersey Copa FC, Golge was an offensive nuisance for Path2Pro defenders this season. In his 719 minutes on the pitch, Golge recorded five goals adding to New Jersey’s 15 goals this season. In addition to his work in the offensive half, Golge also assisted the Copa defense in retaining three cleans sheets this summer.

Starting midfielder for Reading United AC, Becher played in 12 matches for the Pennsylvania-based team this summer. In 1,076 minutes of play, Becher managed to add three goals to Reading’s 18 goal total this season. On top of recording the highest number of minutes for Reading this summer, Becher also greatly assisted the Reading defense in maintaining three clean sheets.

No. 23 on the latest edition of the League Two Top Prospects list, Bagley was the top goal-scorer for the Bolts this season accounting for 12 of Boston’s 27 goals. His most impressive performance of the summer took place in the Bolts first game of the season when Bagley recorded a hat trick against the Western Mass Pioneers. His quick speed and offensive finesse were major contributors to the Bolts record of 10-3-0 and the team’s berth in the 2021 League Two Playoffs.

No. 9 on the most recent edition of the League Two Top Prospects list, Becher was a standout forward in this year's Path2Pro season. With 11 goals to his name, Becher earned himself the title of top goal-scorer for the Ocean City Nor’easters, who ended their season with a regular season record of 9-2-3 and a second place standing in the Mid Atlantic Division. In addition to his 11 goals, Becher also recorded one assist for the New Jersey-based team in his 787 minutes of regular season play.

Manhattan SC’s Sesay was an absolute powerhouse during the 2021 League Two season. The dynamic forward played 967 minutes for Manhattan SC during the regular season and contributed six goals over the course of 13 matches. On top of being the top goal-scorer for the club, Sesay also showed his playmaking abilities this season by adding four assists to his resume. His persistence in the offensive half helped lead Manhattan SC to a final regular season record of 7-4-3.