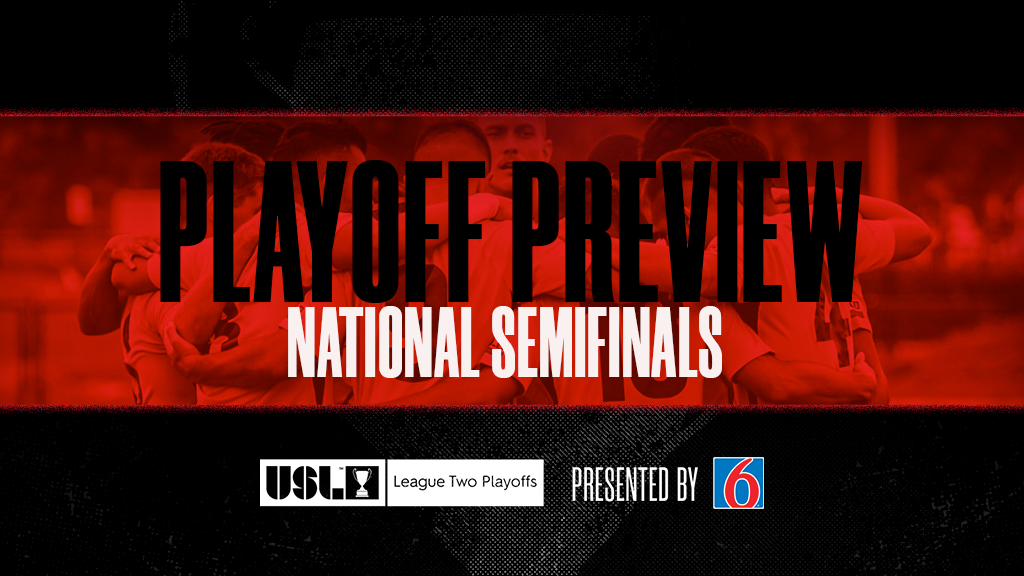 TAMPA, Fla.- The 2021 League Two Playoffs Presented by Motel 6 continue this weekend with the National Semifinals. After competing to raise Conference titles on Friday night, the four remaining teams now look to secure a spot in the League Two National Final on Saturday, July 31. Ahead of tonight’s matches, here is how the competition stacks up.

North Carolina Fusion U23’s road to the National Semifinals was one for the books. On Friday night, Fusion U23 faced off against the mighty South Georgia Tormenta FC 2 for the Southern Conference Final. The Fusion’s Joao Gomiero opened up the scoring after earning a penalty kick and slotting it home for an early golazo. The momentum continued through the half as Henrique Santos put a diving header on a deflection in the box. However, the trust test for the Fusion U23 arrived when Tormenta FC 2 came back from a two point deficit to even the score sending both sides into another 30 minutes of physically and mentally grueling play. Despite the added adversity, the Fusion pushed on and ultimately found the back of the net twice in extra time thanks to the clutch foot of both Cristobal Molina and Mason Duval. As the final whistle blew, the lads rushed the field to raise a Southern Conference title and celebrate a trip to the National Semifinals.

The Western Mass Pioneers took the road less traveled by many teams in the Conference Finals. On Friday night, the Pioneers squared off against new League Two club West Chester United SC. The lads entered the pitch with a winning mentality and a physical finesse that proved to be untouchable that night. Just 13 minutes into the match, top goal-scorer for the Pioneers Ignacio Lerech made a blistering run toward the net working his way through multiple Predator defenders and ultimately found the back of the net on a left-footed strike into the top bin. However, the night’s work wasn’t done yet as the feisty West Chester Predators continued attacking the Pioneers goal testing goalkeeper Blake Mullen with every shot taken. Ultimately, Mullen and his defensive line were able to hold down the fort securing a clean sheet for the keeper and sending the team to the National Semifinals with Eastern Conference bragging rights in their pocket.

As the teams head into tonight’s National Semifinal match, both sides will need to push their bodies and minds to the fullest degree. The Fusion U23 has proved that their strength on the pitch comes in the form of offensive finesse, however as evidenced by the Pioneers’ Conference Final match, the Massachusetts-based club knows how to keep a strong offensive presence at bay. With that being said, both sides look to be pretty evenly matched leaving the lone difference maker in tonight’s match up to who wants it more. Regardless of the outcome, the winner of tonight’s National Semifinal will move on to compete against either the Portland Timbers U23 or the Des Moines Menace in next weekend’s League Two National Final.

Tonight’s 2021 League Two National Semifinal will see the Des Moines Menace face off against the Portland Timbers U23 to compete for a spot in the National Final on Saturday, July 31.

The Des Moines Menace have proven time and time again that a steady mindset and calm presence on the pitch makes all the ingredients for a typical Menace win. These Menace ingredients were in full swing on Friday night as the Iowa-based club competed against Kalamazoo FC for the Central Conference title. The night kicked off in the 23rd minute as Kalamazoo found an early goal in the first half, but the Menace managed to even the score in stoppage time of the first half earning a penalty kick allowing Manel Busquets to put the Menace on the board. As the minutes ticked down, both sides found themselves all tied up in the 90th minute of the match with Menace fans on edge and a likely 30 minutes of extra time looming over the players. However, a Menace miracle came true in stoppage time of the second half when Zyan Andrade found the ball at his feet and played a beautiful long ball to Reshaun Walkes who popped a floating ball in the air over the keeper finding himself on the other side to head the ball into the back of Kalamazoo’s net. An emotional James Thomas dropped to his knees as the final whistle blew securing a Central Conference title for the Menace in a storybook ending.

For the Portland Timbers U23, the road to a Western Conference title was marked by high scoring lines, an exhaustive 120 minutes of play and a round of penalty shootouts. The Timbers U23 took the field on Friday night to face off against the Park City Red Wolves in the Western Conference Final. With only a few fans in the stands, both sides found themselves having to self-motivate through a game filled with plenty of adversity. The scoring opened in the second minute of the game as the Red Wolves found the back of the net, but the Timbers U23’s Marco Afonso immediately answered with his own curling strike to the bottom of the Red Wolves’ net. Only minutes later, Jose Sosa cooked up a goal of his own, sending another powerful strike past the Red Wolves keeper. As the Timbers U23 headed into the second half, a penalty kick in the 56th minute gave the Oregon-based club a comfortable 3-1 lead. However, the Red Wolves managed to climb their way out of a two point deficit to even the score as the final whistle blew sending both sides into a grueling 30 minutes of extra time. Ultimately, the score remained and left the Timbers U23 having to decide their fate in penalty kicks. Goalkeeper Trevor Wilson then stepped up to the plate making a huge save on a Red Wolves penalty sending his team to the National Semifinals as the lads rushed to his side to celebrate a Western Conference title.

There is no doubt that tonight’s National Semifinal match will test both teams on an elite mental and physical level. The Timbers U23 proved in the Conference Final and throughout their season that they have the gumption to push through whatever barriers are put in their way. For the Menace, team unity sits at the forefront of their success on the pitch. Although tonight’s match will test the players’ physical skills out on the pitch, the winner of the match will ultimately be the team that can keep both their bodies and minds locked in until the final whistle.