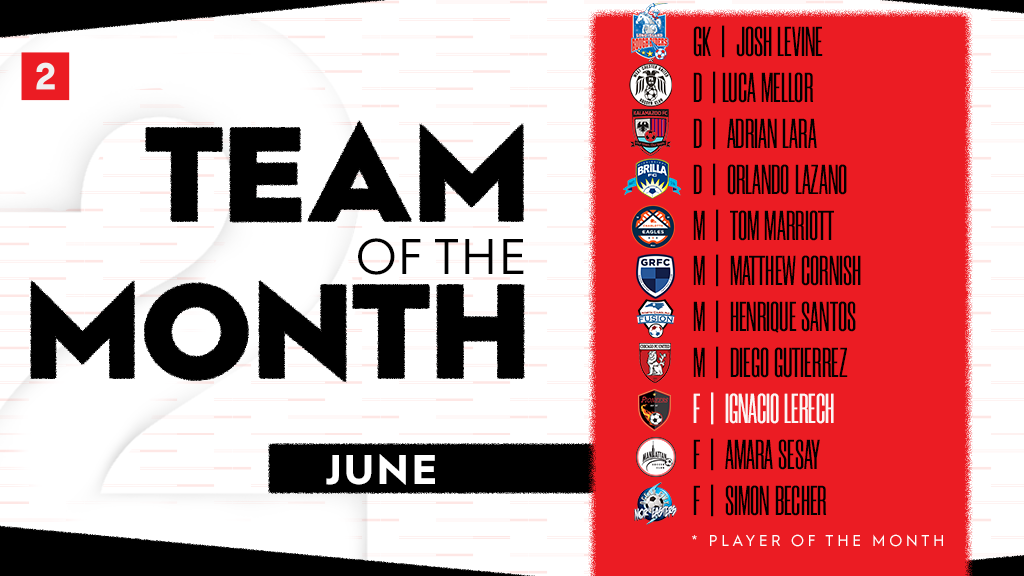 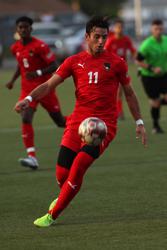 TAMPA, Fla. - USL League Two announced today the Team of the Month for June of the 2021 regular season, with Western Mass Pioneers’ forward and League Two Top Prospect Ignacio Lerech named Player of the Month after putting up seven goals and three assists over a six-game span in June.

The Tucuman, Argentina native has been a key player for the Pioneers in the month of June leading his team to the top of the Northeast Division table. Lerech suited up for the Pioneers in all six of its June matches and managed to score in five of those six matches leading the Pioneers to an undefeated record in June. As it stands, Lerech sits in second place for leading goal scorer in the league with 11 goals so far in the 2021 regular season. Outside of his tremendous ability to finish a play, Lerech has also been a playmaker in the offensive half for the Pioneers adding three assists in the six match span in June. As the Pioneers make their run for a spot in the 2021 League Two Final, Lerech is sure to be one of the players to watch in this year’s playoffs.

GK - Josh Levine, Long Island Rough Riders: Levine has been an absolute brick wall between the sticks in the second month of Path2Pro play. The League Two Top Prospect played in all five games in the month of June and conceded only one goal the entire month. In addition, Levine also leads the entire league with a 0.13 goals against average. The young keeper’s presence in goal has no doubt been a major factor in the Rough Riders’ success in the Metropolitan Division.

D - Luca Mellor, West Chester United SC: Mellor has been a dominant presence in the back field starting in every match in the month of June and playing all 90 minutes of each match. With only one goal conceded in five matches in June, Mellor has no doubt been a key factor in West Chester United’s first place position in the Mid Atlantic Division.

D - Adrian Lara, Kalamazoo FC: Lara was a major standout this month playing in eight of nine matches for Kalamazoo FC in June and recording a total of 698 minutes. In addition to helping lead the team to five wins and three ties in June, Lara also recorded a goal in Kalamazoo’s match against the South Bend Lions on June 9.

D - Orlando Lazano, Mississippi Brilla FC: Lazano was on fire in the month of June playing a total of 531 minutes in six matches for Mississippi Brilla. The Cali, Columbia native also managed to score a goal in Brilla’s June 26 match against Texas United and has used his stellar defensive skills to help lead Brilla to a Mid South Division title.

M - Tom Marriott, Charlotte Eagles: Coming in at No. 36 on the third edition of the League Two Top Prospects list, Marriott has been a force to be reckoned with in the midfield. The Eagles center mid played in all eight matches in June for the Eagles and slotted home five goals in the 676 minutes he played during the month. In addition, Marriott also recorded three assists this month.

M - Matthew Cornish, Grand Rapids FC: The leading goal scorer for Grand Rapids FC, Cornish saw a total of 515 minutes of play in June. In those 515 minutes, Cornish was able to slot home six goals throughout the month bringing his total to 11 goals on the season. His two goals on June 26 allowed Grand Rapids FC to beat top competitors the Flint City Bucks in a 2-1 win.

M - Henrique Santos, North Carolina Fusion U23: Week 4 Goal of the Week winner, Henrique Santos has been a solid presence in the midfield for North Carolina Fusion U23. Santos took June by storm recording five goals in six matches for the Fusion U23 helping lead the team to South Atlantic Division title. In addition, Santos solidified his spot in the third addition of the League Two Top Prospects list coming in at No. 39.

F - Amara Sesay, Manhattan SC: Sesay has made the most of every minute he has played for Manhattan SC in June scoring five goals and adding four assists to his name. His persistent offensive efforts have paid off, earning him a leading spot in both goals and assists for Manhattan SC. The promising forward continues to be a crucial playmaker for the Manhattan SC squad as they look to secure a spot in the 2021 League Two Playoffs.

F - Simon Becher, Ocean City Nor’Easters: Powerful forward Simon Becher is moving up the ranks in Path2Pro as he recently claimed his spot as No. 12 in the League Two Top Prospects list. Becher played in all seven of the Nor’Easters’ matches in June and scored five goals throughout the month. Becher’s dominant performances in the offensive half have allowed him to claim the title of top goal scorer for the Nor’Easters with nine goals on the season.