What matches are you tuning into in Week 4? 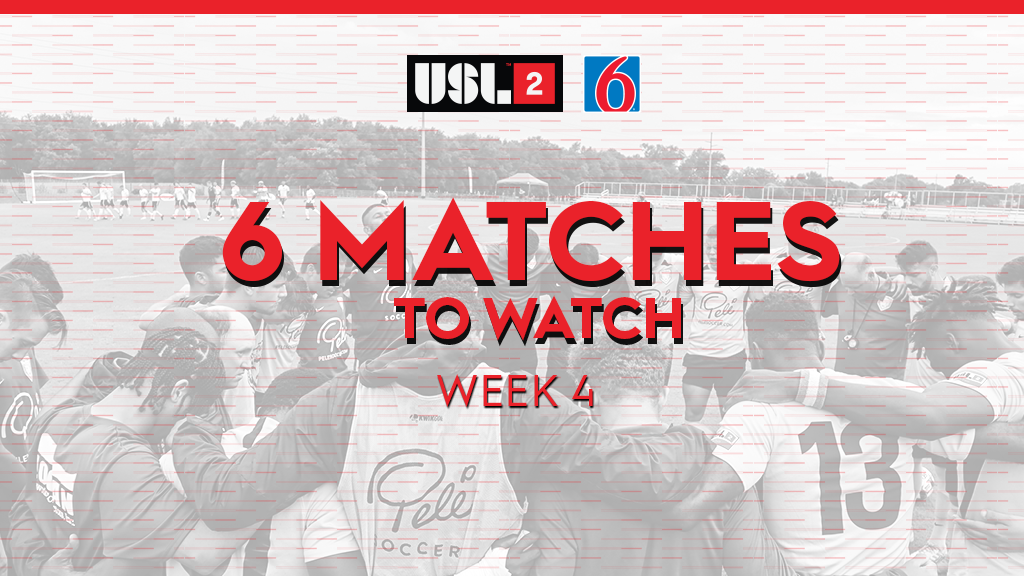 Kings Hammer entered the League Two season making huge waves after its first-ever Path2Pro game against the Dayton Dutch Lions, which saw Kings Hammer’s Karson Kendall score a jaw-dropping bicycle kick in the 91st minute to win the game. The club’s momentum out of the gate has been compelling, however the true test for the new Ohio-based club will be facing the 2019 USL League Two champs, the Flint City Bucks. After winning their season opener, the Bucks have left fans desperate for more action and Kings Hammer looks as though they could give this championship team and its fans a run for its money.

With only 14 miles of land separating these two New Jersey-based teams, it is safe to say that this matchup can officially be dubbed a new local rivalry for League Two. Both Morris Elite SC and New Jersey Copa FC joined League Two for the 2021 season with hopes of proving that maturity in the system does not always translate to wins. However, both teams have struggled in the 2021 season so far to make their teams gel as one on the pitch. With many more weeks to go in the season, both clubs will have ample chances to prove that their players have the prowess to win matches and fight for championships.

Although these teams are separated by state lines, the Path2Pro fans have notably marked this matchup as a new Mid South Division rivalry. After Mississippi Brilla’s brief pause in play last week, the team is more ready than ever to take on the Little Rock Rangers in the club’s legendary War Memorial Stadium. The historic Mississippi side will have its hands full with the Little Rock Rangers as the team has shown an immense amount of skill in its first two games of the season. The action on the pitch this night is sure to be supplemented by the loud chants of the Rangers’ fan section led by the always rowdy Red Watch. The question of the night remains, do the Little Rock Rangers have what it takes to defeat long-time League Two club Mississippi Brilla FC? Tune in to find out.

Mountain Division fans, the wait is over! Colorado Rush and Park City Red Wolves will be taking the pitch to square up for the first Mountain Division clash of the 2021 season on Friday. The night also marks a monumental moment for Colorado Rush as the team takes the field for the first time as a League Two club. With only three teams in the division this year, the teams’ methodologies and styles of play will need to be in constant construction as to not give away any weaknesses to opponents. With Ogden City SC sitting at the top of the 2019 standings for the Mountain Division, both Park City and Colorado Rush will have to prove they have the skill to climb the standings ladder in 2021.

Tampa Bay United’s first-ever League Two “home game” will not be played under normal circumstances as the team will be taking on Weston FC in a showcase event at the first-ever USL Academy Cup National Event, presented by PUMA. Not only will these teams be playing in unfamiliar territory at the Hillsborough County Tournament Sportsplex, they will also be competing in front of the best young talent in the nation proving that pre-professional careers in soccer are an obtainable next step for these youth players as they compete to raise an Academy Cup National title over the course of the weekend. Beyond game details, Weston FC has started the season with a 1-1-1 record whereas Tampa Bay United records a 0-1-1 record. The Academy Cup showcase event should be a good chance for local fans to see what the Tampa-based club has to offer in its inaugural season.

The host of the 2019 Southern Conference Finals is back at home again at the South Eastern Freight Lines Soccer Center and ready to take on the Dalton Red Wolves SC. The 2019 season was a competitive one for the Deep South Division as the SC United Bantams managed to earn a top spot in the standings only besting the Red Wolves by a handful of points on the season. However, with new competitors and an even higher level of competition, the standings have a very real possibility of seeing new clubs rise to the top.