What matches are you tuning into in Week 3? 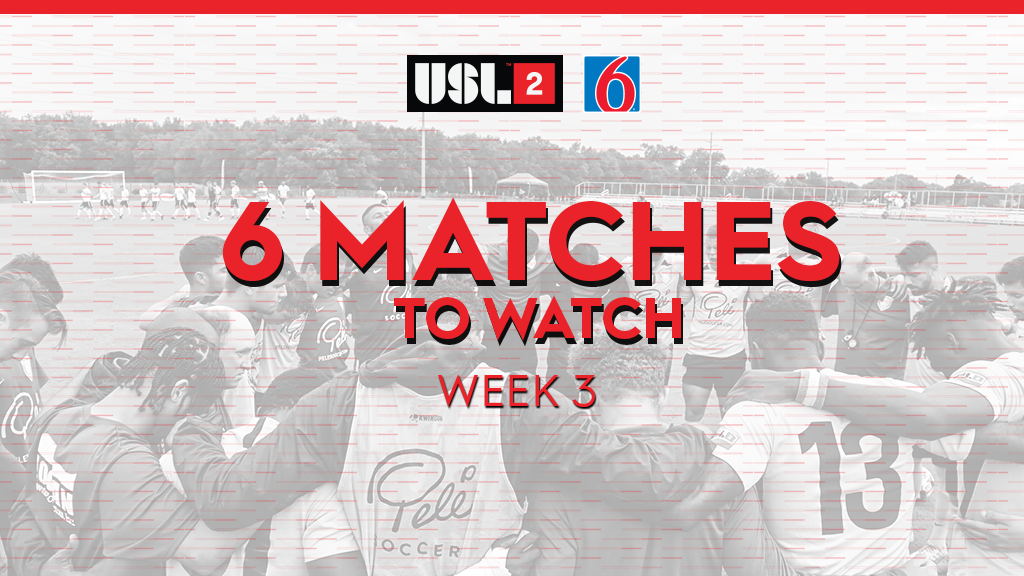 Tuesday, May 18: North Carolina Fusion U23 vs. Tri-Cities Otters

Tri-Cities Otters are hitting the road this week to visit North Carolina Fusion U23 on the other side of the mountains for Week 3 of Path2Pro play. The North Carolina side came out of the gate swinging (or rather kicking) in its first week of League Two play defeating Tobacco Road FC in a stunning 5-0 win. With Tri-Cities first game canceled due to the shortage of gas in the area, the club will be taking its first pass at a League Two game against a fiery Fusion U23. In addition to what we expect to be a game packed full of skill and excitement, the icing on the cake will be the local broadcasting of the game to over one million viewers in the western Carolinas.

As one of the newest members of USL League Two, Kings Hammer will be hosting its first-ever home opener against Kalamazoo FC, who are also kicking a Path2Pro ball for the first time this season. In the clubs’ first week of play, Kings Hammer took a 2-1 win over the Dayton Dutch Lions after an incredible bicycle kick ender from Karson Kendall while Kalamazoo bested the South Bend Lions in a 1-0 win on a Sam Layton rocket volley. The Ohio versus Michigan matchup should be a good way for fans to identify what new talent is arising out of the always competitive Great Lakes Division.

The 2019 Northeast Division champs are holding down the fort at Lusitano Stadium as they prepare to take on their neighbors to the north. The Western Mass Pioneers were a sight to see in 2019 as they posted an 11-0-3 record on the past season, however with the club’s recent loss to Boston Bolts in a 0-4 end score it looks as though the Phantoms might have the upper hand on this matchup as they posted a 1-0 win over the Bolts. Is it possible that the Phantoms take the win over the favored Pioneers side? Tune in to find out!

Saturday, May 22: The Villages SC vs. FC Miami City

The 2019 Southeast Division champs are searching for another title to bring home to Florida as they pursue a competitive 2021 season. The last time The Villages SC and FC Miami City met in July 2019 the clubs ended the match in a 2-2 draw. However, The Villages ended the 2019 season with a 9-1-4 record and a Southeast Division title whereas FC Miami City’s 2019 performance led them to a 5-5-4 record. With completely revamped rosters, the slate is wiped clean for the 2021 season and it's anyone’s game to win.

Lionsbridge FC will step onto its home field of TowneBank Stadium to take on Wake FC for the first time since the 2019 season, which saw the teams draw in a high-scoring 3-3 match. However, both clubs are hitting the restart button this season with brand new rosters and high hopes of clinching a 2021 South Atlantic Division title. So far, Lionsbridge FC’s offense is looking good as they recently posted a 7-1 win over North Carolina FC U23 while Wake FC has shown dominance in the midfield in its game against West Virginia United. With a competitive schedule ahead for both teams, the fans should keep an eye on the standings in the South Atlantic Division to determine if either club has a true shot at a title-winning season.

In a USL League Two first, Fort Wayne FC will be kicking off its inaugural home opener in style as a helicopter will be flying in to deliver the game ball. In addition to this flashy start, both Fort Wayne and Toledo will be hosting the mayors of their respective towns in a showing of community support. Event details aside, the Great Lakes Division matchups always make for good entertainment for the fans as the competitive division never lacks in skill. However, the real test for these newly established League Two teams will be fighting their way to the top against the well-established clubs in their division.