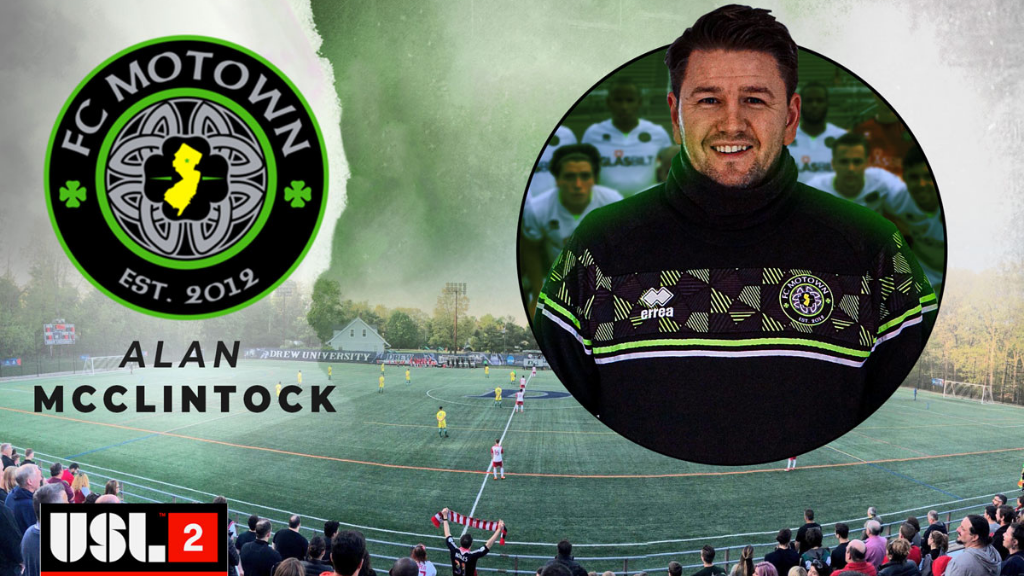 McClintock joined FC Motown in the winter of 2018 as an assistant to Head Coach Sacir Hot. In 2018, Motown went to the National Final eventually losing to Miami FC in front of a sold out crowd of over 2,400 fans at Drew University.

Full time, McClintock is the Director of USA Inc., the soccer division of USA Sport Group, a youth sports provider in New Jersey. McClintock is in his sixth year as the men’s assistant coach at Drew University under nine time Landmark Conference Coach of the Year, Lenny Armuth. In 2017, McClintock helped guide the Rangers to the Landmark Conference title and a berth in the Sweet Sixteen of the NCAA Division III tournament. One year later, he helped coach Drew to the ECAC title.

His time as a young player included stints at Institute FC, Limavady United and Portrush FC. In New Jersey, he played a summer with NJ Rangers (PDL) and multiple seasons with Box2Box and Empire United both in the GSSL.

McClintock said of his first encounter with the club, “I played against them with Empire United. I could play a bit but I wasn't anywhere near the Motown level. We couldn’t get near them that day on the pitch and I could clearly see they had special talents in their ranks. I wanted to advance my coaching, so I connected with Dan and Scott about being on staff.”

McClintock has been coaching for over 18 years, including time with Maiden City Soccer, Liverpool FC, USA Inc. and Summit High School. He has coaching licenses from American, Irish and English federations, as well as a degree in sport development and physical education from Liverpool John Moores University. In the fall of 2020, he set up and coached a very successful competitive U23 program for the club.

“I am delighted to be trusted with this role," said McClintock. "Dan, Scott and Sacir have already provided me with multiple great experiences, including coaching and being around professionals like Julius James and Dilly Duka and our epic Open Cup games. I have not stopped learning since I joined Motown in 2018 and this is another fantastic opportunity they are providing for my development as a coach."

"Alan has done exemplary work as our U23 head coach and also being the lead assistant to coach Hot on our nationally recognized men's team," said FC Motown's Owner Dan Karosen. "We are confident that he will cultivate our young talent and provide them with a competitive and fun summer season".