A look into the lives of the women behind League Two 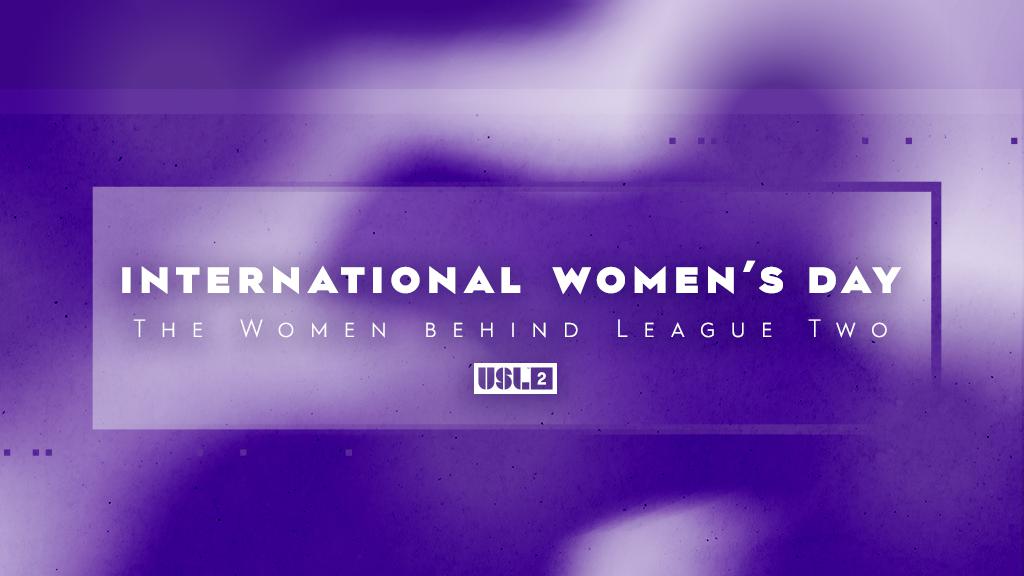 In honor of International Women’s Day, League Two presents a showcase of some amazing women working day in and day out to see the success of pre-professional soccer in the United States. From directors of social media to owners and operations managers, the women of League Two work year-round to ensure their clubs are seeing progress and advancing the mission of player, community, coach and executive development. The women of League Two are filled with passion and dedication and today we celebrate their accomplishments and the path they are paving for the next generation of strong women in sports. 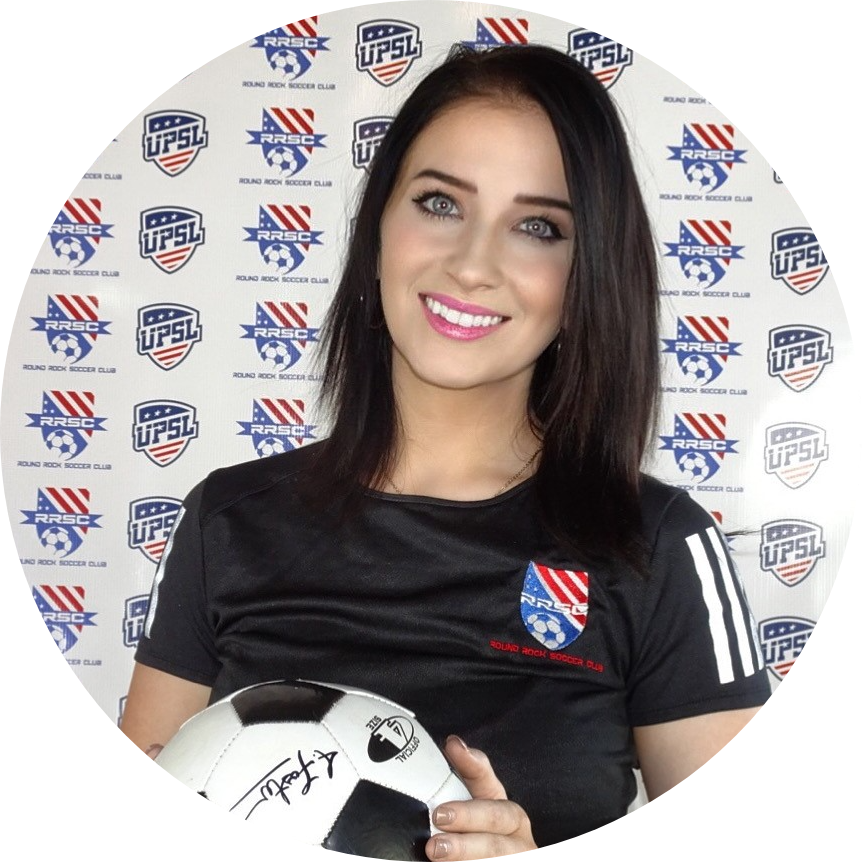 Janna Palacios
Owner and General Manager
Round Rock Soccer Club
"one of the youngest club owners in the USL network"
+
Janna Palacios serves as the Owner and General Manager of Round Rock Soccer Club. Palacios started her career in soccer at the age of 23 sending players to Europe and assisting in the process of successfully contracting them to clubs in Divisions I and II. In August 2017, at the age of 27, Palacios opened the establishment of Round Rock Soccer Club, which was the first semi-pro team in the city of Round Rock. Palacios started the club with the goals of bringing a higher level of competitive play within a national league, giving more players the opportunity to join the organization on a broader scale, providing professional development training and having a base for scouting to offer the players higher divisional play in Europe. She has been instrumental in leading the operations on expanding the level of play within the U.S. tier system by officially entering USL League Two in 2020. In addition, Palacios established a system to make soccer more accessible to youth in Round Rock by expanding the junior academy to include local schools to help the elementary students cut costs and to remove the barrier of transportation as training is performed on site. Aside from what she has done and continues to do for the organization, Palacios is the mother of two children and one of the youngest club owners in the USL network.“Soccer is a growing sport in the US and I think it's so important as a female in this industry that I can provide a platform for little girls in our community to help reach their dreams and be a figure of example that anything is possible,” said Palacios. 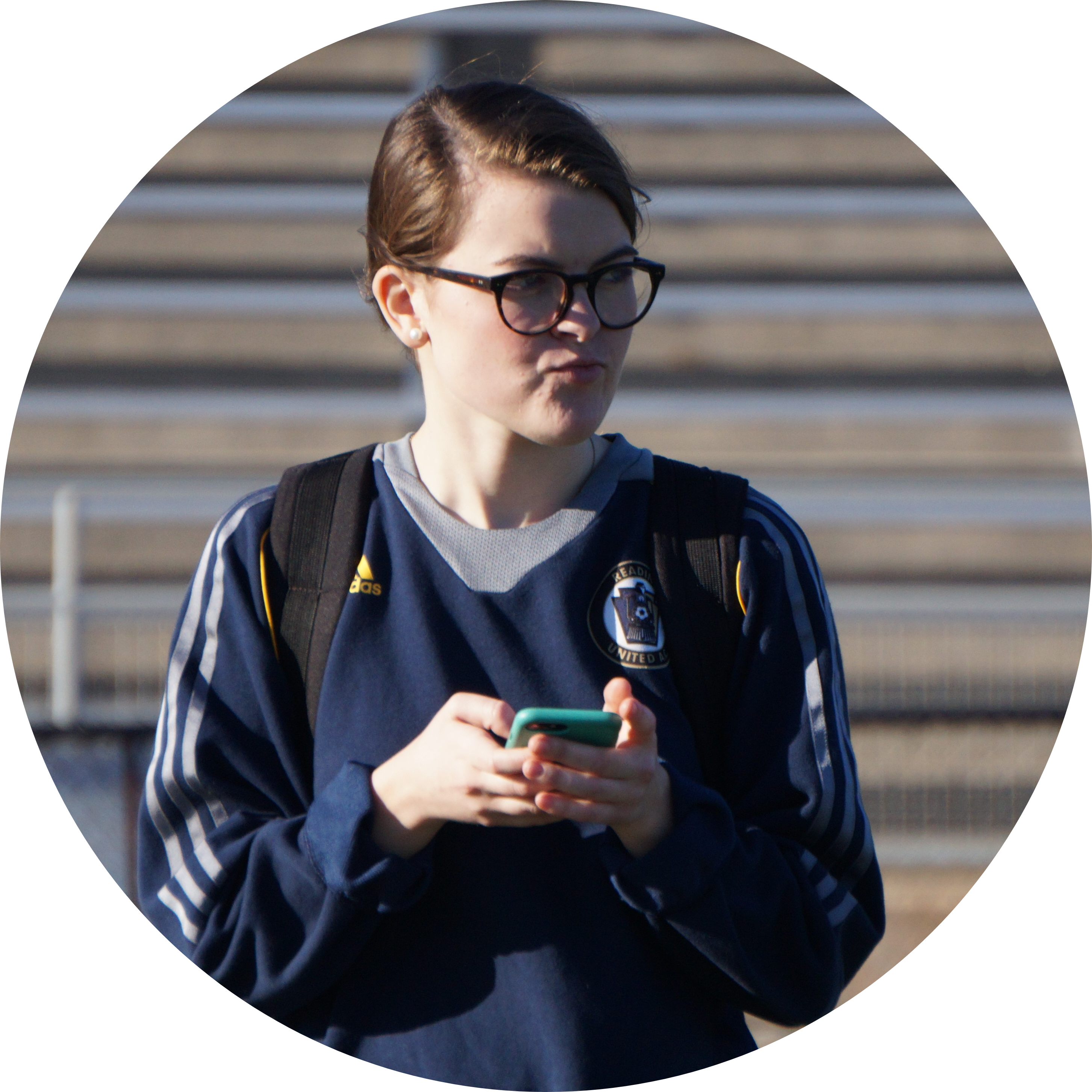 Ashley Foltz
Director of Social Media
Reading United AC
"Broken the mold"
+
Ashley Foltz serves as the Director of Social Media for Reading United AC. Foltz has been an essential part of Reading’s social media and communication efforts for the past three seasons, and is now entering her fourth year with the club. She has embraced her leadership role in the club and has become the go-to person for graphic design and daily upkeep of the Reading social media accounts. Foltz has seen major professional progress at Reading United starting as a game day intern and working her way up the system to her current role. Foltz’s constant progress and ability to take initiative has broken the mold of expectations for summer interns and has earned her a key leadership position within Reading’s organization.“Being a woman in sports means that I get to show other girls and women that we belong in sports. No matter what they’ve been told or what others have to say, sports are for everyone,” said Foltz. 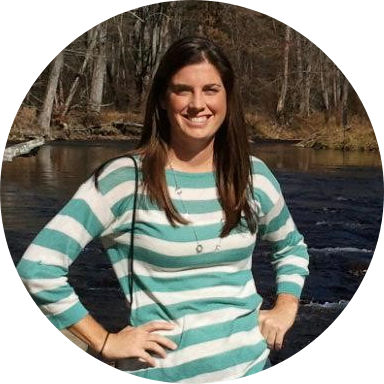 Catharine Bowles
USL Assistant Coach, Florida Elite Soccer Academy Director of Coaching, Florida Elite Oakleaf
"Endless potential"
+
Catharine Bowles, or as some call her, Coach Kate, is Florida Elite Soccer Academy’s USL Assistant Coach and Florida Elite Oakleaf’s Director of Coaching. Coach Kate is an incredibly dedicated director who has proven time and time again that she will go above and beyond for every player in her program. Her program consistently maintains the highest retention rate in the club and has grown tremendously under her leadership. In addition to her work for the club, Bowles is a recognized high school teacher and advocate for girls sports. She currently teaches multiple business courses, manages 12 VyStar student-manager interns, is an adviser for the Future Business Leaders of America (FBLA) and serves on the high school business advisory board. In her time coaching with Florida Elite Soccer, Bowles finished fourth in the conference in the first year in the league and was the assistant coach for the 2019 USL League Two Team Fan’s Choice award. “Women working in sports represents endless potential. I see a new, evolving landscape for women in sports, especially in soccer. I see hundreds of young girls pursuing their dreams and female coaches guiding and instructing. My hope is that women will continue paving the way for young girls to achieve their endless potential,” said Bowles. 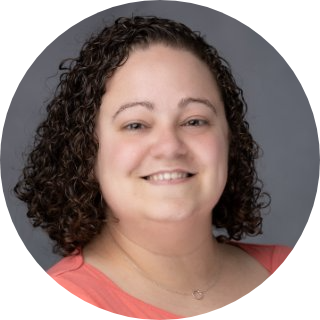 Emily Dugan
Director of Social Media
Lionsbridge FC
"Driving Force"
+
Emily Dugan serves as the Director of Social Media for Lionsbridge FC and has been with the club as a volunteer since 2018. Not only is Dugan the driving force behind the club’s digital and social media presence, she also selflessly devotes much of her free time to the Lionsbridge’s community despite having a demanding full-time job where she handles social media for a local school district. Dugan is extremely passionate about her role at the club and even extends her mentorship to the Lionsbridge digital and social media interns. In her time with the club, Dugan has also developed a seamless match day social media strategy and execution that keeps fans of the club engaged and excited when the team takes the pitch. 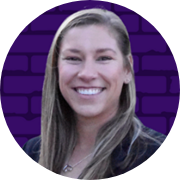 Jen Rader
Marketing and Media Manager
Utah Youth Soccer Association & Ogden City SC
"Years of dedication and success"
+
Jen Rader serves as the Marketing and Media Manager for the Utah Youth Soccer Association and Ogden City SC. From her time as a youth player starting at four years old to her collegiate playing career, Rader has given every ounce of her energy to the sport. After playing in college, Jen accepted a position with Real Salt Lake (RSL) where she spent 6 seasons working in the ticketing department creating promotions and partnerships with non-profit organizations across the state. During that time, Rader coordinated and implemented league wide initiatives such as Breast Cancer Awareness, Childhood Cancer Awareness and Pride Nights at Rio Tinto Stadium. The highlight of Rader’s tenure at RSL was creating Leo’s Paws for the Cause, an initiative that highlighted a different non-profit at each home match to help build awareness and give back to the community. After leaving RSL, Rader joined Utah Youth Soccer Association as a marketing manager and utilized her experience working in sports to help launch Ogden City SC. Rader’s passion for being a woman in sport has translated into years of dedication and success in her professional and personal life. 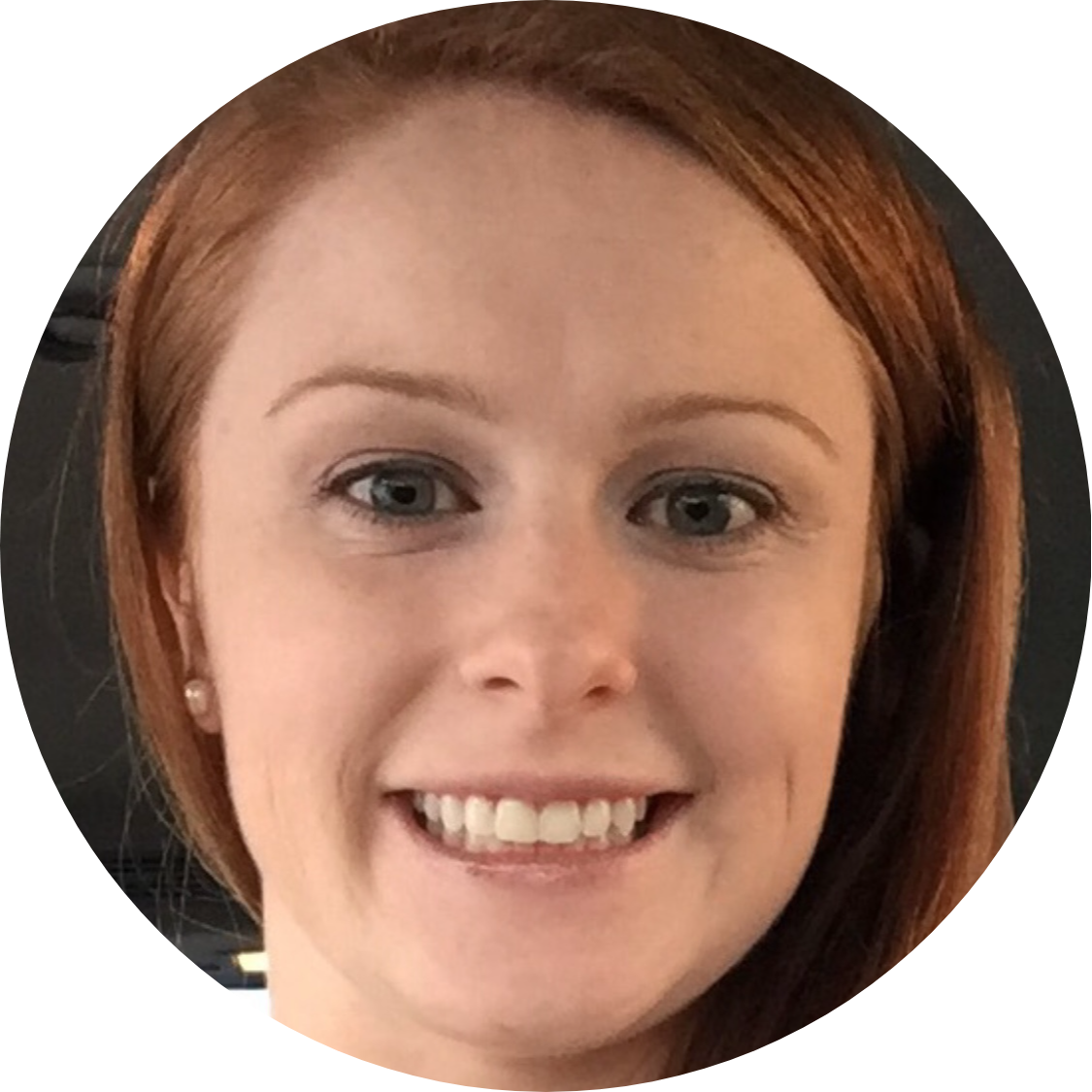 Kelly Meyer
Marketing and Communications Director
Kings Hammer SC
"Leadership and passion"
+
Kelly Meyer has been with Kings Hammer SC for eight years acting as the Marketing and Communications Director. Meyer has used her social media spunk to evolve Kings Hammer’s social platforms and has majorly increased brand awareness along the way. In her day to day, Meyer works to create engaging content for fans and promotes the benefits of strong partnerships with the club. As a former club soccer player and high school standout athlete, Meyer prides herself on building awareness around pre-professional soccer in the United States. Her leadership and passion for sport and soccer guides her work at Kings Hammer and provides the club with the necessary tools to promote the presence of this League Two team within the community. 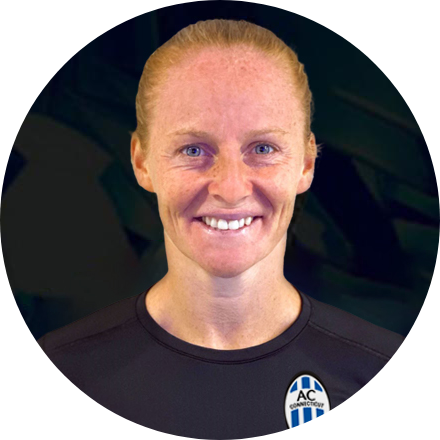 Sarah Brady
Director for Women & Girls Program Development
AC Connecticut
"Sincere interest and care"
+
Sarah Brady is AC Connecticut’s Director of Women & Girls Program Development. In her years with the club, Brady has shown extreme passion and dedication to seeing the development of young women in their athletic careers. In recent months, Brady has been taking on the development of a girls U19 Academy team in preparation for a 2022 season. Brady is a leader at AC Connecticut and is often willing to roll up her sleeves and do anything to help the club grow. Her passion for the game translates into sincere interest and care for each player she coaches and co-worker she works with. Brady truly finds joy in watching players grow and develop into not just good soccer players, but good people as well. 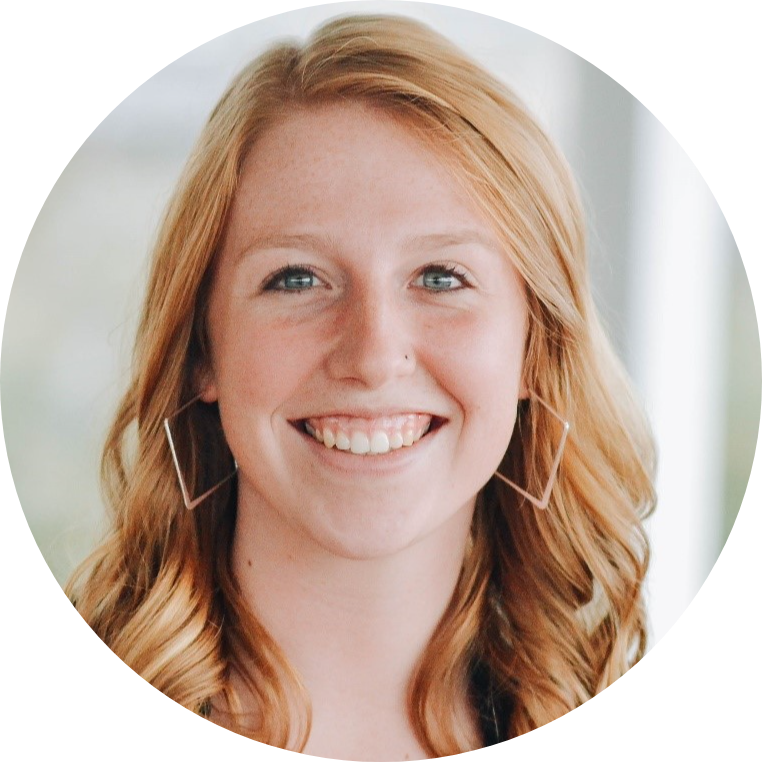 Sydney Tatam
Operations Manager
Des Moines Menace
"Helping other women and girls"
+
Sydney Tatam is the Operations Manager for the Des Moines Menace and has been with the club for a little over a year. In her day to day, Tatam leads the Menace’s internship program, merchandise initiatives, League Two soccer & event operations and all youth programs. Her love for customer service and going the extra mile continues to drive the Menace forward and has guided Tatam in creating a superb soccer environment for League Two players and coaches by providing direct operational support and leadership. Tatam is known for her positive attitude within the office and her ability to serve as the backbone of Menace game-days, which can often drive crowds of over 3,000 fans. “I would look around my college classes, other sports teams and front offices, and the media and all I saw were men in sports. It can definitely be intimidating at times. I love showing up to work each day knowing that I’m helping change that narrative. Not only have I proven to myself that I belong in this industry by getting hired, but I hope that I am helping other women and girls see that they belong right alongside me,” said Tatam.