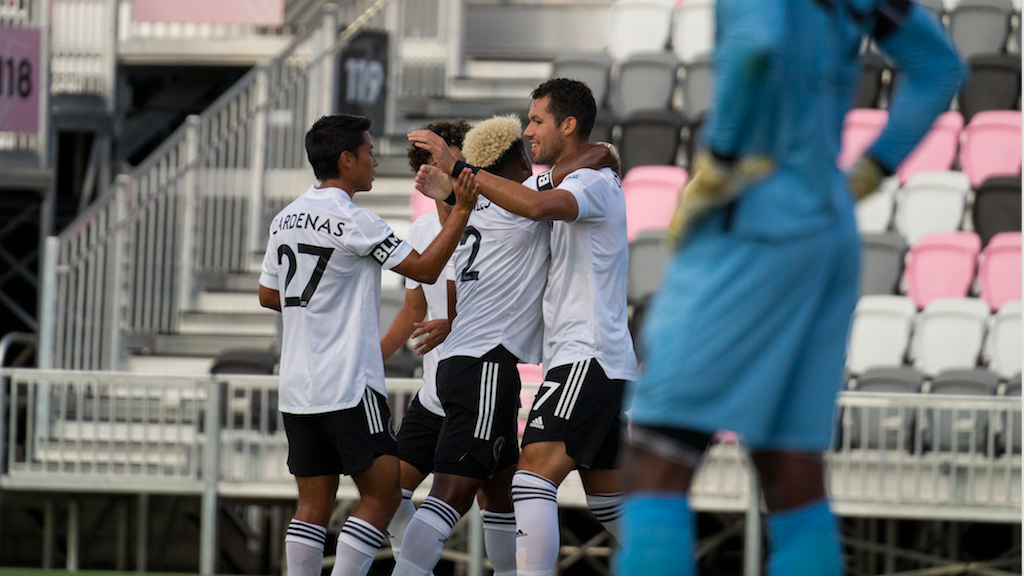 Ricky Lopez-Espin is enjoying a breakout season so far for Fort Lauderdale CF, scoring five of the team’s seven goals in its opening six matches - including a bonafide Goal of the Season contender which he scored from midfield against Tormenta FC.

At 6’3”, Lopez-Espin’s rare combination of size, speed and smarts has made him difficult to deal with for opposing USL League One defenses. Despite his early success, he is quick to make sure that others get credit too.

“I attribute my success to my teammates,” said Lopez-Espin. “Without them I’m not scoring goals; without getting the passes they’re giving me, without getting chances through their hard work, the ball doesn’t hit the back of the net.

“Secondly, I attribute it to the coaching staff having confidence in me and giving me the opportunity to play, and the front office for giving me the chance by signing me and having belief that I could be a good teammate and help the team by scoring goals and doing my job.”

Yet after a challenging beginning to his professional career, Lopez-Espin does admit he is pleased to finally be in an environment where he is excelling. A draft pick of Major League Soccer’s Real Salt Lake back in 2018, Lopez-Espin made one MLS substitute appearance for RSL and spent most of his rookie season on loan with Real Monarchs in the USL Championship.

He left the club to join League One’s Lansing Ignite in 2019, where he scored three goals in eight appearances. But he was released by the club in the middle of the season, and it wasn’t immediately clear where he would land.

To Lopez-Espin’s credit, he put his head down and kept working, and was rewarded with a spot on Fort Lauderdale CF’s roster for the club’s first season in League One. For Lopez-Espin, it was a moment of vindication.

“On a personal level, I’m just proud that I worked extremely hard during the offseason and before and during preseason,” said Lopez-Espin. “So, I would say it’s my teammates first and foremost, my coaching staff for giving me the strength and believing in me, and then my hard work and belief in myself and my abilities. I think I’m reaping the benefits of all those things coming together.”

Before his professional career began, Lopez-Espin played two seasons in League Two: one with Lane United FC, and one with Tampa Bay Rowdies U23. Though an ankle injury kept him sidelined for a fair portion of his time at LUFC, it was obvious to those at the club that he had the ability to play at the next level.

Never in doubt. @rickylopezespin's lob from midfield takes Goal of the Week for Week 4. pic.twitter.com/V5J0CuEybQ

“I remember coming to training the first day Ricky arrived. I was immediately struck by his combination of power, skill, and nose for goal. He definitely stood out among strikers we had at the club,” said LUFC Managing Director Dave Galas. “The talent and desire were always there, so I am not at all surprised to see Ricky scoring for fun this season and sitting atop the League One scoring charts.”

Though Lopez-Espin didn’t log many match minutes at Lane United, he still describes the experience as invaluable during his young career.

“I think the first thing that I learned when I was with Lane United, and in my brief time with the Tampa Bay Rowdies U23 team, is how professional and how serious you need to be if you want to become a professional soccer player,” said Lopez-Espin of his time in League Two. “While you’re in college, yes, the level is very high but you obviously have a lot more going on. When you’re playing League Two in the summer there’s no distractions, it’s just soccer. It’s up to you to see how hard you want to push yourself, how hard you want to work.”

Lopez-Espin was coached by current FC Tucson Head Coach John Galas during his time with Lane United, and says the professionalism Galas required at the club helped him tremendously.

“I was playing with guys who had so much quality and they were a lot older than I was,” said Lopez-Espin. “It kind of opened my eyes out of the college bubble to see that if you really want to make a living at this as a professional soccer player, you have to dedicate yourself like these guys would. I can’t thank Lane United enough for giving me my first League Two experience.”

Given the difficult start Lopez-Espin faced in his professional career, he has a sense of deep gratitude for the people who have helped him find a landing spot where he can finally showcase his ability.

“What is there not to like?” said Lopez-Espin of playing for Fort Lauderdale CF. “You’re training next to the First Team, where everyone aspires to be. They have everything, between the facilities and the coaching staff everything is first class there. We have the easy part which is to just go and play soccer and enjoy doing what we love for a living.

“I’m so blessed and thankful that I get the chance to put on a Fort Lauderdale CF jersey every day and work hard with my teammates and be around top-class people, not just on the field but off the field as well. I can’t thank them enough. I’m super grateful.”