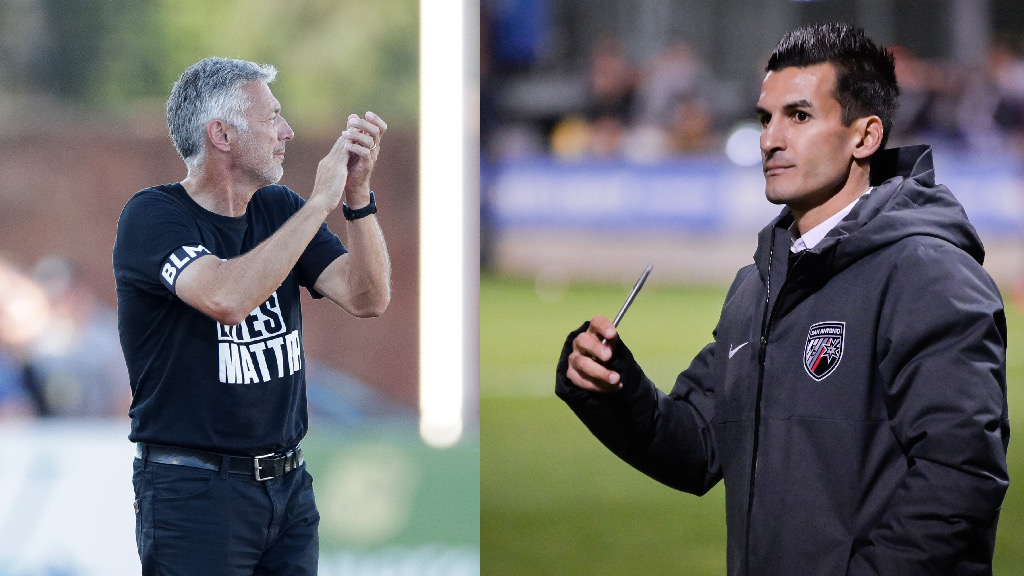 When OKC Energy FC hosts San Antonio FC at Taft Stadium this Saturday night, head coaches John Pascarella and Alen Marcina will be on opposite benches. Though they’ll each be trying to take three points off of the other’s side, the pair share a major stop on their coaching journeys - and as a result, share a mutual respect as well.

Both Pascarella and Marcina coached the Des Moines Menace in League Two, and they did so just one season apart. The Menace qualified for the playoffs in each of the last six seasons and have won the Heartland Division four out of the last five. In doing so, the club has not only pushed many players on to the professional ranks, but coaches too.

Pascarella was announced as the new head coach of Energy FC in December 2019. His experience in MLS, where he spent eight years as an assistant and goalkeeper coach for Sporting Kansas City and two as an assistant coach with Minnesota United, caught the eye of the hiring committee.

But his most relevant prior experience as a head coach came in the summer of 2017 with Des Moines.

“It was the first time I could implement things I'd learned during my time in MLS,” said Pascarella of how coaching in League Two prepared him for the jump to the Championship level. “I wanted to see if I could get players to understand my vision of how to play the game, as well as successfully create a culture that allows the players the freedom of expression within guidelines and reference points.

“Could I teach them, influence them, convince them that they could be so much more collectively if they were willing to apply their special ability when needed while also playing their primary role within the team, for the team - always?  This experience & time with the Menace allowed me to experiment with different ideas and concepts which I was then able to go back and reflect on and evaluate for effectiveness.  The amount of growth opportunities in one season was tremendous.”

Those strategies seemed to work on the pitch. Pascarella’s Menace side made the playoffs, and knocked off the defending champion Michigan Bucks to reach the Central Conference Final.

“The players were so comfortable with the system that later in the season, we could play two completely different groups of players on successive nights and look very similar in style in both games,” said Pascarella of that 2017 team. “Everyone understood how we wanted to play and what that entailed in each moment of the game.  That season in Des Moines taught me how to instill and consistently reinforce a game model.”

When Pascarella took a role with Minnesota United that following offseason, Marcina was brought in to replace him for the Menace’s 2018 campaign. After an eight-year playing career which spanned seven countries, Marcina’s coaching path made a few stops in the lower divisions of American soccer before it reached Des Moines.

It was the Menace job which served as the springboard for Marcina to reach the USL Championship.

“It was a fantastic experience,” said Marcina of coaching in League Two. “The Menace are one of the most prestigious clubs in League Two. It provided an incredible platform for myself, previous coaches and players to be seen. We were successful on the field going undefeated in the regular season. We were also among the league leaders in promoting players to the professional ranks, which was an important goal too.”

The 2018 Menace put together a historic regular season, compiling a record of 13-0-1 and winning the regular season title with a haul of 40 points from 14 matches. Though, like Pascarella’s side, the team was knocked out in the Central Conference Final, it was still an important year in helping Marcina get noticed by San Antonio FC - he joined the club as an assistant in 2019 before being promoted to head coach for the 2020 season.

“As a club and a staff there was a clear vision, and the players bought into that vision,” said Marcina of what made the 2018 season so special for Des Moines. “The players wanted to compete for championships and experience a professional type of environment while growing their mindset of how to be a pro.”

Though Pascarella and Marcina coached the Menace in different seasons, they knew each other before either went to Iowa. The two became acquainted in 2013, when Pascarella was with Sporting Kansas City and Marcina was with the San Antonio Scorpions. The pair would discuss possible player loans as both worked their way through the coaching ranks.

Now that both are USL Championship head coaches, they share an admiration for the similar paths they took to get to where they are today.

“John is a fantastic coach,” said Marcina of the man who will be his counterpart on Saturday night. “He is a great human being as well. He also did fantastic in his time with the Menace and I look forward to seeing him and competing against him.”

“I have a tremendous amount of respect for what he's done everywhere he's been,” said Pascarella of Marcina. “He's been successful at every level he's managed. I think it's really cool that we've both been involved with the Menace. It's a great breeding ground for coaches.”

Marcina’s SAFC currently sit atop the Championship’s Group D, on 10 points and having not yet lost a game this season. Pascarella’s Energy FC side will try to change that, and a win for the Oklahoma club on Saturday would close the gap to SAFC to just two points.