Cedar Stars' Arevalo is Ahead of the Curve 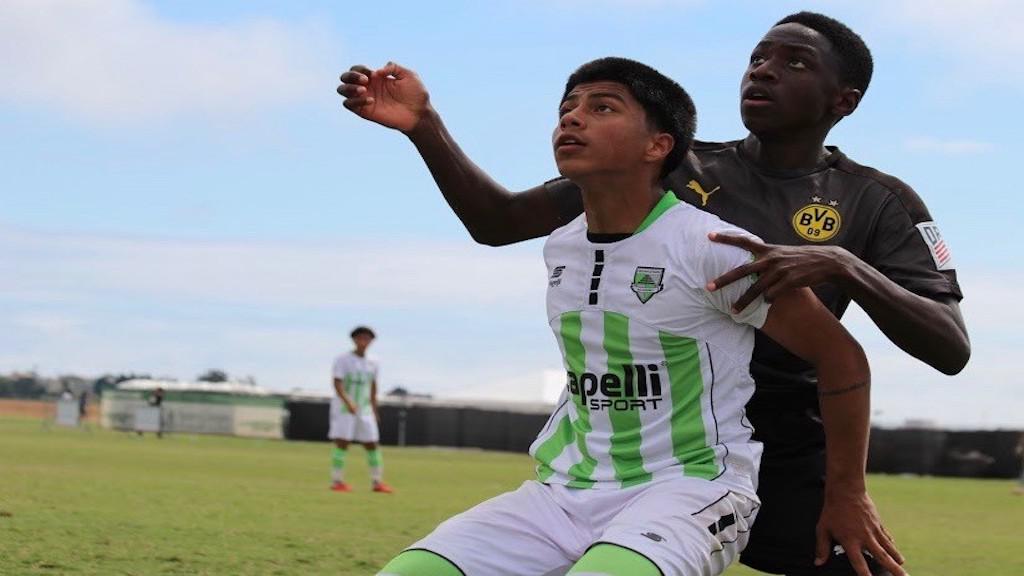 When most people think of USL League Two players, the image that comes to mind is of players ages 18-23 who are among the elite in college soccer. But the league is also a valuable platform to develop younger players who haven’t yet entered college by getting them meaningful minutes against top competition.

At 16 years old, Ronald Arevalo is one such player.

Arevalo joined the Cedar Stars Academy in Bergen, New Jersey when he was just nine years old and has been progressing through the ranks ever since. The young forward recently impressed with the Cedar Stars Academy Bergen U17 Development Academy team and earned minutes with the organization’s League Two side, Cedar Stars Rush. By giving Arevalo the chance to play in League Two, the club has provided him with a defined pathway from youth soccer to the top pre-professional competition in the country. In four league appearances in 2019, Arevalo fit right in against players much older than himself, and scored a 79th-minute equalizer against the Long Island Rough Riders in Cedar Stars Rush’s season finale.

“Ronald was a player we had to have patience with. We all knew he had talent and ability, but we needed to wait for the right moment,” said Cedar Stars Rush Technical Director Juan Santamaria. “That right moment came during our preseason last August 2018. Apart from his natural technical ability, he showed a work ethic and determination we haven’t seen before.

“It was impossible to take him off the field. Once we saw that, we all knew he deserved a chance to play with our League Two team.”

Arevalo hasn’t just turned heads locally, but nationally as well. He was recently called up to the United States U-16 Youth National Team camp that trained in Chula Vista, Calif. last week, joining players that currently feature in the USL Championship and USL League One.

Earning that opportunity was a big achievement not only for him but for the Cedar Stars organization.

“It shows we have a strong belief in what we do,” said Santamaria of Arevalo’s youth national team involvement. “The staff does a great job with not just player identification at the young ages, but nurturing that talent with a focus on development. We are all very excited he got called up to the national team camp.”

For Santamaria, being able to see how Arevalo handled himself at the League Two level was essential to discerning the extent of his abilities. In his four starts, Arevalo proved he was capable of competing, and showed that he was ready for the next step in the Cedar Stars Rush and Capelli Sport player pathway: Europe. Cedar Stars Rush are owned by Capelli Sport President and CEO George Altirs, who is also the majority owner of Danish First Division side HB Køge. Capelli Sport has built a player pathway between its clubs and others like MSV Duisburg of the German 3. Liga (where Altirs also holds ownership shares), allowing players like Arevalo to get unique training and development opportunities.

“After Ronald’s performance in League Two, we got on the phone right away with our partners in Denmark and within a couple of days had everything set for Ronald to attend preseason training with them this past summer,” said Santamaria. “It was a great experience for Ronald as well as eye-opening.”

As a League Two club, Cedar Stars Rush has been anything but shy about giving its young players a shot to showcase themselves.

Four players aged 18 or younger earned League Two minutes for the club this past season, and for Santamaria the league is massively important to evaluating stages of a player’s development.

“You are beginning to see more young players going through the system, and League Two should be used for that,” said Santamaria. “It is such a competitive league, especially our division, that if one of our young players does well, we now can begin to have an idea of what he is really capable of.”

As Arevalo continues to come up through the Cedar Stars system, he’ll have plenty more opportunities to advance his promising young career.