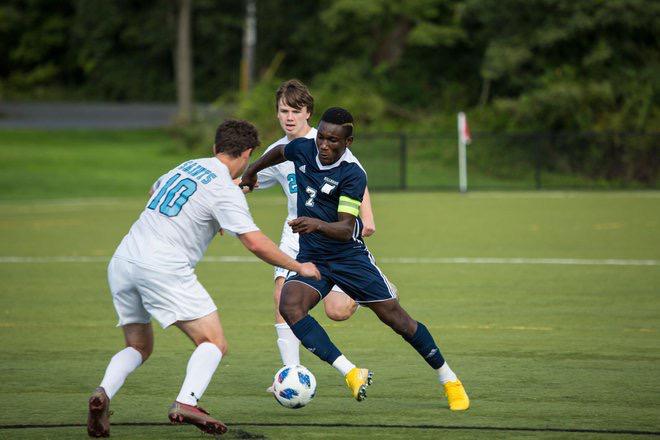 For a Stanford men’s soccer program that has won three national titles in the last four seasons, expectations headed into the 2019 collegiate season are high. As the #1 prospect on the USL League Two Top Prospects list, Ousseni Bouda is no stranger to living up to the hype.

During the League Two season with Black Rock FC, Bouda racked up eight goals in just six games, including a hat-trick in less than 30 minutes against Boston Bolts. He earned a spot on Top Drawer Soccer’s Freshman Best XI ahead of his first campaign with the Cardinal.

“He’s got talent, he’s got something very special,” said Black Rock CEO Jon Moodey. “But what’s really so refreshing is he’s about everybody else. If you’re doing a coaching session, he’s so attentive. He goes up after every game and asks ‘what can I do better?’ He’s always asking those questions and that’s why he’s going to be very successful.”

Bouda was born in Burkina Faso and played at the Right to Dream Academy in Ghana before coming stateside. During his high school career with Millbrook, Bouda led the team to three state championships and was named 2018 Gatorade Player of the Year. Even at such a young age, Bouda has a rare combination of intelligence, athleticism and leadership ability that should help him thrive at a powerhouse program like Stanford’s.

“I honestly can’t say anything bad about the kid,” said Moodey. “Pleasure to coach him, remarkable talent, the sort of player everybody would like to coach. Not just because he scores game-winners, but because he makes your team better through example. He’s not an outspoken guy, he’s not loud in the locker room, but he’ll say things at the right time. He’s very encouraging of his teammates.”

Stanford begins its quest for a fourth national championship with two high-profile opponents over college soccer’s first weekend. They open the season at Penn State at 7 p.m. ET on Friday, possibly the first chance for fans to see Bouda at the collegiate level. The Cardinal then travels to play #3 Akron on Labor Day. Bouda will be expected to hit the ground running as he did with Black Rock, but he’s shown he’s more than capable of doing so.