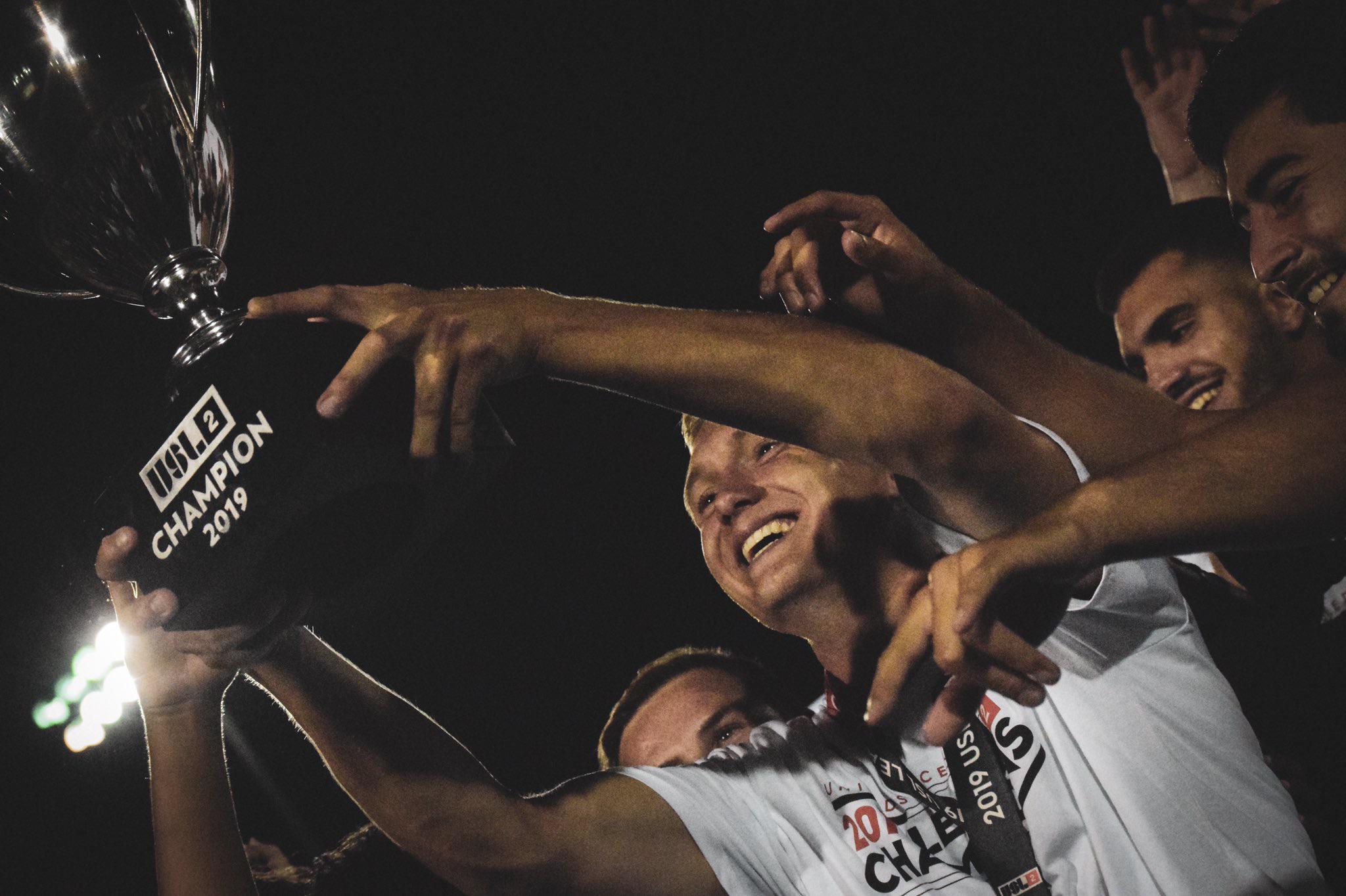 FLINT, Mich. - For the Flint City Bucks organization, the 2019 League Two title is a fourth in club history and a third in the last six seasons. Success on the pitch is nothing new for the Bucks, but there’s something different about this year’s trophy - it’s the team’s first in Flint during its inaugural season in the city.

The relationship between the Bucks and their new hometown was a symbiotic one from the start. From national news coverage of Flint, most people immediately associate the city with its recent water crisis. But that’s something residents are eager to put behind them. The area is hard-working, resilient and recovering, but has struggled to portray the sense of positivity that permeates the community with the rest of the world. The Bucks, in just one year in Flint, have already created a feel-good story to rally around and become a symbol of the values that “Flintstones” pride themselves on.

"Now that we’ve attached ourselves with the community of Flint, I think the people of Flint have really got behind us, a bunch of young men that are out there as warriors and representing the city of Flint," said Flint City Bucks assistant coach Andy Wagstaff of the team’s identity. "I think you can see the way that we play, we’re a perfect reflection of the city. We’re backs-to-the-wall, we roll our sleeves up and we get on with it, we come back and we fight hard." 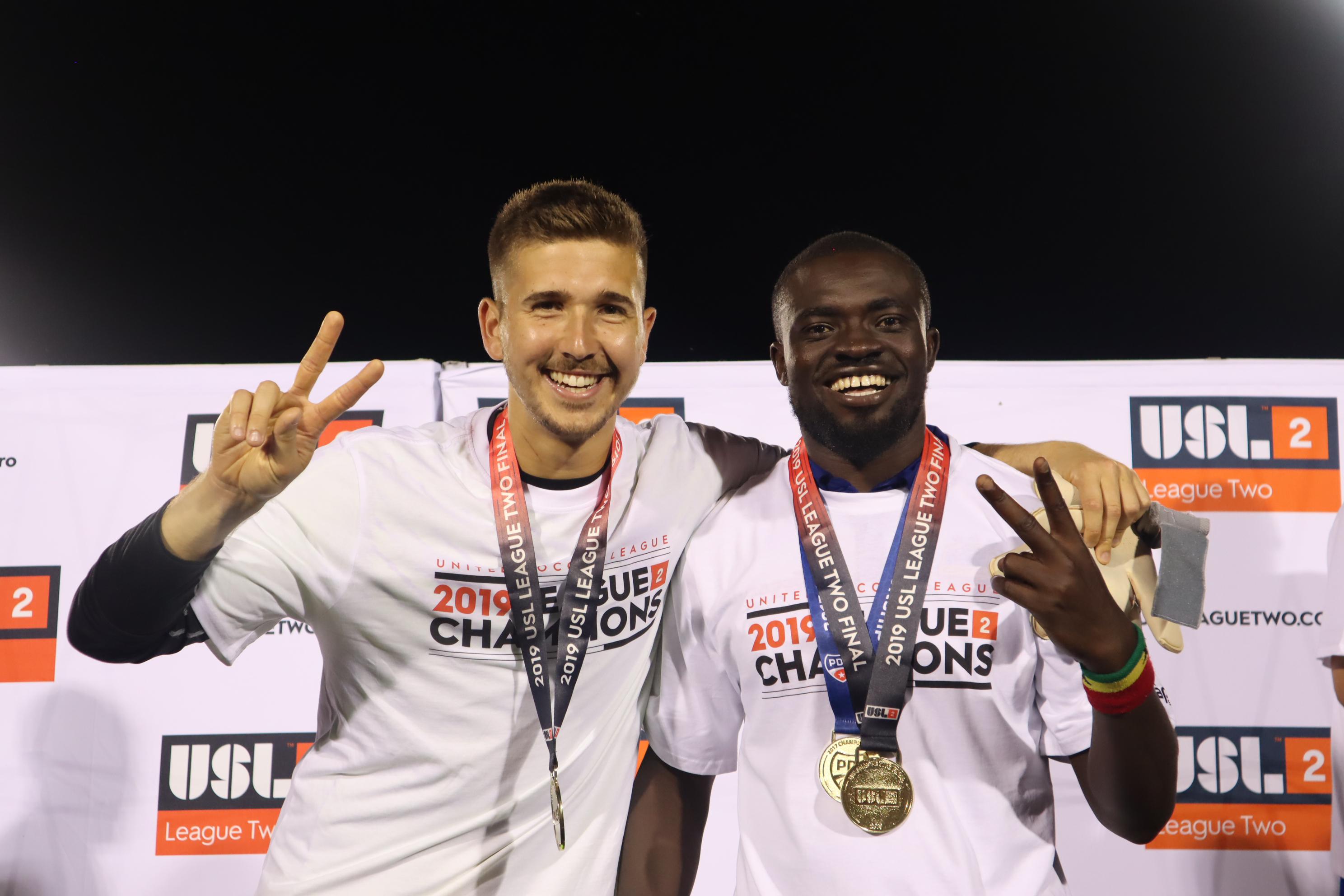 The Bucks were far from dominant during the regular season, finishing second in the competitive Great Lakes Division. They squeaked into the playoffs with the help of West Virginia Alliance FC, who had already been eliminated from contention but played to a 2-2 draw with Cincinnati Dutch Lions and allowed Flint to return to the postseason after its first absence this decade in 2018.

Flint City then had to travel to the regular season champion Des Moines Menace in the Central Conference Semifinals. In a game most expected them to lose, Flint produced an instant classic. Trailing by a goal late, Ayuk Tambe scored in the last moments of regulation to send the game to extra time. The Bucks fell behind again before goalkeeper Gustavo Vasconcelos, who had been introduced as a forward off the bench as one final roll of the dice by head coach Demir Muftari, equalized by chipping the Des Moines goalkeeper with the last kick of the game.

"The ball by Justin [Ingram] was an amazing ball, and the ball went through and it was like in slow motion," said Vasconcelos of his goal. "I just swung my foot and was like whatever happens, happens. When I saw the ball inside of the net, I thought, ‘when is this going to happen again in my life?’"

The Bucks won the ensuing shootout, then defeated Kaw Valley two days later in the Central Conference Final. Flint hosted another of the regular season’s best in FC Golden State Force in the League Two Semifinals, and dispatched the Western Conference champion 1-0 on a 78th minute Yuri Farkas penalty kick. Returning to Atwood Stadium for the final, the Bucks rewarded the record-setting 7,198 fans in attendance with a similar display. 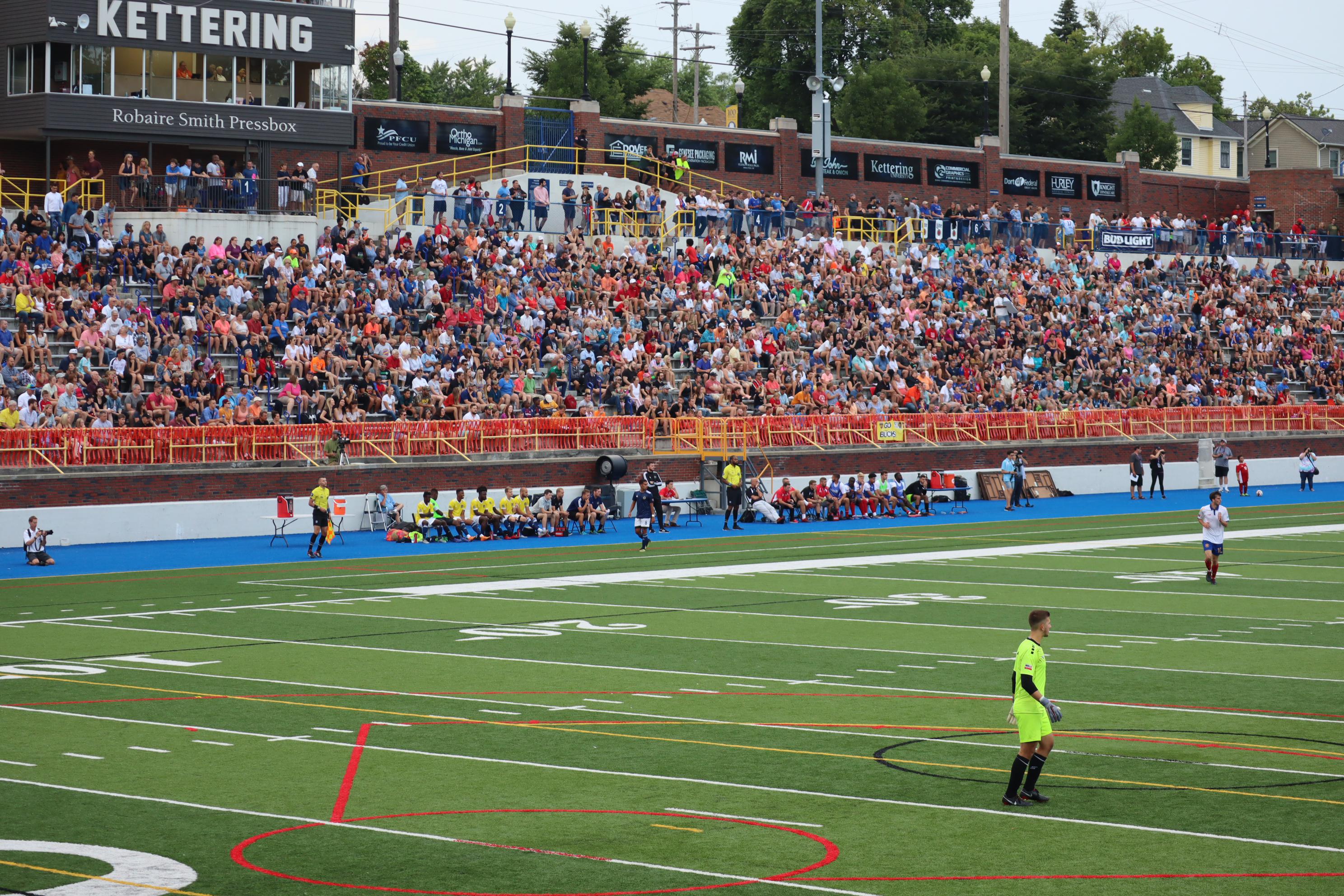 Both the semifinal and the final showed Flint City’s ability to follow what has been a blueprint for success in knockout soccer in competitions all over the world: defend consistently, stay patient in tight games that create few opportunities, and pounce when that opportunity finally arrives. They had to wait more than 100 minutes for their chance in the final, but Tambe made the most of it by smashing home a spot kick in the 110th minute. That one goal again proved to be all the Bucks needed.

"Going into those last minutes, that’s one of the things — we know we can do it," said Muftari of his team. "We’ve been in difficult situations late in games before, and we’ve come through on top and we’ve been able to be successful in those moments."

Grit and determination were the Bucks’ keys to success all season, values that are appreciated by the city that supports them so ferociously. For owner Dan Duggan, that was what separated this year’s squad from every other Bucks teams since 1996.

"24 different teams, they’re all different. This team may not have the great talent that some of our teams have had, but it’s got the largest heart," said Duggan. "God bless them for everything that they’ve done, and they deserve to be where they are." 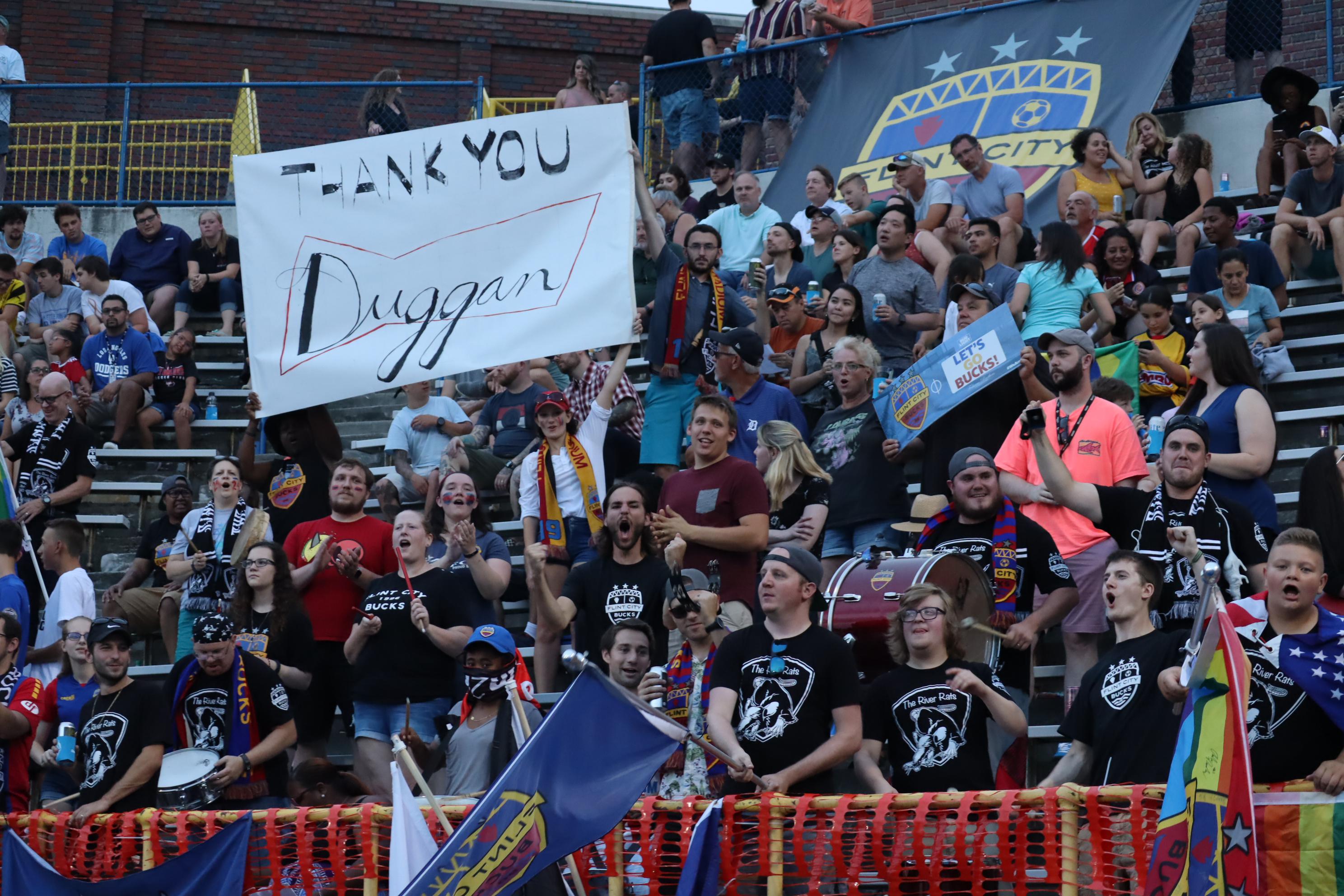 In a city that boasts a fine athletic history but only one professional sports team (the OHL’s Flint Firebirds), the Bucks were able to feed a hunger for local sports during the summer months. Through the work of Duggan, club president Costa Papista, and other members of the Bucks front office, the team gained a passionate following almost immediately.

"Coming to Flint for the first year and seeing this corporate support, the civic support, [supporters group] the River Rats - the town has embraced us," said Duggan of the club’s successful first season in Flint. "Costa Papista is a big reason from our standpoint, he’s done a wonderful job in this community with the minor league hockey team and he’s built a very good reputation for himself."

For all of the efforts of the front office, the aforementioned River Rats - Flint City’s supporters group - brought a passion that few people expected. Flint resident Michael Allard started the River Rats on Facebook with the simple goal of creating a dialogue around the team, and it has grown into a group that meets before every match and marches to Atwood Stadium together.

"There’s a lot of things being said about what happens in our community, a lot of negative things, and we just want to make a positive impact with our supporter group," said Allard. "The Bucks have done a great job of supporting that initiative and giving our community something else to talk about." 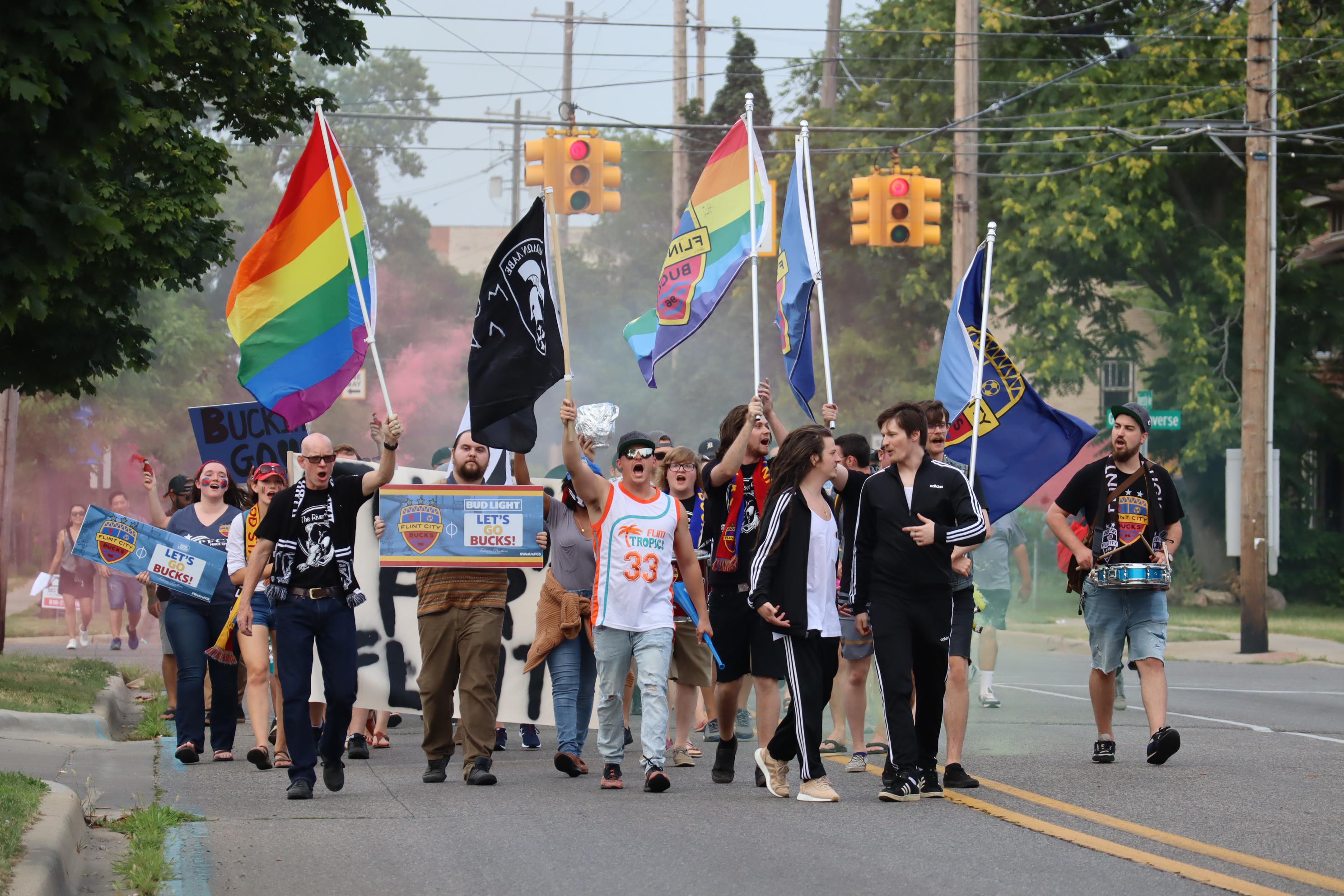 "I think we’ve all been pleasantly surprised about coming here. The following has been great," said defender and captain Charlie Booth. "Even local guys are our fans, local girls, everyone. They cut our hair, they work at the restaurants downtown, so we see all the fans all the time. It’s a great connection we have, all the players and all the fans together. It’s a really good environment for us."

The Bucks have won more titles than any other team in League Two history, yet still captured the attention of the Flint community as an underdog. They did so by embodying the community itself and creating a sense of positivity that brought thousands of fans to Atwood Stadium each week.

"When we were able to pair the local knowledge and sporting expertise of Costa Papista with the historic success of the Bucks, we knew there was a massive opportunity for the community of Flint," said Joel Nash, vice president of USL League Two. "What we then witnessed throughout the season that was culminated by the Final was something truly historic. USL League Two is honored to have Flint be a flagship for the league."

Even with all the Bucks’ past success, this title was unique in the relationship it fostered between the fans and the team. The fans gave the team support that the Bucks hadn’t found in their travels around Michigan over the last two decades, and the team rewarded them with something of which they could feel proud.