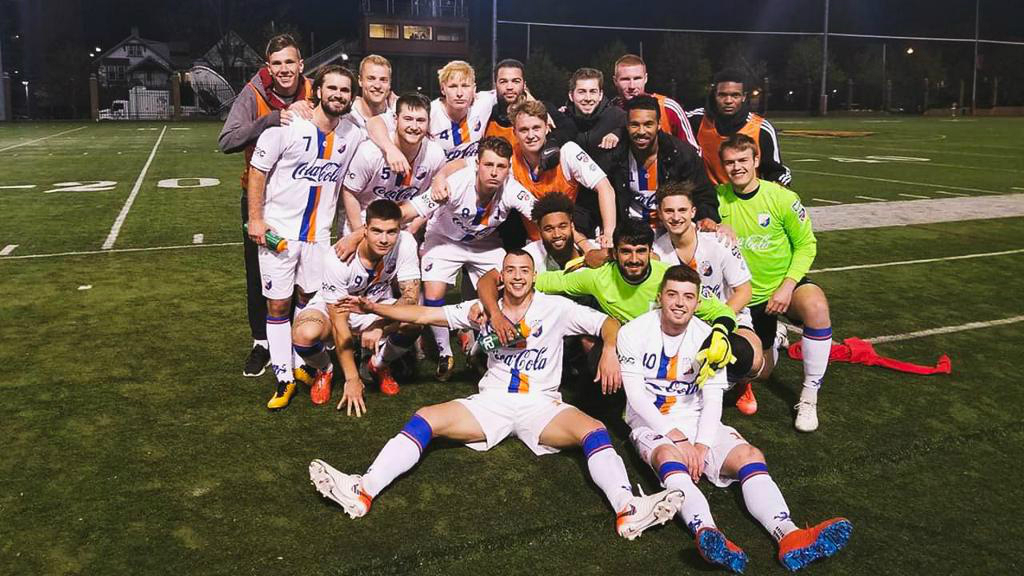 ERIE, Pa. – Making their first appearance in the Lamar Hunt U.S. Open Cup as a member of USL League Two, Dayton Dutch Lions FC cruised to a 2-1 win over the Erie Commodores on Wednesday night at Gannon University.

The Lions came out of the gates quick winning three successive corner kicks in the opening 15 minutes, and the third produced the opening goal of the game. In the 12th minute a quick corner was swung in towards Dayton’s Georgios Charkoutsakis, but instead struck Erie midfielder, Craig Quinn and found the back of the net for the early lead.

Dayton continued to attack heavily throughout the first half and nearly grabbed a second goal in the 38th minute. Peyton Mowery played a ball to Samuel Deroy, whose powerful effort from 30 yards out was tipped onto the crossbar by Erie goalkeeper Alexander Brems.

The Commodores brought things level in the 56th minute when Austin Solomon played a slicing through ball into Craig Strolley, who struck home for the equalizer, but Dayton regained the lead with what proved to be the winner through Tate Robertson 17 minutes later. Harvey Slade began the move as he played a long ball to Robertson on the edge of the penalty area, and Robertson dribbled in and blasted a right-footed strike into the lower-right corner. Dayton moves onto the second round of the USOC to take on the USL Championship’s Pittsburgh Riverhounds SC at Highmark Stadium.

FULL!@DaytonDutchLion defeat @Erie_Commodores on the road thanks to a first half own goal and Keir's strike with just over fifteen minutes left to play. The Dutch Lions advance to the 2nd Round!#USOC2019

Check out the highlights pic.twitter.com/Q4OzYYnSuS

READING UNITED AC 2, PHILADELPHIA LONE STAR 1: In an all-Pennsylvania affair, Reading struck twice in the first half to advance to the Second Round for an eighth consecutive season. United opened the scoring in the first 20 minutes through Jeremy Rafanello, who converted after Filipe Sakamoto dribbled across the Lone Star penalty area and had the ball deflected past him and into the path of Rafanello, whose first-time effort flew past Lone Star goalkeeper Vincent Tasca for the 1-0 lead. Just three minutes later Sakamoto found himself running into the Lone Star penalty area but was fouled just inside, drawing the penalty for Reading. Rafanello cooly placed his penalty to the right of the keeper for what would be the match-winner and a visit to two-time USL Cup-winner Louisville City FC in the Second Round.

.@PhillyLoneStar, playing in their 2nd Open Cup, put up a good fight, but @ReadingUnited move on to the Second Round for a 2nd straight year. GAME HIGHLIGHTS #USOC2019 pic.twitter.com/7645pavPjA

DES MOINES MENACE 1 (3), DULUTH FC 1 (1): It took penalty kicks in Des Moines as both sides found the back of the net in the first half, but the Menace held their nerve from the spot to advance. Des Moines found the back of the net in the opening 10 minutes through Ignacio Goya de Anca. Marek Weber played a ball across the Duluth box that found Goya de Anca who volleyed home. Duluth equalized in the 35th minute from the penalty spot as Carlyle Junior converted the opportunity, but after the teams remained knotted through extra time the Menace’s Oquin Robinson, Rory O’Keefe and Marek Weber all converted and goalkeeper Jordan Bell made one save before Duluth missed in both the third and fourth rounds to send the League Two side on to a home contest against the USL Championship’s Saint Louis FC.

NEW YORK COSMOS B 2, BLACK ROCK FC 1: Black Rock FC’s first trip to the Open Cup was made exciting late as it scored a late goal to level against their professional opposition, but a stoppage-time goal brought their adventure to a disappointing end. Trailing to a first-half goal, Black Rock leveled through Komar Martinez-Paiz, whose deflected shot from inside the penalty area found the back of the net to level the game with three minutes to go. The Cosmos B grabbed a late winner, however, as Bljedi Bardic scored in the sixth minute of stoppage time.