All U.S. Open Cup matches will air exclusively on ESPN+ through 2022 tournament 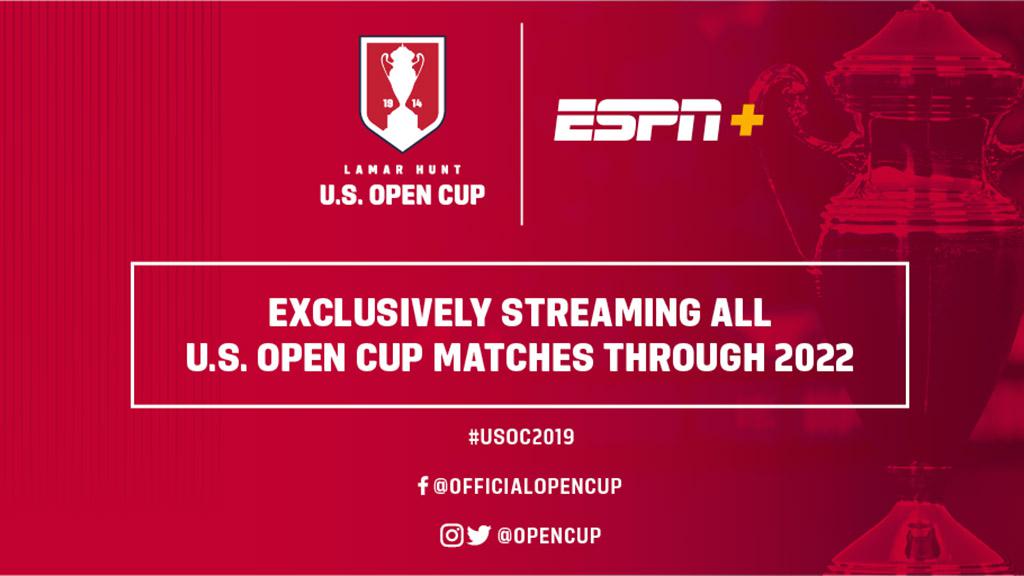 CHICAGO – U.S. Soccer announced on Friday it had reached an exclusive, multi-year media rights agreement with ESPN+ for the Lamar Hunt U.S. Open Cup, U.S. Soccer’s national championship for clubs and the longest-running domestic cup competition in the United States. All U.S. Open Cup matches from the First Round through the Final will air exclusively on ESPN+, the direct-to-consumer sports streaming service, beginning this year and running through the 109th edition of the tournament in 2022. The deal, negotiated by SUM on behalf of U.S. Soccer, includes rights in all languages.

The 2019 U.S. Open Cup on ESPN+ kicks off May 7-8 with the First Round, featuring 38 amateur teams, including those from USL League Two, and Division III professional teams from USL League One spanning the United States. Twenty-five Division II professional teams from the USL Championship enter in the Second Round on May 14-15, while the Third Round, scheduled for May 29, provides a final hurdle before lower division sides get their shot to square off against the 21 U.S.-based Major League Soccer (MLS) clubs on a national stage. Those Division I MLS teams join the competition in the Fourth Round on June 12.

“The U.S. Open Cup is America’s version of what is truly unique about soccer around the world – knockout-format club tournaments that invite the ‘Davids’ and the ‘Goliaths’ from all levels of the sport to compete against one another to determine the nation’s top team,” said Burke Magnus, Executive Vice President, Programming and Scheduling, ESPN. “This exciting property joins a robust collection of soccer’s best domestic cup competitions on ESPN+.”

“We are extremely pleased by the commitment from ESPN+ to broadcast every game of the Lamar Hunt U.S. Open Cup for the next several years,” said U.S. Soccer CEO Dan Flynn. “This landmark agreement demonstrates U.S. Soccer’s commitment to making soccer the preeminent sport in the United States and is the result of growing audience demand for soccer in the U.S. It will provide a national platform for more fans to follow the game in their communities throughout the country.”

“For over 100 years, the Lamar Hunt U.S. Open Cup has been the one tournament that engages the entire American soccer community,” said Gary Stevenson, Deputy Commissioner and President of MLS Business Ventures. “We are confident that this partnership between U.S. Soccer and ESPN will drive the tournament to new levels and create more opportunities for fans to engage with this compelling content.”

This year’s competition will be the 106th edition of the Lamar Hunt U.S. Open Cup, the world’s third-longest-running open soccer tournament. First played in the 1913-14 season, the competition is open to professional and amateur teams affiliated with U.S. Soccer. The winning team qualifies for the Concacaf Champions League and wins $300,000 in prize money.

The team that advances furthest in the tournament from each lower division is also awarded prize money.

The Houston Dynamo are the defending champions, continuing a streak of dominance by MLS teams in the competition. While recent years have seen lower-division sides come close to a winning run, the last non-MLS team to win the U.S. Open Cup since the league began in 1996 was the A-League’s Rochester Rhinos in 1999.